Fullerton, CA-based ConAgra Grocery is among the first to use a slim stick pack, for its Sidewalk Caf/ instant cappuccino. Contract manufacturer/packager The Power Group packs the product on Japanese equipment. 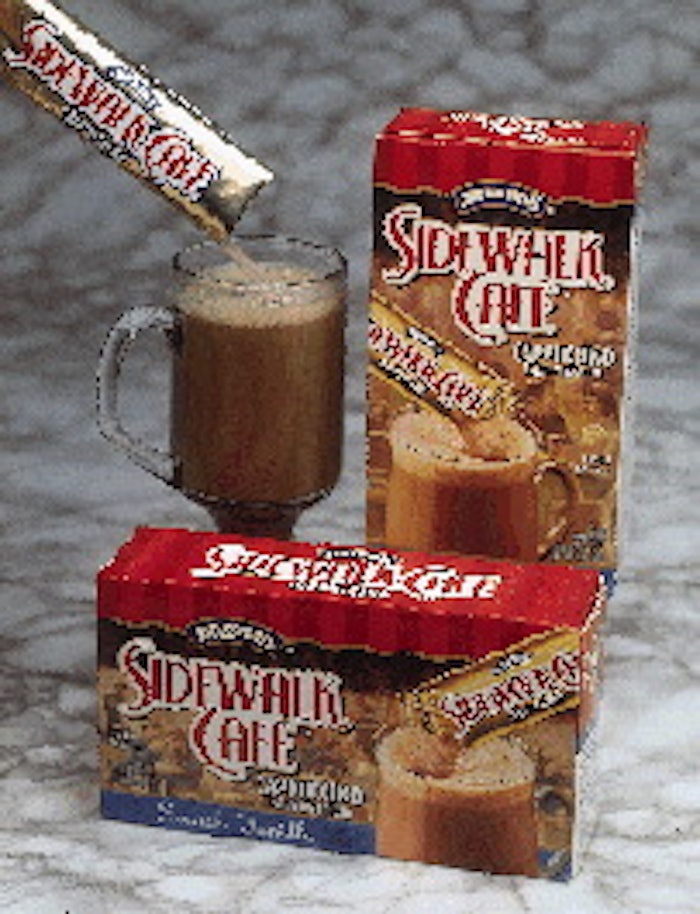 The equipment is manufactured by Sanko, a Japanese company, and distributed exclusively in the U.S. by T.H.E.M. of New Jersey (Mt. Laurel, NJ). T.H.E.M. and The Power Group late last year formed an alliance.

The Slim Stick is recognizable by its long, slender profile. The fin-sealed pack is heat-sealed at the top and bottom. The pack is meant to provide consumers easy handling, opening and dispensing. For packaged goods manufacturers/customers, Power claims that the pack uses as much as 42% less material than a conventional bag or pouch.

The test market is ongoing. Since its launch, Sidewalk Caf/ sales have been expanded to Target department stores nationwide. According to Kay Carpenter, ConAgra Grocery's director of corporate communications, additional retail stores are expected to carry the product in the near future.

"We saw a similar type of package in Japan for coffee," recalls Carpenter, explaining how ConAgra first learned of the Slim Stick. "The Slim Stick is very convenient and easy for consumers to use, and it's unique. No other cappuccino makers use this as far as I know," she says of the pack.

She says it's still too early to determine if the test market is successful, but its expansion into other retail stores appears to be a positive sign. No cut-off date has been set for the test, according to Carpenter.

While the product's ultimate market success will be decided in the long-term, ConAgra Grocery believes the packaging is already a winner. "There may have been a less expensive way to package the product," Carpenter admits, "but the packaging makes a big difference in terms of consumer perception. It's attractive, and it makes it easy for consumers to use."

The Power Group produces the Sidewalk Caf/ packs on a Sanko PN605 stick packaging machine. Power operates the five-lane machine at 40 strokes/min, producing 200 stick packs/min. Power runs a variety of jobs on the machine, according to Rick Steinke, senior engineer, and Mark Schmidt, Batavia plant manager. Batavia is one of Power's three dry product packaging plants. The plant specializes in flexible packaging materials. In all, Power operates 23 manufacturing and logistics facilities, located in the U.S., Mexico and Europe.

The PN605 is equipped with a powered unwind that delivers the 2.3-mil film through a set of rollers. Supplied by T.H.E.M. and manufactured by Hosokawa Yoko (Tokyo, Japan), the film includes 48-ga polyester reverse-printed flexographically in four colors/aluminum foil/1.5-mil polyethylene. "We want to keep out moisture and oxygen," says ConAgra Grocery's Carpenter. The structure provides those barriers, helping the product achieve its one-year shelf life.

The film, converted with five impressions across the web, unwinds past a hot-stamper. Supplied by Sanko as part of the PN605, the unit includes five heads that stamp a batch code onto each package across the web.

The hot-stamped film passes slitting knives that cut the film into five individual "strips." All five lanes are synchronized throughout the process. The film is mechanically formed into a cylindrical shape around each of five forming collars. Film is mechanically pulled downward by horizontal heat-seal bars near the machine's discharge. At the forming collar, a heat-seal bar contacts the film to create a seal on the back of the film. Next, a horizontal heat-seal bar creates a bottom seal.

At that point, each pack is ready for volumetric filling. Filling begins as the dry instant coffee powder is dumped into a hopper at a mezzanine level. The hopper's width matches that of a volumetric product feeder positioned directly below it. The roughly 6"Dx20"W feeder functions as a slide plate. The plate contains five cut-out areas. When the plate is actuated by a pneumatic cylinder, product descends from the hopper into the five areas on the plate. A separate "scraper" levels the amount of product in each of the areas of the slide plate. Product then is dispensed downward into drop tubes that feed the open stick packs below.

Fill volume can be adjusted manually for each of the five feeders with a micrometer screw. After the fill, the horizontal sealing bar heat-seals the top of the filled pack, simultaneously forming the bottom of the next pack.

At virtually the same time that the horizontal seal is made, the machine uses feedback contact cylinders that detect gross mis-fills, or no fills in any of the five lanes. Steinke refers to these as "plungers," each of which is equipped with an electronic sensor. "Each plunger contacts the bag," he says. The sensor helps determine product in the pack, with the plunger retracting if the fill is satisfactory. The plunger does not retract if there is no product, or if the fill is grossly in error. "If it detects [an error], it automatically rejects all five packs off that particular stroke onto a reject conveyor that's supplied with the machine," he says.

The carton's vibrant graphics are printed offset in six colors. One side of the carton is printed so that it reads when the carton stands vertically. The other side is printed so it reads correctly when standing horizontally. Cartons are automatically erected by Power on an older Clybourn machine made by Sasib (De Pere, WI). Cartons are subsequently case-packed before stretch wrapping and shipment to ConAgra distribution centers.

Three machines are set up to run a 23 mm Wx120 mm L Slim Stick, two for a 40x170 size and another for a 36x180 pack. The seventh machine, which was displayed at Pack Expo in Chicago last fall, is used primarily for short runs, demonstrations and sales packs. Tooling costs make it more economical to run a specific film width on a machine (lengths can vary), though they can be changed on each machine to accommodate different pack sizes.

Power wouldn't discuss specific applications, citing confidentiality agreements. Machines are used primarily for coffee products. Neither Power nor T.H.E.M. would describe the specific financial arrangements regarding whether Power buys or leases the Sanko equipment from T.H.E.M. Both companies say they're economically invested in the project in an effort to build sales of the pack.

Melville says a mutual customer guided the two companies to get together. "We did something [forming the alliance and making a financial investment] unusual for a contract packager/manufacturer," he believes. "With our margins, we don't have a lot of room for risk, but we believed the stick pack would be a hot package. So far, it's paid off very well."