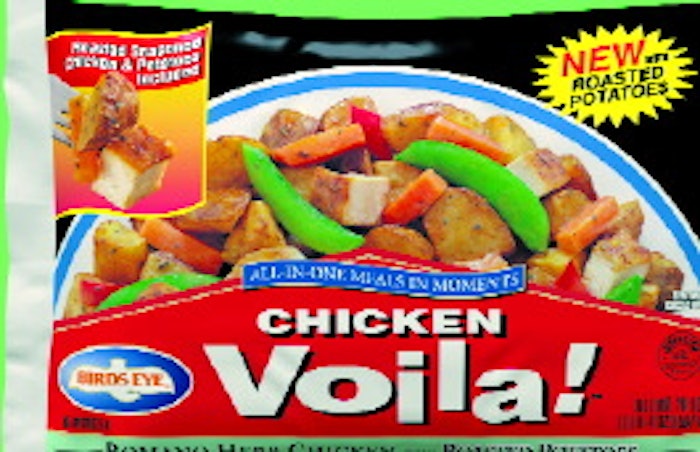 "Voila!" shouts the printed copy on the front of new flexible bags of Birds Eye®-brand individually quick-frozen meals marketed by Agrilink Foods, Inc., Rochester, NY. Introduced nationwide last July after successful testing in five states last spring, Chicken Voila! flavors are marketed as "All-in-one meals in moments." Eight flavors are sold in a 20-oz pack, three in both the 20-oz and a 30-oz size. Both sizes are sold in colorful bags with an unusual transverse-direction resealable zipper.

The low-density polyethylene zipper material comes from Minigrip/Zip-Pak (Manteno, IL). It is applied to a 3-mil coextrusion of film manufactured and printed by Banner Packaging (Oshkosh, WI), a division of Bemis. Banner surface-prints the film flexographically in eight colors, shipping printed rollstock to Agrilink's Fulton, NY, plant for packaging.

Neither Agrilink nor Banner would divulge the specific materials used in the structure, though it's believed to be a PE-based film. They do say the film is commonly used for frozen food packs. The companies also say there are no special barrier needs for the food, which Agrilink says has a six-month shelf life, though they believe that is conservative.

Interestingly, the process involves applying the zipper to the film on one machine (the Inno-Lok), then placing the zippered rollstock on the unwind of vertical form/fill/seal equipment. Why use two machines to do the job?

"We gain better production efficiencies," answers Bob Mitchell, Agrilink's director of technology. "Other zipper technologies slow down the form/fill/seal operation," he believes. "You may receive [phone] calls [from others] who are going to complain about that and say, 'our machine can do that without slowing it down,'" he tells PW, "but we view this [separate step] method as a benefit for us."

The primary reason, he says, is that applying the zipper on the vf/f/s machine involves more steps that slow down the f/f/s process. By running rollstock with the zipper already attached to the film, Mitchell says, "our vertical form/fill/seal machine runs more efficiently." This efficiency, he says, justifies the acquisition of the separate applicating machine, compared to purchasing a separate device to apply the zipper on a vf/f/s machine.

While many zippers are applied completely across the top or down the side of a package, the Inno-Lok machine applies the zipper partially across the front panel. Therefore, less zipper material is necessary. The consumer pulls a tab on the front panel, causing a perforation on the surface of the bag to open, along with the resealable zipper.

Agrilink touts the products with a banner that reads, "All-in-one meals in moments" above the Chicken Voila! name. Each variety consists of bite-sized pieces of seasoned grilled chicken breast meat, sauce, as well as garden vegetables and unusual pasta shapes. No separate pouch for sauce is necessary. The idea of the pack is simple: from freezer to the skillet or microwave, and Voila!, the meal is ready.

According to Donna Rippin, Agrilink's marketing director, the zipper allows the consumer to scoop or pour out the desired amount of product, then reseal the package by closing the zipper. Hence, Agrilink's "pour-and-store" marketing phrase. The company touts Voila! as an alternative to carry-out or delivered foods for on-the-go families, both large and small, as well as singles and "empty nesters."

Last month, Agrilink introduced four new flavors (one is shown above), bringing the total number of Chicken Voila! SKUs to 11. The 20-oz sizes retail for $3.89, while the 30-oz "family size" is priced at around $5.79.