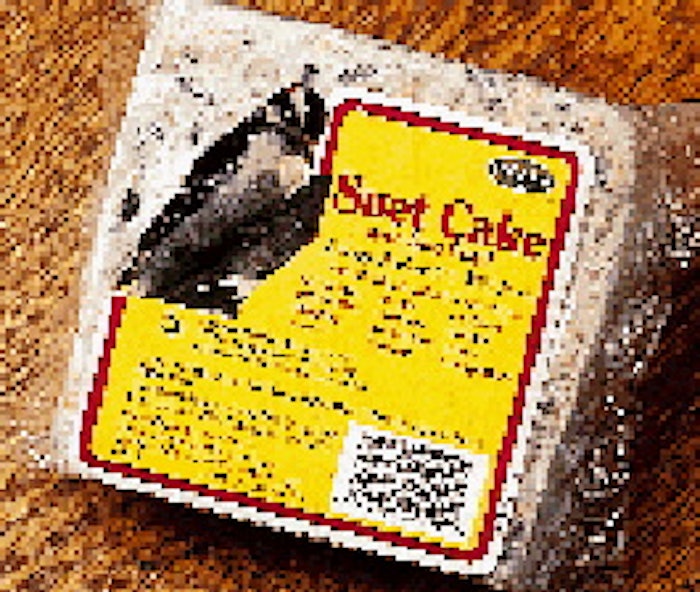 New packs of Heath?s bird suet (above) offer consumers easy opening. At retail, they can stand on the shelf, offer appealing gra

Reducing the amount of material necessary for its bird suet package helped Coopersville, MI-based Heath Manufacturing earn the coveted Green Globe Award for environmental achievement from the Flexible Packaging Assn. (For information on pouches and bags that captured FPA awards, see stories on pages 42 and 62, respectively.)

Until mid-'98, Heath used a 20-mil preformed polyester tray that was filled and overwrapped in 1.5-mil polypropylene film. Forming, filling and overwrapping were done on three different machines, in three separate steps. Now the company thermoforms/fills/seals its packages in-line. Trays are formed from 12-mil polyvinyl chloride/2-mil polyethylene sealant. The 14-mil material is 30% thinner than the previous tray.

In addition to downgauging its forming web, Heath also uses less material on a square-inch basis to make the tray. That's according to Reggie Vanden Bosch, plant manager for the privately held maker of bird feeders, houses and suet cakes. "When we formed the trays with our previous equipment, we used about thirty-three square inches worth of material for each impression," he says. "Now we use about twenty-eight total square inches of material."

The previous tray was produced on a thermoforming machine that produced four trays/cycle, in a 2x2 configuration. The web width was 11.25", and the repeat length to form the trays measured 11.75". Thus, each tray required 33 sq" of overall material. It's safe to say there was a lot of scrap because tray size and forming area were out of synch.

What makes this reduction in overall film use even more impressive is that the new tray dimensions are about 1/2" wider and taller than the previous version. In addition, the new pack has a 1/4" flange around its perimeter to make it easier for consumers to open and handle the package. The previous pack did not have a flange for easy opening.

The current forming web and lidstock structures are converted by Flexicon (Cary, IL). The 3-mil lidding material includes 48-ga polyester adhesive-laminated to a 2.5-mil, three-layer coextrusion that includes a proprietary PE-based peelable sealant layer. The sealant layer adheres to the formed web and allows consumers to easily pull away the lidding and squeeze the bird suet cake out of the formed tray. Flexicon wouldn't divulge film suppliers.

Asked to compare costs of the former tray/overwrap with the present tray/lidstock combination, Vanden Bosch reveals that the current version runs about 1¢ more per pack. Most of that extra cost stems from the peelable sealant material. However, he believes the advantages of the new pack more than offset the added cost.

Vanden Bosch tells Packaging World that the new structure provides the product with a stronger shelf presence that stacks on end much better than its predecessor. The tray, is molded with two "feet" that permit the package to stand. When the new pack stands on the shelf, its labeled front faces the consumer, on a slight angle created by both the feet and the flange. All four flange corners are rounded. And the larger, more colorful label on the new pack clearly is more of an attention-getter.

There was also an advantage in making the switch from polyester to PVC for the forming web. "There are processing advantages for us," says Vanden Bosch. During thermoforming, he says, "if the polyester gets too warm it can crystallize and become white and brittle." PVC, he says, better withstands the process.

But the main advantages of the new pack benefit the consumer. "With the old pack there was no way around getting your hands greasy once you tore off the overwrap," he says.

"The new pack has a flange so the consumer can grab the package, easily peel off the lid [a printed "pull tab" at one corner of the pack instructs consumers], turn the pack upside down and press the back side of the package so the suet cake will come out. The cake can be slid into a little cage that we also make," says Vanden Bosch. The cage with the cake can then be hung outside to attract birds.

Another primary advantage concerns the seal. "The old package really didn't have much of a seal," Vanden Bosch admits. "With this pack, we have a much more secure seal," for better resistance to insect infestation.

Along with its decision to change its packaging materials, Heath also made a long-term investment in equipment. Rather than separate forming, filling and overwrapping operations, the company now relies on in-line tf/f/s machinery. Heath added the equipment in early '98, employing Sunset Sales (Hurricane, UT) as the systems integrator for the project.

Flexicon ships forming and lidding rollstock to Heath. Heath uses a Tiromat Model VA 560 L tf/f/s machine to do the job. Originally made in Germany, the machine was refurbished by Sunset Sales for Heath. Tiromat is represented in the U.S. by Convenience Food Systems (Avon, MA). The machine uses pressure to force the heated forming web downward into a mold, as well as vacuum to draw the material into the mold to form the trays.

Eight trays cycle out of the forming station and are filled by a Model 8P-16 volumetric piston filler mounted onto the Tiromat. The custom-made eight-head filler is supplied by Hinds-Bock (Redmond, WA). It fills the beef fat and particulates that make up the various suet products at temperatures between 110°F and 130°F. Vanden Bosch says the filler operates at speeds 50% faster than the previous volumetric piston filler's 60/min rate, an important machine benefit for Heath.

After filling, the Tiromat heat-seals the lidstock to the trays. But before that occurs, a Crossweb(TM) labeler from Koch Supplies (Kansas City, MO) accurately positions a pressure-sensitive label to the lidding. The 60# basis weight paper labels are flexo-printed by Batts Graphics (Zeeland, MI). Labels are printed in four process and two line colors plus varnish.

Label graphics are more colorful than their predecessors. They also present the Heath name and product variety in a larger, more noticeable typeface.

"The label gives us a much higher level of graphics than the earlier version," Vanden Bosch believes. "And we've been extremely impressed with the labeler, in particular its accuracy." Placement accuracy was a difficulty with a previous labeler. "Because the overwrap of the previous package was loose-fitting, the label sometimes wasn't applied properly, or was positioned toward either side of the pack."

Vanden Bosch says Heath anticipates payback on the new equipment in about three years. While he won't reveal precise numbers for the volume of bird suet packs the company makes, he does say "we produce more than three million annually."

When asked about the financial justification for purchasing the new and refurbished equipment, Vanden Bosch says "we looked at the total picture. We realized we needed more capacity even if we would have kept the old package. In that case, we likely would have [added similar] equipment that we had been using, and we would have had to replace our old overwrap machine."

Besides looking for faster, more efficient equipment, he says, "We also wanted to reduce our labor costs." The company has accomplished those goals. Vanden Bosch says the new equipment increases Heath's capacity to package the bird suet packs by 50%. He also estimates that labor costs are down approximately 25%. Much of that savings stems from less handling and machine downtime.

"In the past, we had to manually bring trays from the forming machine to the filler," he explains. "Once they were filled, they exited uncovered on a conveyor. The hot-filled tray would exit the machine and push the one in front of it on the conveyor into a cooler for about ten minutes to help the product 'set up.' We had some spillage from that." Now trays are brought to a cooler after they're filled and sealed, so spillage isn't a concern.

While the equipment changes have provided significant gains, Vanden Bosch contends, "The main reason we made the change was that we wanted to have the best-looking package on the market. We didn't want a crinkled overwrap and label. With the new package we've gained shelf presence. And as it stands now, we believe we're the only ones with a peelable film structure [for a bird suet pack]."

How has the product "flown" at retail? Vanden Bosch says it's still premature to determine specific sales figures. "We distribute the bird suet cakes nationwide," he says. "Right now we have about fourteen different blends in the new package, with almost all of them in a twelve-ounce size. [A few are 11 oz]. The product was first on the market last June." Suggested retail prices range from $1.39 to $2.

"We've had people tell us the new package is awesome," he says. "This business is driven by the weather, and we had a very warm fall, which is bad for bird suet cakes. But in comparing monthly sales to those of previous years, we've seen a very positive response." Vanden Bosch believes the new package is also helping Heath gain repeat business, something its previous pack apparently did not do. "We have every indication," he notes, "that people are now coming back [to the store] and looking for our product. Before, they wouldn't."