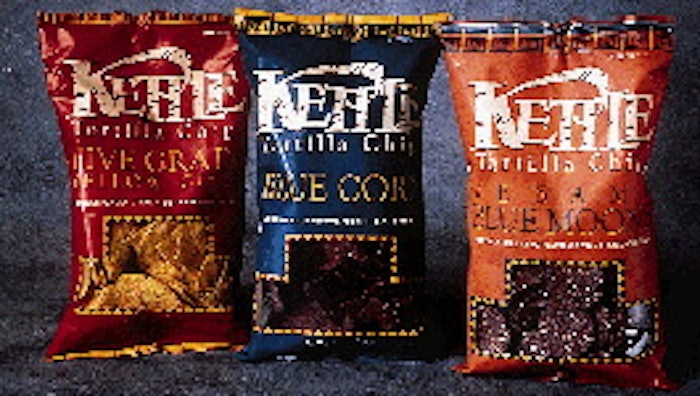 Three of the eight awards went to bags for foods. One economically protects bone-in meat products, another holds respiring cheese, while a third prevents bursting as tortilla chips are shipped at high altitudes. (For details on additional winners, see stories on p. 42 and p. 62.)

Bone-in meat cuts that are vacuum-packaged in pre-made bags often require some protection where the bone meets the film so that abrasion won't cause leakers. That suggests two possible solutions: Make the bag with film so thick and tough that the bones can't penetrate it, or use a thinner web and augment it with "patch" material, such as bone guard cloth, in the specific locations where bone meets film.

Both solutions have their drawbacks. A heavy film all around the meat is costly overkill where no bone touches the film. As for the patch approach, there's little to keep the patch from slipping out of position. If that happens, the patch is useless and a leaker is likely.

Overcoming these problems is the Rotated Patch TBG (Total Bone Guard) Bag (1) from Cryovac Div., Sealed Air Corp. (Duncan, SC). The clear patch is laminated to the outside of the clear bag. Specific information about the multilayer barrier bag material, what the multilayer shrinkable patch is made of, or when or how it's applied is not available from Cryovac.

Customers who use the FPA-award-winning bag are nearly as reticent as Cryovac. "It reduces leakers compared to what we had before," says Rodney Orell, executive vice president at Smithfield Foods in Smithfield, VA. "That means less rework and reduced costs." Smithfield uses the pre-made Cryovac bags for rib and shoulder cuts of pork sold in the refrigerated supermarket meat case. These cuts weigh anywhere from 5 to 10 lb each.

According to Cryovac, the technical achievement behind the bag is the ability to put the patch material on the two sides of the bag without covering the middle. "Technology has existed to put a bone guard patch on the front and/or back, and even to extend the patch over the front and back edges," says Cryovac's Jim Mize. "But until now it was not possible to cover each side of the bag without covering the middle." In placing the patch material where it does, Cryovac has "rotated" the patch from its more conventional position, which is why the company calls its bag a "rotated patch" TBG bag.

After the meat is loaded, the bags are vacuum-sealed on rotary chamber systems commonly used in the meat industry.

A high-shrink barrier bag for cheeses (2) that give off gas after they've been vacuum-packaged won FPA honors for Viskase Corp. (Chicago, IL).

Among the first to use the Clear-Tite®16 material is Brewster Dairy of Brewster, OH. Pre-made bags from Viskase are loaded with 8-lb pieces of cheese, vacuum packaged and then sent through a hot water tunnel that shrinks the film tight for good appearance.

According to Brewster purchasing manager Paul Snyder, the film's ability to allow carbon dioxide out while keeping oxygen from entering is just one of its features.

"The real trick is getting the film to shrink down nice and tight without shrinking down into the holes in the Swiss cheese and breaking," says Snyder.

With previous high-shrink films, Brewster would keep the shrink tunnel temperatures no higher than 165°F to prevent film breakage over the holes in the cheese. But it also meant the finished product was a piece of cheese whose film wrapping was neither as tight nor attractive as it should be.

With the Viskase material, in use at Brewster since May 1998, shrink tunnel temperatures can be kept at 195°F without worry that the film will break as it is drawn down into the holes in the cheese. The higher shrink-tunnel temperature produces a wrinkle-free and far more appealing package, says Snyder.

Viskase prints rolls of the Clear-Tite material, as well. For Brewster, the 2.25-mil film is printed flexographically in six colors. Viskase then fabricates the film into bags and ships them to Brewster.

"The distances we cover make the reliability of the flexible packaging material all the more important," says Jolynn Baker, manager of customer service at Brewster. The company distributes its product in Texas, Florida, New York and just about everywhere in between.

Shipping distances were also a concern for tortilla chip bags (3) sold by Kettle Foods, a Salem, OR-based maker of potato and tortilla chips. Kettle sought to make numerous improvements in the bag it used for its tortilla chips that are sold nationwide. Those improvements helped earn an FPA award.

Kettle wanted a window in the bag to allow consumers to see the snacks, but it couldn't achieve this with the structure it had used. Both the potato and tortilla chips were packaged in an extrusion-lamination including paper, low-density polyethylene, metallized polyester and DuPont's (Wilmington, DE) Surlyn®.

In searching for a structure that would permit a window, Kettle considered a polypropylene/PP structure, but decided against it, afraid that seals wouldn't hold when products were shipped at high altitudes, over mountains. "We also needed improved clarity, stiffness and barrier characteristics, as well as a film that wouldn't wrinkle," relates Kettle's vice president of sales and marketing Jerry Siner. In short, he says, "We just wanted everything."

Siner says the new and improved structure has allowed for a window in the package while maintaining the necessary barrier properties of the previous structure. The new structure includes 1.38-mil oriented PP laminated to a 1.5-mil, five-layer coextrusion that includes ethylene vinyl alcohol, LDPE and a metallocene-based medium-density PE. A layer of LDPE serves as the laminant during conversion by Printpack (Atlanta, GA). Printpack flexographically surface prints the outer OPP layer in six colors with "matte" inks, creating the paper-like, matte finish.

According to Kettle, the EVOH provides a good oxygen barrier and actually increases product shelf life to five months, about six weeks longer than the previous structure. The metallocene-based PE enhances seal strength to help it withstand high-altitude shipments.

The structure permits the clear window in the front of the bag that Kettle wanted. The MDPE in the coextruded layer of the film helps prevent the chips from scratching the window, according to Siner. Printpack sends rollstock to Kettle for packaging on vertical form/fill/seal equipment.

Since changing the bag structure, Siner says, "We've got better seal integrity, less wrinkling and therefore a bag that [better reflects] the product's quality. We can pack the product in an outer shipping case, and when the bags are removed, they look like they just came off the [filling] machine."

These advantages help offset the higher cost for the new film, says Siner, who wouldn't compare the packaging costs.

Kettle's tortilla chips are sold in specialty, natural food and grocery stores. There are four varieties of chips sold in an 8-oz size, with one flavor available in a 15-oz pack. Prices range from $2.39 to $2.89.

The improved bag structure has flown well with consumers. Siner says that sales have increased 30% since the change.