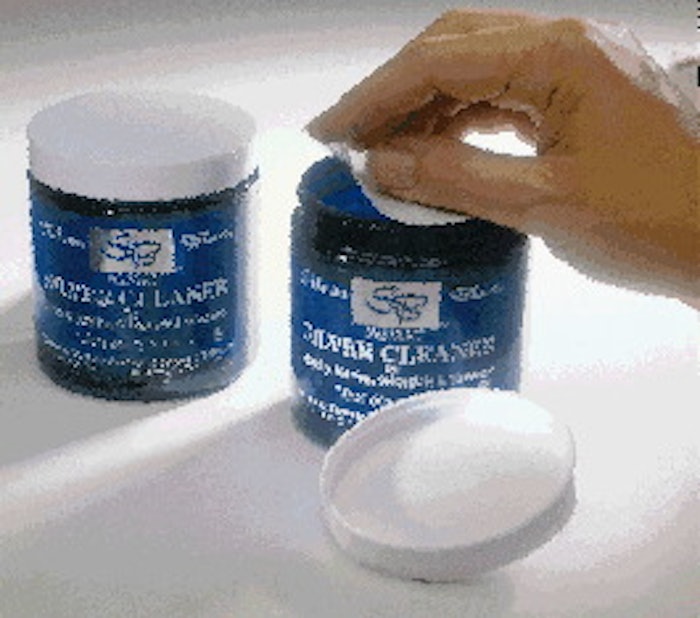 Consumers can easily tear off Silver Blue?s induction seal and throw it away. A foam liner inside the closure further protects t

It took 20 years for Winfield Brooks, a manufacturer of industrial products and commercial cleaners, to redesign its Silver Blue silver cleaner package. The company definitely made up for lost time.

The total renovation includes a new container material, sealing method, label and graphics, even a new size. The only component that didn't change is the product inside.

"This was not just converting or extrapolating the old package to the new package," says Brian Strawbridge, marketing director at the Woburn, MA-based company. "Everything was done over."

The previous package desperately needed an update. The closure leaked, the polystyrene jar often broke during shipping and the 16-oz size was not in demand-most people were buying 7- and 8-oz sizes of competing products. Plus, the white copy screen-printed directly onto the clear jar was dull and ordinary.

Despite a foam liner inside the previous screw-on polypropylene closure, the cleaner still leaked out. For many years, Winfield Brooks used temporary remedies to solve the problem. But the closure still leaked sporadically, so Strawbridge decided to investigate induction sealing.

While shopping for an induction sealing machine, Strawbridge initially ruled out lower-end, hand-held devices over questions of sealing accuracy. However, the Model ML0045 Auto Jr. from Enercon (Menomonee Falls, WI) seemed to be designed to ensure uniform sealing accuracy. Instead of relying on an operator's judgment to accurately place a hand-held device directly over the jar, this machine has a track, so the operator puts the jar in the right place every time. "Everything's perfect," says Strawbridge. "It's the first one of its type that I'm aware of." In fact, Winfield Brooks is just the second company in the country to buy this model, according to Strawbridge.

And the seal? Strawbridge says the leakers have been eliminated. The injection-molded PP closure from Phoenix Closures (Naperville, IL) comes to Winfield Brooks with an induction-seal liner from Selig Sealing Products (Forest, IL). The liner is a combination of Selig's S70 polyolefin foam backing and the company's FoilSeal-327 foil/heat-sealable inner seal material. The cap is applied and torqued down manually. An operator then places the jar in the induction sealer's track, which triggers a sensor to start the induction sealing process. Once sealed, an operator retorques the cap with a hand-held capper.

The consumer can easily tear off the induction-sealed liner and throw it away. A secondary foam liner remains inside the closure to form a good seal, helping to ensure the product won't leak out.

o/ooand in with the blue

An effective seal is futile if the PS jar breaks during shipping. In the past, "Jewelry stores would receive their shipments with the jar broken," Strawbridge says. "And even worse, UPS would have a problem, and [the leaking cleaner] would ruin other packages."

Looking for a stronger resin and a more attractive jar, Strawbridge found a sapphire blue, stretch/blow molded, polyethylene terephthalate container with a 70-mm finish from Clearplass Containers (Penn Yan, NY). And in response to consumer demand, Silver Blue changed from a 16-oz to an 8-oz size. The retail price changed from $6 to $3.95 for the smaller size.

With the closure and jar problems solved, Strawbridge set about finding a label that appeared more sophisticated than the previous look. Screen Print Dow's (Wilmington, MA) label seemed the "clear" choice: a pressure-sensitive, one-piece, 2-mil clear PP label that wraps completely around the jar, achieving the popular "no-label look." The opaque white type, printed via rotary screen by Dow, stands out dramatically from the deep blue jar. Strawbridge at first considered flexo printing, but the type ended up looking too gray. All the graphics and copy were redesigned for the new package, including a newly trademarked logo that is silver hot-stamped by Dow.

With a new label, Winfield Brooks required a new labeler. Strawbridge says the search for a labeling machine proved most difficult of all because of the full spectrum of other containers the company needed to label-from bottles holding 4 oz to gallon containers requiring front and back labels. Previously, all containers were screen-printed by outside sources. Jim Wesley, president of Labelette Co. (Forest Park, IL), created what Strawbridge says is the first machine of its kind in the country that accommodates all the container sizes with minimal changeover time, depending on the container's shape. For example, for a simple size change with a round container, changeover is less than 5 min because no change parts are needed, Strawbridge says. But some fixtures are needed to go from a round container to an oval bottle, which takes about 15 to 30 min.

Labeling is done two to three weeks prior to production. To apply the one-piece, full-wrap label, the operators lay the filled and capped container on a rotating cradle, and the container begins to spin.

The spinning triggers the label feeding mechanism to advance the clear label. As the container is rotating, it picks up the p-s label, which wraps around the container. "We do a nice, tight job with no bubbles," Wesley says. After the jar is labeled, it goes down a chute and into an accumulating box. The machine operates at speeds to 25/min and 12ꯠ/day.

The smaller-sized jar also required a new dip tray for the jewelry cleaner. Consumers place their jewelry on the sieve-like tray and lower it into the detergent. Strawbridge chose an injection-molded, clarified PP dip tray from Waddington Jaycare (Garwood, NJ) with a stem long enough that consumers needn't touch the detergent to access the tray.

Filling and capping are done on older equipment at Winfield Brooks' Woburn, MA, plant. However, Strawbridge says the company is looking into buying new filling equipment.

Since its introduction at a jewelry show in February, Silver Blue's makeover has received rave reviews. "People love it. And we believe it is a very nice-looking package," Strawbridge says. "We wanted this product to look elegant, yet serious. That was the goal. It's a serious product for people who own serious jewelry."

In early October, Winfield Brooks introduced a new gold and platinum cleaner in an amber jar with a gold, hot-stamped logo on the label.

Strawbridge says this complete makeover relied on good design as much as good machinery. "This was not only a process of redesigning a package, but of trying to find the best equipment that would satisfy our needs," he says. "And that was just as much, if not more so, of the project than just coming up with a new design."