Jar line is a royal flush

David Newcorn
Oct 31, 1998
Arotating plate ?broadcasts? or spreads yeast into a bisected funnel (above, inset) that channels the flow of yeast into two ja

A new nitrogen-flush jar filling line is churning out 4-oz jars of yeast at speeds up to 80/min with headspace oxygen levels consistently under 1% at Universal Foods' Red Star Yeast Div., Milwaukee, WI.

The popularity of home bread machines in recent years has meant that consumers are buying more yeast and in bigger quantities than ever before. While Red Star continues to offer its venerable 7-g foil packets, it needed to upgrade its aging jar line to keep up with surging demand for the larger sizes.

Aside from a slow 16 jar/min output, the old line relied on an imperfect vacuum-flushing system that removed oxygen inconsistently, resulting in residual oxygen headspace levels of 3.5%. Like beer, the shelf life of yeast depends on protection from oxygen, moisture, heat and light. Also like many beer manufacturers, Universal uses amber glass jars for packaging its product.

The new system, running for about a year, is fast enough to keep up with demand for the 4-oz jar without even coming close to its capacity, according to Bob LaJoice, packaging engineer. It runs a single shift, three days per week; the old line often spilled over into expensive second shifts.

Even better, the new line has allowed the company to bring in-house the packing of its 7-oz jars that it had been contracting out. This reduced packaging costs by 90% for this size.

The heart of the new system is a two-head, in-line auger filler from Spee-Dee Packaging Machinery (Sturtevant, WI). LaJoice claims that of several models of fillers he tested, Spee-Dee was the only one that could consistently hit the 75 jar/min target he set. That's due, says LaJoice, to advanced timing techniques accomplished by Spee-Dee's PC-based control.

"They had a concept of timing where they would trigger the fill in advance of the bottle being there," LaJoice explains. "So as the jar is coming down the line, it just happens to be right under the nozzle as the yeast drops into the jar. You pick up some seconds on each cycle. And when you're filling two bottles at a time, it is possible to do the seventy-five to eighty bottles a minute with an in-line filler."

Spee-Dee estimates its proprietary PC-based controls allow the system to gain an extra 15% in speed. The speed capability didn't carry a premium cost compared to the other machines LaJoice had been considering. In fact, says LaJoice, "Spee-Dee had the best price."

The other crucial component to the success of this packaging line is the nitrogen-flushing system, supplied by Rayfield & Associates (Perrysburg, OH). That vendor started by building a Lexan enclosure over the Spee-Dee filler as well as adjacent capper. However, the enclosure is not hermetically sealed; rather, nitrogen is pumped continuously into the enclosure, causing a continuous overpressure that keeps ambient air from leaking back in.

Because nitrogen is somewhat lighter than oxygen, careful thought needed to be given to the method used to pump nitrogen into the jars to displace the oxygen. The solution turned out to be a long tube running the length of the enclosure, suspended about 5" over the jars as they travel down the conveyor. The bottom of the tube is perforated with 1/16" orifices spaced about an inch apart. The N2 is pumped out through these holes and down into the jars.

The nitrogen-flushing system, then, does two things. "The constant blasting of nitrogen directs the force down into the jar to really give a concentrated purge of the head space air," says LaJoice. "But also at the same time it's maintaining the atmosphere inside that enclosure to an oxygen level of one percent or lower."

Operators know at any given time what the percentage of oxygen is in the enclosure that spans the filler and capper due to the digital readout of an oxygen analysis system from Servomex (Norwood, MA). Universal has programmed the line to shut down if the analyzer measures an oxygen content in the enclosure that exceeds 1%. At the time of Packaging World's visit, it was holding steady at 0.7%.

"Of course our ultimate concern is the oxygen in the jar," says LaJoice. "However, when that system is running, we are assured that our jar levels are okay."

LaJoice says it took a lot of work to get all the factors right to achieve such a strict tolerance. Universal worked closely with Rayfield to adjust the orifice sizes, the configuration of regulators, distance from the manifold to the jars, the number of N2 distribution lines, etc. "They did everything possible and went beyond what one would expect to make this thing work," says LaJoice. "I've never seen anybody so conscientious."

While LaJoice says the shelf life has improved, the jars are still code-dated for a one-year shelf life under refrigeration.

The line starts out as workers unpack jars from reshippers and place them onto a rotary accumulator/feeder at the start of the line. Once jars are picked off by the conveyor, they immediately enter the enclosure of the auger filler.

Meanwhile, dry yeast is pneumatically conveyed from a bulk bag to an overhead hopper above the auger filler. For each fill cycle, the auger rotates a few turns, transferring product through the auger tube. The dry yeast, which resembles fine grains of sand, then drops onto a rotating plate. The rotating plate "broadcasts" or hurls the grains of yeast outward, over the edge of the plate and into a feed funnel underneath. The funnel is bisected by a divider that splits the flow of yeast in half. Two discharge ports, one for each side, channel the product into two jars.

For the 4-oz jars, Universal aims for a target weight of 114 g and finds that fill accuracy is ±1%.

At the top of the feed funnel, fines and dust are removed by a continuous vacuum. That prevents jars from becoming dusty in the filler.

After filling, jars are conveyed into the capper, which LaJoice describes as a standard screw-on capper. The only difference is that it, too, is enclosed inside the nitrogen-flushing enclosure.

Capped jars exit the enclosure and convey downstream for shrink banding, labeling and drop-packing back into the reshippers (see sidebars).

Changeover wasn't much of an issue since the 4-oz jars constitute the bulk of the line's production. When the 7-oz jars are run, typically for one week every three or four months, changeover is easy since both jar sizes share the same diameter. LaJoice estimates changeover for the whole line takes only two hours.

In the end, the filling system has enabled Universal to keep up with consumers' desire to buy yeast in larger quantities. "This line just seemed to have an electronic sophistication beyond the others," concludes LaJoice. "We sent product to them for testing and it was clear that Spee-Dee just seemed to have it." 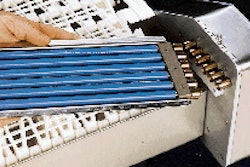 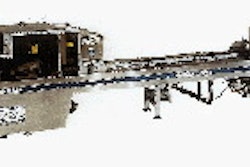