Packaging machinery spending by U.S. manufacturers this year will likely rise by up to 3% more than it did in 1997. Strong investment is expected from personal care and household/industrial chemical markets. 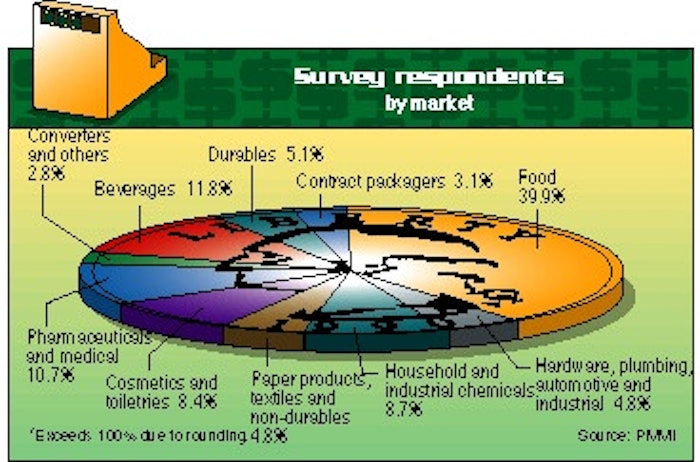 Seven out of 10 manufacturers/packagers plan to spend as much or more this year on packaging machinery as they did in 1997. However, declining spending by the other 30% of manufacturers will offset those gains to the point where domestic equipment outlays will rise between 1% and 3%.

This study's principal objectives were to: (1) assess the outlook for packaging machinery spending in 1998 by packagers in the U.S. domestic market, (2) examine factors that will influence the expected level of demand, and (3) evaluate trends affecting the market. Survey findings were based on 364 telephone interviews conducted, says the association, "with decision-makers from essentially all sectors of the market."

Many of the 364 interviewees' comments represented plans for multiple locations or company-wide spending expectations. In all, PMMI says, the information from these respondents represented data relative to 1극 plants. That sample was selected to approximate all principal market segments where packaging machinery is sold, according to PMMI. Telephone and mail interviews were conducted between December '97 and March '98.

"This is the first year we have done this in-depth purchasing research," notes PMMI president Charles D. Yuska. "Our research indicates continued growth and investment in packaging machinery as companies look for ways to increase productivity while controlling costs."

Of the 364 respondents, 37.4% expect to spend the same amount for equipment this year as last, while one in three (33.7%) plans to increase machinery expenditures in '98. Less spending was anticipated by 28.9% of respondents.

Nearly four in 10 respondents were from a category described as "Food and Food Preparations." Beverages (11.8%) and Pharmaceuticals and Medical (10.7%) represented the next largest groups of respondents (see Figure A).

"Although the findings clearly revealed pockets of strong growth in machinery demand, they also uncovered elements of both declining demand and a leveling off in the rate of machinery acquisitions. The net result suggests that compared with last year, the 1998 market will continue to grow, but at clearly a less robust pace," says the report.

The personal care market is expected to provide the strongest spending this year. Manufacturers predicted outlays in the range of 7% to 12%. Household and industrial chemical producers planned increases of 5% to 10%, followed by makers of hardware, industrial and automotive components, at 5%.

Beverage packers, however, plan to cut spending for packaging equipment between 4% and 9% compared to '97. PMMI says this segment is typically responsible for about 14% of annual machinery shipments. Pharmaceutical makers expect investment at last year's levels, "but with an upward bias," says PMMI. It reports that the pharmaceutical/medical manufacturers spent heavily last year in anticipation of higher '98 production requirements.

When asked for its goals in ordering packaging machinery this year, respondents most often cited the need to expand production/packaging capacity (31.4%). Another 16.7% needed to replace older machinery to boost efficiency; 9.1% said the lifecycle of existing machinery necessitated immediate replacement; and 8.5% expected to reduce labor costs through equipment purchases.

Of those respondents not planning to buy new machinery in 1998, an overwhelming 65.5% cited purchases made last year as the primary reason. That response was followed by the inability to justify a return on investment (9.2%), concentrating expenditures on non-packaging equipment (7.6%), and the lifecycle of current equipment does not yet call for replacement (6.7%).

What will they buy?

Manufacturers were also asked what equipment they planned to buy. Their responses varied by machine type (see Figure B).

As the illustration points out, conveying and feeding equipment was on the shopping list of most respondents planning to buy new machinery in '98 (73.3%). Next up was coding/printing equipment (68.7%), followed by labeling machinery (55.2%).

PMMI's survey also asked if machines would be purchased as new additions, or as replacements for existing equipment.

Machinery most in demand as a plant or line addition included shrink film applicators/heat sealers (61%) and palletizers/unitizers (60%). Cappers (39%) and liquid fillers (38%) were rated the highest among respondents planning on replacing those machines this year.

When it came to decisions on buying new or used machinery, manufacturers voted heavily in favor of the former. Depending on the particular machine, new equipment-only orders ranged from a low of 72% for bottling line machinery, to 96% for inspection/detection equipment. Used machinery purchases fared the best in horizontal wrappers (9%) and conveyors/feeders (8%).

The report says that more than 36% of packagers order machinery exclusively or in part due to recent equipment advances or new features (see Figure C). Nearly one in four (23%) identified machinery that could be changed over without tools as the key buying influence.

Machinery buying decisions are also influenced by packaging materials, container shapes, design and innovation. According to the study, 28.5% based orders on these factors. Of these, 20.8% invested in equipment because of new bottle shapes and sizes, 13% to accommodate new plastic films, 10.4% for stand-up pouches. Other materials expected to lead to machine purchases include, in order of response: clear labels, plastic bottles, freshness films, pouch and cap closures, lighter corrugated and multiwall improvements.

When asked what factors could occur this year that could alter their 1998 machinery plans, respondents' answers weren't surprising. On the positive side, they said increased sales ranked first, with 18.4%. New product introductions (10.5%) and marketing issues (6.6%) followed. Declining sales would negatively alter purchasing, according to 15.1% of the study respondents. The economy (8.6%) and buyout/merger activity (7.2%) were mentioned as leading reasons for not purchasing packaging machinery.

Breaking down the responses into individual markets, the analysis begins with the outlook for the food segment. "In spite of the nearly frenetic wave of consolidations that has engulfed the industry in recent years," says the analysis, "the population of food plants in the U.S. remains large." Food packagers are primarily looking to buy conveying equipment (68%), inspectors/detectors (66%) and coders/printers (63%).

For beverage packers who plan to buy equipment this year, most cited bottling line and coding/printing machinery (each 79%), conveyors (76%) and cappers (71%). This segment's expected 4%-to-9% decrease in spending is due to heavy equipment spending last year, concentrating on non-packaging machines, and business consolidation. But several promising developments bode well for the beverage segment's future, says PMMI.

These include strong growth in domestic bottled water sales, the introduction of new shapes and sizes of bottles, particularly single-serve and high-energy caffeinated drinks.

The household and industrial chemical products segment looks strong, resulting from "the general good health of the U.S. economy." These manufacturers often plan to boost efficiency and productivity. Of those firms planning to add packaging machinery this year, conveyors (73%) and coders/printers (70%) were the top two areas targeted.

Conveying also led the list of expected machine purchases in the pharmaceutical/medical segment (74%), along with coders/printers (74%) and cartoners (66%). This segment's "potential as a growing source of future demand will likely elevate its significance in the years to come," says the study.

It adds that several important trends will contribute to the dynamics of the market's prospects. The growing elderly population will increase not only the number of units sold, but also affect labeling requirements and the need for senior-friendly closures.

In personal care products, the study notes that makers need to expand production, and packaging capacity is driving strong machine purchase expectations for '98. Topping the list of likely purchases are conveyors and coders (both at 79%). Capping (76%) and liquid fillers (72%) also are in widespread demand.

The 1998 PMMI Customer Purchasing Plans Study is free to PMMI members; $495 for non-members.