Nestled along the Columbia River in British Columbia, Canada, the resort town of Invermere relies mainly on the summer tourist season for income. Many of the tourists hail from Calgary, 300 miles away, so the economy of Invermere depends considerably on that of Calgary.

But one Invermere business, Quality Bakery, is using an unusual packaging technology to become less dependent on the local economy. Essentially a method of pasteurizing bread in its package, it offers a shelf life at ambient temperatures of up to six months. That means Quality can reach markets far removed from Invermere or Calgary.

"With an item I can sell outside of this local area, I distribute my risk and establish a better economic picture for the bakery," says Peter Banga, owner of the 40-year-old bakery.

Although the bakery produces more than 40 kinds of bread, the one Banga had in mind for extended shelf life was a wheat-free bread that would interest health food stores, specialty grocers and bakeries. Sunflower Rye Bread, as it would be called, would meet the rising demand of health food fans, as well as those on restricted diets. After considerable time in the kitchen, Banga developed a product he felt worthy of marketing. Unfortunately, without an extended shelf life, Banga's new marketing scheme was only half-baked.

So he investigated in-bag pasteurization, a method used commonly in Europe that offers a shelf life of 40 to 60 days. According to Banga, it's a matter of baking, cooling, slicing and packaging the bread into a polypropylene bag. After it's packaged and the bread is closed with a twist-tie, the bread is placed in a pasteurizing oven, which is set at 75°C. This oven heats slowly, says Banga. It's kept at that temperature for 30 minutes and then the oven is turned off. Bread is left inside for six to eight hours. This kills spores that would later cause the bread to mold, he says.

Using this method, Banga achieved a shelf life of 40 to 60 days on much of his bread, but too many loaves didn't make it that long and were lost to spoilage. One of the reasons was the twist-tie, which allowed oxygen to enter the package. Heat sealing would have been more secure, but there was a strong chance that the PP bag would tear during the sealing process.

Banga also realized that even when there were no problems with oxygen getting through the twist-tie closure, the PP bag couldn't deliver more than a 60-day shelf life. That was simply not long enough for him to reach all the markets he had in mind. And finally, he wanted his bread to have a better visual appeal-something more innovative and eye-catching than the typical squared-off loaf.

After some experimentation, he heard of a bag that might be suitable for his needs. Manufactured in Korea and handled in North America by Flair Flexible Packaging (Calgary, Alberta, Canada), the bag is formed from a 100-micron (4-mil) lamination of polyester/low-density polyethylene/linear low-density polyethylene.

Unlike bread bags that are typically closed with a twist-tie, this bag can be closed by means of heat sealing, a better method of keeping oxygen out. Also, the polyester layer in the premade bag offers a better moisture barrier and doesn't tear as easily as the PP bag.

The bag is unusual in its use of a fin seal located at a corner instead of down the middle. This permits full graphic panels on both the front and back, which in this case are gravure-printed in seven colors. Quality chose to keep front and back graphics identical, save for the text, which appears in English on the front and French on the back. The image itself, depicting slices of Sunflower Rye Bread, was designed by Pencil Works (Calgary, Alberta, Canada).

Other unique features of the bag are gusseted sides and corners that are pinched and heat-sealed. This creates a clearly rectangular package, as opposed to the tubular look of most fin-seal packages. After printing, the converter also applies the two-sided pressure-sensitive tape that lets consumers reclose the bag.

According to Banga, Flair's bag costs less than the bag he used formerly. "The polypropylene bag is hard to source in North America," he says. "I'd have to get it out of Europe. In this case, I get a much better bag for probably the same or less. If I consider freight and handling, I got it for less."

The bags are first loaded into a vertical hopper of the PLC-driven HBSA horizontal bagging system from Package Automation (Spruce Grove, Alberta, Canada). The system uses a vacuum cup assembly to individually move the bags from a storage compartment to the filling area. At the filling area, an overhead set of vacuum cups descends and opens the bag for filling.

Meanwhile, bread is baked and sliced on an automatic slicer. The loaves measure 48" long, yet only about 10 slices, or 450 g of bread, are placed into each bag. Because automated equipment would likely damage the slices in separating them from the loaf, Banga decided to use semi-automatic machinery. Slices are picked up by an operator and placed on the system's "pusher mechanism."

As the product is pushed into the bag, the bottom automatically folds, forming the stand-up bottom. Preseal arms fold the bag top and side gussets to avoid accidental mangling as the package enters the sealing station.

Sealing is the key to the longer shelf life, says Banga. "Before, we just closed it with a twist-tie," he says. "Now we heat-seal using a quarter-inch seal that's extemely good. We have no leakage with the new bag."

Quality uses an Emplex (Scarborough, Ontario, Canada) 3CLA sealer, purchased through Package Automation as part of their integrated system. The entire system fills up to 10 bags/min, depending on operator speeds.

Now, says Banga, a six-month shelf life is possible. He admits that he prefers to keep turnover at a higher rate, but states that it offers enough of a shelf life so that a supplier or distributor can warehouse and resell it without encountering the problem of spoilage.

Currently, expiration dates, in the form of pressure-sensitive labels, are applied with a hand-held gun.

Quality has already expanded sales into the neighboring province of Alberta. "My next step will be to expand into the U.S. markets," says Banga, "into the border states like Montana and Idaho.

"It's only been out two months and already I've felt an increase just due to the bag alone," he continues. "People look at the bag and pick it up much easier than they had before. It's quite nice to to see the positive response to the packaging." He admits it's difficult to quantify accurately, but says that sales in Calgary have probably doubled since the bag's introduction. 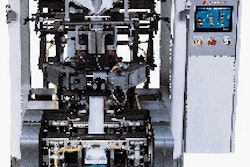 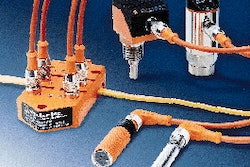 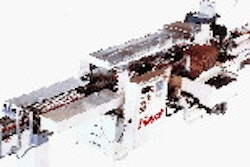