P-s label press mixes it up

Amway has been using the narrow-web press since March '97 to print p-s labels for bottles of laundry products, kitchen cleaners and car care products.

By David Newcorn
Amway bought an unusual press to produce high-quality p-s labels, such as for these laundry products

Labels are applied to plastic containers in three sizes, mostly 1-L plus some 500-mL and 5-L containers. Why the unusual combination of print processes? "The flexo gives a more vibrant background color," says narrow-web team member Joyce Wallace. "It permits a heavier ink laydown." For example, consider the labels for Amway's laundry products (shown below), which were being printed during Packaging World's Amway visit. On these labels, the bright, colorful photos of clothing are first process-printed via offset, leaving a blank space where the blue square background that contains the product name will be printed. The flexo station then lays down the blue in register to the offset-printed portion of the label. The second flexo station applies a clear gloss coating over the entire label. One of the primary benefits of the new press is shorter lead times for orders, from 12 weeks down to two. Previously, the labels were printed by outside vendors, primarily via letterpress, but also flexo. By bringing the work in-house, Amway estimates that it saves about $7 per 1ꯠ labels. ROI is 1.5 yrs. Amway wouldn't disclose annual cost savings. Though the press permits web widths of up to 13", Amway typically uses 103/4"W webs of paper, which arrive in 40" OD rolls. According to Amway, there's nothing especially unique about the paper label stock, which comes from several suppliers. Labels are typically printed two-up. Automatic lifts on the press move the heavy rolls into place without operator straining. Although offset printing is known as a high-speed process, the press speeds on the Nilpeter are limited by the flexo stations. Wallace says Amway has run the press as fast as 400'/min, but typical operating speeds are closer to 220'/min. Each of the seven stations on the press houses a cassette. The order and function of the cassettes-whether they're flexo or offset-can be mixed or matched as the job requires. (The press can even take screen-printing cassettes, a feature that Amway hasn't yet used.) "For example, you can have offset, flexo and another offset; or offset, screen, flexo and so forth," says Wallace. Typically, Amway positions the four offset cassettes first, followed by the two flexo cassettes. The offset cassettes require dedicated water and other connections, so in actual practice they're usually not moved. Amway's commonly used cassettes have a 20" repeat. "If we need a different repeat length, we can use a different cassette size," says Wallace. As the web unwinds, it passes through the first offset station, which consists of a plate cylinder and a blanket cylinder that actually touches the substrate. Immediately after each station is a set of UV lights that cure the ink. The web passes through three more offset stations, followed by the two flexo stations. One flexo station applies the background color while the other applies the clear UV top coating. The web then passes through a BST Pro Mark (Elmhurst, IL) web inspection system that's used to monitor registration accuracy. Finally, the web enters a rotary die-cutting station. Highly precise cutting dies cut through the label substrate but stop short of cutting the carrier liner. Trim scrap from the p-s substrate-which Amway calls the matrix-is not rewound, but instead is continuously crumpled and carried by a conveyor into a trash bin. This allows continuous printing; the press doesn't have to be stopped to remove waste trim. Labels are rewound onto a finish roll for slitting on a separate machine. Press changeover takes about one hour for a two-color job, and three hours for a five-color job. One of the most important benefits of the press is print quality. "Quality was definitely our main concern," says Wallace. "We looked at a lot of presses. We started out looking for flexo because that was what we were familiar with from the Arpeco [see story, p. 34]. We did several tests on narrow-web flexo machines and we just weren't satisfied with the quality. "Then this Nilpeter press came along, we heard about it, tested it, and were very pleased with the results," Wallace says. "I think the narrow web with offset is a real plus. It's done everything we hoped it would." 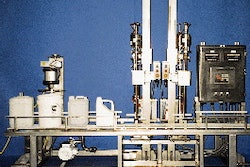 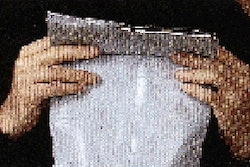 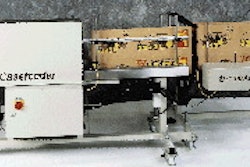