"When you're a farmer, you always try to fix what's broken with what you have at hand." This is Tom Gilson's credo as a lifelong dairy farmer. This same philosophy was applied to the water packaging line. When Packaging World first contacted him, Gilson was in the middle of "bending" conveyor guide rails around a tank to simplify installation and eliminate costly visits by the manufacturer. Later, we discovered he handled the installation of all the equipment in the line, and that he helped make sure all the equipment worked well with other machines. And that's how Ledge Rock Springs also handled change parts, feeders and the changing elevation of equipment for the line. For change parts and the feeders to the unscrambler and capper, Tom Gilson first sought the quotations from the OEMs. He bought the first sets of change parts from Change Parts, Inc. (Luddington, MI), but then decided to have subsequent sets of parts fabricated locally. The same was true for the feeder conveyors to the unscrambler and the capper. He felt the OEM quotes were too high, so he sought local fabrication of the parts. But the major change was in building pedestals to keep all the equipment working in-line with subsequent machines. In the end, Ledge Rock Springs needed 28 pedestals so that equipment purchased earlier would match the conveyor heights of the last machines purchased, including the case packer. "One of our biggest mistakes is that we didn't realize what the tail end of the line would be like," says Ted Gilson. "Originally, we had forty-six-inch legs on the labeler, and we cut them down to thirty-six inches to match the filler and capper. But when we added the drop packer, we needed to be at fifty-six inches off the floor. So we had to create a whole bunch of pedestals to get all the equipment at the right height." His brother and company president, Tom Gilson, the equipment guru, went into the dairy barn and found 9"-round polyvinyl chloride pipe that's used to blow grain for cattle feed. He cut off sections of the pipe and filled them with cement to make the concrete pedestals that now balance the height of all the equipment in the line. "Now we know what's called the 'learning curve,'" says Phillip Lewis, operations manager. "We'll know better the next time." 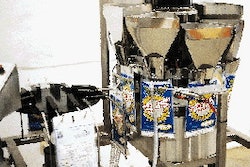 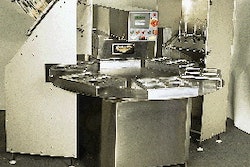 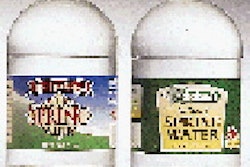