Seattle fish processor vacuum packs salmon right on board its two ships for sale to Japanese markets. Now there's no need to thaw and refreeze, so quality is improved.

Operating right on the deck of the ship in some of the most punishing conditions possible, this vacuum packaging system cranks o

Seattle-based Oceantrawl, Inc. took value-added packaging to a whole new level last summer when it installed horizontal form/fill/seal machines on two of its salmon processing ships. "There's only a handful of players in this business, and we know this has never been done before," says production manager Pat Corbett. Most of Oceantrawl's production is sold to Japanese markets. Like others in the business, Oceantrawl used to process its fish in a more traditional manner: headed, gutted and frozen in 35-lb blocks. "I traveled to Japan to conduct some market research and discovered that roughly 70% of the salmon arriving in Japan was reprocessed," says Oceantrawl vice president Ron Pauley. This involves splitting and salting each fish, vacuum packaging it, and then freezing it again for distribution and sale. Pauley figured, why not handle these steps at sea? So Oceantrawl began to research all the equipment they'd need. First there was processing gear for heading, evisceration, removal of tails and fins, splitting, and brine injection. Then there was packaging equipment. In 1995, this amounted to nothing more elaborate than a small vacuum chamber machine. It produced about 250ꯠ lb that sold so quickly, the firm knew it was time to upgrade. After yet more research, management selected for each of its two salmon processing ships a Model R530 stainless steel vacuum packaging machine from Multivac (Kansas City, MO). The machines arrived at port in Seattle in early June and were loaded on board and operating in one day. On June 15 the ships left port for Bristol Bay, Alaska. They anchored about eight miles off Naknek, where they stayed for the five-week Bristol Bay sockeye salmon run. Before it was over, they were producing about 200ꯠ lb of fish per day in each ship. And even though the machines are only used for about five weeks out of each year, Oceantrawl is plenty happy with its return on the investment. "If you net a dollar per pound more for a value-added package, it doesn't take long to pay off the investment in equipment," says Corbett. "It was pretty amazing, too. We were producing the portions four-up at about 15 cycles/min, so there were plenty of fillets shooting out of those Multivac machines." It couldn't have been a tougher environment, adds Corbett, considering that the machines were outside in the salt-sea air and surrounded constantly by the inherent messiness of a fish processing operation. "The Multivacs turned out to be real work horses," says Corbett. The packaging film used by Oceantrawl also had to be up to the challenge. "With a fish sliced down the middle, you're dealing with some razor-sharp bones," says Corbett. So the material had to be tough. But it also had to be machineable and capable of providing secure heat seals despite the moist, oily conditions. Corbett turned to Socopac (San Juan Capistrano, CA) for the film it needed. The 6-mil forming web is a five-layer coextrusion consisting of nylon/tie/nylon/tie/high-density polyethylene. According to Socopac's Bob Casola, two discrete layers of nylon rather than one heavier layer offer better thermoforming performance. He also points out that the HDPE resin supplied by Dow (Midland, MI) is produced by means of metallocene catalyst technology, which delivers greatly improved sealability. The 4-mil top layer is an adhesive lamination of biaxially oriented nylon and biaxially oriented polyester that is reverse-printed in four colors. Copy is in both English and Japanese. Secondary packaging is important, too, says Corbett. "It takes a lot of abuse, first getting loaded in our freezer, then hand stacked onto a pallet, brought out of the hold by crane, loaded onto a Japanese tramper, sent to Japan, and eventually pitched into freezer vans." To ensure that the 50-lb cases offer adequate protection throughout this rigorous distribution path, Oceantrawl specifies a double-wall C-flute construction. Supplied by Willamette Industries (Indianapolis, IN), the shippers are not only sturdy but attractive, too, thanks to a white outer liner. "We wanted to make an impression," says Corbett. Probably a good idea, considering the quality demands for which the Japanese are famous. That demand for quality is another reason why Oceantrawl gains a competitive advantage from its onboard packaging operation. "Before we started vacuum packaging, the customers in Japan would thaw, process, and refreeze the fish," says Corbett. "With our Multivac approach, the fish is only frozen once, so color, taste and texture are better." Also better as a result, says Pauley, is Oceantrawl's bottom line. 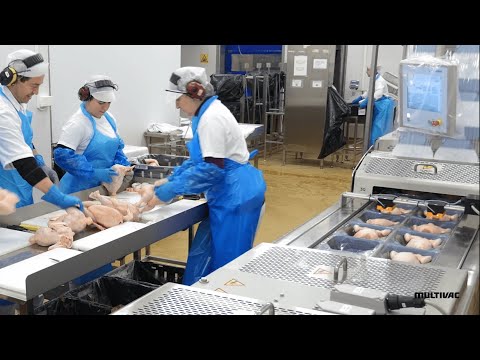 Semi-automated packaging of poultry at Nortura in Norway 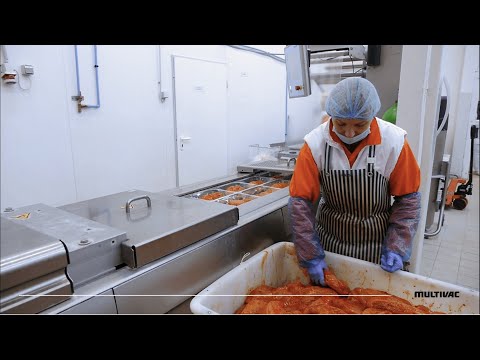 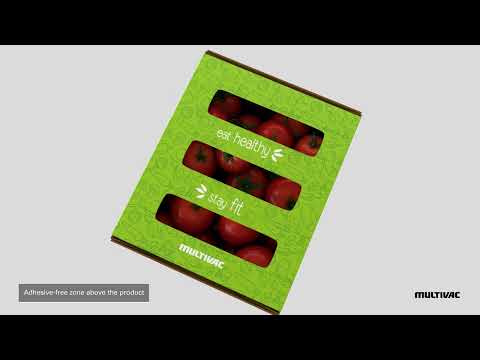 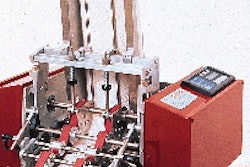 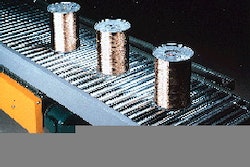