Aseptically packaged chilies allow an Australian grower and harvester to extend distribution beyond its rural location and compete in a hot global market. 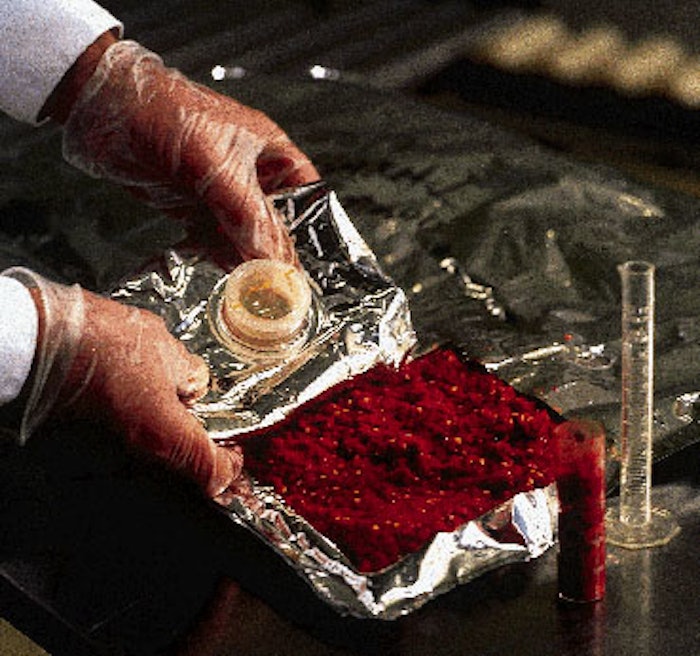 For illustrative purposes, an aseptic bag is sliced open to reveal the gland and the bottom membrane. During filling, product fl

How does a young and relatively small company in rural Australia become a major global supplier of chili products for sauce manufacturers and foodservice operators? By successfully marrying a high-quality, in-demand product with an innovative packaging system.

Since January 1997, Austchilli (Australians spell chilies as "chillis"), located in the eastern coastal town of Bundaberg, Queensland, Australia, has been growing, harvesting, processing and packaging its Cayenne chilies at about 3ꯠ tonnes (3괓 tons) of chilies per year. From the beginning, the company knew it needed an edge on the competition in order to export the pureed chilies beyond the Australian continent.

That edge came in the form of an unusual aseptic packaging process, which made Austchilli the first company in the Asia Pacific to process and pack chilies aseptically. The firm sees a number of advantages in packing aseptically in a flexible package:

* retains full flavor of the chilies without the need for preservatives or long exposure to heat in a retort, and

Austchilli chose Southcorp's (Melbourne, Australia) Intasept(TM) UHT (ultra-high temperature) technology because "Intasept suited our product," says Sally Pateman, marketing manager at Austchilli. "And Southcorp was prepared to take a few risks and do some experimentation and trials with us." Neither De Paoli nor Pateman would comment on the cost of their method of packaging compared to others that might have been chosen.

Austchilli packs its product in bags that hold 22 kg (48.5 lb), 215 kg (474 lb) or 1ꯠ kg (2견 lb). The bags are a proprietary laminated construction including high-barrier aluminum foil and polyethylene. Heat-sealed into the bag is a 32-mm-dia (1.26") linear low-density PE filling port or "gland," as Southcorp calls it. The gland features two 75-micron (3-mil) laminated barrier membranes, one completely sealing the top of the gland, and the other partially sealing the underside of the gland.

Austchilli acidifies and macerates the chilies into a puree in a large tank. From an opening in the tank, the chilies are pumped through a series of sterilizing heat exchangers from Hipex (Melbourne, Australia). The chilies flow through a double-walled tube carrying hot water at temperatures above 100C (212F). Next, they're held briefly in unheated tubes before being pumped through a section of cooling tubes.

When the correct volume of product is in the bag, the fill valve closes, and the interface area of the filler is steam-flushed to remove any residual product left in the gland area that could get moldy. At the same time, a heat-sealing pad comes up from below the partially filled bag and presses the bottom membrane against the gland, completely sealing the membrane. Because the membrane's bottom surface is polyester and the bag's inner layer is PE, those materials won't weld. So when the sealing is finished and the heat sealer retracts, the bag lifts away, as well.

An operator removes the bag from the fill valve and attaches another bag, at which time the entire process of steam sterilization begins again. Intasept bulk fillers are capable of fills to about 8ꯠ kg/hr (17깜 lb), Southcorp says.

Each 22-kg bag is manually placed in its own box supplied by Plunkett's (Bundaberg, Queensland, Australia). The box is printed in three colors and features the Austchilli logo, three long red chilies supporting a gold Austchilli banner. Also printed on the box are details of the contents, Austchilli's address and phone number, and a line reading "Product of Australia."

The 215-kg bag is placed into a metal drum before filling, while the 1ꯠ-kg bag is loaded into a reusable Pallecon IBC from TNT Container Logistics (Franklin Park, IL).

Austchilli ships its product to manufacturers such as Heinz, Kentucky Fried Chicken and Master Foods in Hong Kong, Singapore, Malaysia, the Middle East, the Philippines and New Zealand. According to Pateman, Austchilli relies on English copy for its outer carton when shipping to these countries. A different box is used for the Middle East, where there are different requirements for packaging and labeling. Those requirements are due to "religious convictions," according to the company.

Austchilli may soon be spreading itself to other markets. A recent trade show in Paris produced negotiations with a number of European countries. Pateman says Austchilli is also interested in exporting into the U.S. "We know there is huge competition there, and we're at a stage now where we're trying to get as much information as possible about the market in the United States. We are aware of the use of aseptic packaging in a few areas." She says management has begun talks with Kraft, McCormick and Kentucky Fried Chicken, but Austchilli has yet to enter the U.S. market.