Ocean Spray believes the handled bottle's chief benefit is in consumer handling. "The bails are convenient for carrying," says Ray Bourque, director, product and packaging R&D. "But you don't have the pouring control that you have with this package." Bourque says the new pack does allow single-handed pouring even with a full container. However, some consumers may still find a full gallon too heavy to lift easily with one hand.

What's unique is that the PET preform is actually blow-molded around the preformed PP handle. "It's quite a technical feat," says Bourque, "and working with Yoshino it's taken us years to perfect." He adds that Yoshino has also patented the handle design to ensure that it remains locked to the bottle during packaging, distribution and end-use, while separating easily for recyclers.

At Yoshino, on a modified injection/stretch blow-molding machine whose supplier the molder will not identify, the handles are unscrambled, oriented and positioned into the blow molding machine at the precise time that the mold halves close. Both Yoshino and Ocean Spray were reluctant to share manufacturing details.

Yoshino has commercialized such side-handle PET bottles in Japan for several years. These bottles are used for edible oil, liquor and soy sauce, according to Toshi Kojitani, the supplier's general manager. What's new about this particular application is that this is the first time the technology has been perfected with heat-set PET, according to Kojitani. Ocean Spray also points out that this is the first shelf-stable juice package with an added-on handle. Yoshino has signed a contract with Ocean Spray granting the packager exclusive use of Yoshino's patented technology for beverage containers.

Despite the mix of resin types, Bourque claims that the new package is still recyclable. "We've run significant recycling tests," he says. "A major recycler tested it and found no problems" in separating the PP handle from the PET bottle. According to Bourque, the polypropylene from the handle is separated out via the same post-grinding density/float process that recyclers use to screen out PP from caps, TE breakaway bands, etc.

Ocean Spray admits the new bottle is also more expensive than its predecessor. "It adds some cost, but we're eliminating the bail," which, Bourque says, offsets some of that additional cost. "It's still a small part of the total product/package cost."

Bourque does acknowledge "significant re-engineering costs" on the firm's packaging lines, specifically the labeler. "We now have to orient the bottle so that the label is oriented to the handle," says Bourque. Filling, capping and other packaging operations remain essentially unchanged.

The graphics on the PP-coated paper label were modified to acknowledge the side handle, featuring a bright green violator with yellow type that says "NEW Easy Pour Handle!"

Gallons retail for around $6, depending on the product, the same price as the former package. (DN) 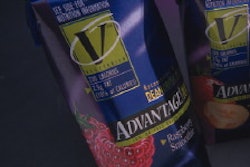 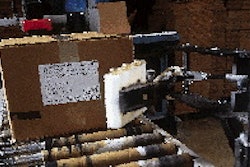 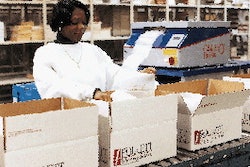