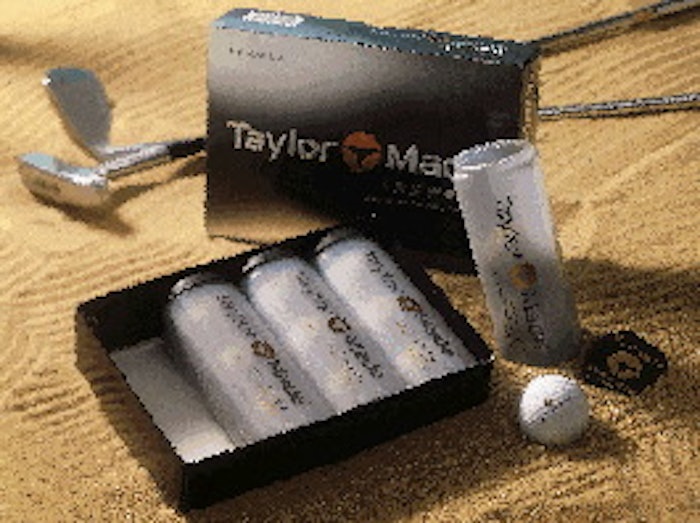 Taylor Made?s Moisture Block? sleeve is said to protect golf balls from absorbing moisture, which causes velocity loss in the b

Golf balls made with a solid core and soft cover can absorb moisture that will affect ball performance, says Dean Snell, golf ball development manager for Taylor Made Golf. So when the Carlsbad, CA-based company sought a package for its new Inergel(TM) golf balls, it wanted a barrier container.

Called airtight, this first-of-its-kind plastic sleeve, developed by Taylor Made and consultant The Baxter Group (Sherman, CT), keeps the new balls fresh and dry. Blow-molded from a blend of high-density/low-density polyethylene, the HDPE keeps moisture out while the LDPE provides flexibility. The sleeve, which received a patent in March, is called Moisture Block(TM).

"The phenomenon of velocity loss over time has been downplayed by competitors over the last few years," says Snell. "But I can guarantee it's true." He claims that moisture absorbed by balls packed in conventional paperboard folding cartons over one year can shorten a drive by 12 to 14 yards. The plastic sleeve exhibits an MVTR of below 0.4 g/100 sq"/24 hr.

Moisture Block is extrusion blow-molded by Progressive Plastics (Cleveland, OH) using shuttle equipment. Molds emboss the Taylor Made logo on each of the two flat sides, which permit stacking. Progressive also applies labels to each of the curved panels of the container. The pressure-sensitive labels are 2.5-mil polypropylene, screen-printed and hot-stamped with foil by CCL Label (Rosemont, IL).

Once loaded with three golf balls, the sleeve is sealed with a cap that is custom injection-molded by ScottEk Manufacturing (New Milford, CT) of the same blended material as the container. The cap is screen-printed by ScottEk and by Permanent Label (Clifton, NJ).

The one-of-a-kind machine for filling and capping the sleeves was custom built by The Baxter Group in about five months. "The basic concept was modeled after any standard packaging line, but in this case there were certain needs that required special applications," says Dave Cistone, technical director at The Baxter Group.

The sleeves now arrive loose in a bulk container at Taylor Made's production facility in Pontotoc, MS, from Progressive Plastics. By July, they will be arriving stacked, Cistone says. An operator stands the sleeves on end on a conveyor with rails that keep the sleeves from falling over. The sleeves pass through a feedscrew that properly spaces them into the filler. Balls are dumped into four separate floor-level hoppers according to the numbers on the balls, one through four. The balls are conveyed from the hoppers up ramps to the filler's chute. Gravity carries the balls down chutes, and a mechanical stop allows only three balls to be released into a sleeve at a time.

Caps are loaded into a vibratory feeder and drop past a Baxter Group-supplied vision system that checks if the company logo on the caps faces the same way as the logo on the labels. If not, a rotary actuator orients the caps in the right direction. Once the cap is properly oriented, it's snap-fit onto the sleeve. Filling and capping are done at 150 sleeves/min.

At the packing station, an operator places four sleeves into an 18-pt solid bleached sulfate carton from Shorewood Packaging (New York, NY). The cartons are offset-printed in three or four colors plus a UV coating with the Taylor Made name hot-stamped in blue, copper or silver.

Taylor Made required that the machine be built quickly because the company was trying to beat a competitor to the market, says Brooke Baxter, president of The Baxter Group. Baxter expects to work with Taylor Made to make the machine fully automated. "Some of the bells and whistles that would have been appropriate for a finished line have been tabled until [Taylor Made] sees some sell-through numbers," Baxter says. "But the main objective was met, which was 'Get out there first.'"

Cistone says his company's investment of time and money into the design and construction of Taylor Made's machine was well worth it. "We hope that as Taylor Made's business increases and they need more capacity, they would buy another machine [from us]. It's not like we started from scratch [when we built the machine], we had ideas and concepts from how we've done things like this before."

But do these sleeves do the job? Snell says that because the packs just hit the market in April, it's too soon to tell how the balls will perform after an extended shelf stay.

Snell wouldn't disclose the costs involved in developing and manufacturing the sleeve, but he says the overall investment vs the benefit was favorable. He says Taylor Made's main objective with this sleeve was to give amateur golfers the same advantages as professionals.

"On the PGA tour, manufacturers ship balls to [the players] fresh in sealed aluminum foil packages. We wanted to bring that kind of benefit to all people, not just tour players," he says.

Taylor Made executed a preliminary introduction of the sleeved balls in January '99 at the PGA show in Orlando, FL. As a result, Snell says nearly 30 players worldwide are or will be playing the Taylor Made balls this year. "The performance has been outstanding from the comments we got back," he says.

The box of 12 premium balls retails for $40 to $48, depending on the ball type. The balls are available in sporting goods stores, pro shops, through mail order and in on- and off-course shops across the U.S. and in Europe, Japan and Canada.