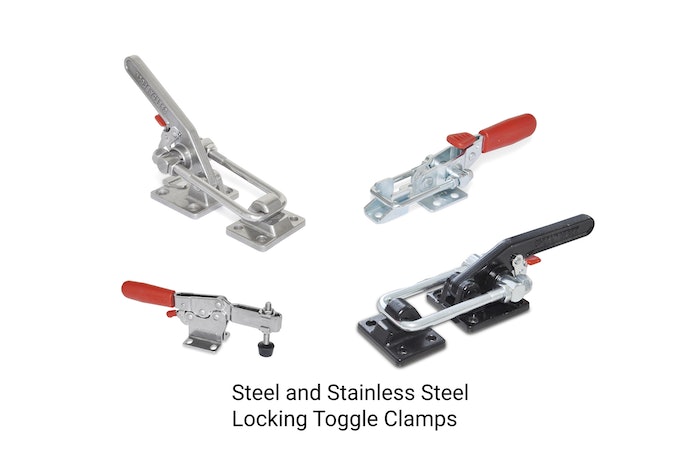 The RoHS compliant GN 820.3 horizontal acting toggle clamps, with a horizontal mounting base and safety hook latch, have a safety function whereby, during closing, a spring-loaded safety hook latch ensures a secure locking connection. This prevents the inadvertent unlocking of the clamp due to vibrations or an accidental attempt of loosening/opening the clamp. To open and release the clamp, an individual pulls up on the finger grip to disengage the safety hook latch mechanism, offering one hand operation. These clamps work according to the toggle principle of the lever and clamping bar moving in the opposite direction. The clamps also require less space for the clamping action. There are also horizontal acting toggle clamps in the U-bar version with two flanged washers that can accommodate an application specific clamping screw.

The GN 851.3 horizontal latch type toggle clamps, with horizontal mounting base, clamping arm, and safety hook and the GN 852.3 steel & stainless-steel latch type toggle clamps, heavy duty type, with safety hook, are RoHS compliant. The clamps are compact in design and can be used to ensure high holding capacities. The circular movement of the handle is transformed into linear action of the latch. In the clamped position, the U-bolt latch with clamping arm is parallel to the plane of the operating handle. When clamped, a safety hook positively locks onto the body, which prevents inadvertent or vibration-induced release from the clamping position. Unlocking of the safety hook is achieved by one-hand operation. The stroke of the U-bolt latch of these toggle clamps can also be adjusted within its range.