The automation supplier went back to the drawing board to create ctrlX Automation, a software-driven open automation platform that provides flexibility and scalability through app-based functionality.

Looking to reinvent your technology, it might make sense to ask what some of the key innovators in the world of technology might do. That’s exactly what Bosch Rexroth did with its latest control platform—reinventing automation rather than just reiterating existing technologies.

“We wanted to do something that would bring significant improvements for the automation market,” said Dave Cameron, director of sales for automation and electrification solutions at Bosch Rexroth. “So we asked, ‘What would automation look like if it were invented by Apple, Google, or another innovative company?’”

The answer involved starting over at the drawing board, which Cameron likens to carmaker Tesla. “They didn’t just take a combustion engine design of the automobile and create an electric vehicle,” he said. “They started with a new design.”

Introducing what it’s calling the ctrlX Automation platform, Bosch Rexroth has done away with traditional boundaries between machine control systems, IT and the Internet of Things (IoT). It’s a more flexible and scalable platform, providing both centralized and decentralized automation topologies with the help of a Linux real-time operating system, open standards, app programming capabilities, web-based engineering, and a comprehensive IoT connection.

Bosch Rexroth has a strong focus on primary and secondary packaging applications, and that will serve as a target market for the new automation platform. But it will serve a “vast market of applications,” Cameron said, including additive manufacturing and traditional machine tool operations. End users will be attracted by the space savings in the installation, including the reduction of cabinets required and the elimination of cooling in the cabinets, noted Bipin Sen, regional sales manager for Bosch Rexroth. From the OEM’s perspective, ctrlX Automation provides them the ability to develop their own applications and their own IP that can be embedded in drives. “It allows OEMs to develop machines that are cutting-edge and differentiates them from other OEMs,” he added.

In the past, machine design was mainly about bringing together pieces and trying to optimize the results. But now we live in a world much more driven by software. “Machine design and engineering really means software development now,” Cameron said. “The ability to engineer faster is greatly based on software tools.”

The ctrlX Automation platform combines the latest engineering software technologies with all programmable logic controller (PLC) and motion tasks. Software functions are combinable in any number of ways with ready-made, customized and customizable apps—which could be created by Bosch Rexroth, its customers, or third-party suppliers in a variety of programming languages such as C++ or IEC 61131, script languages such as Python, or new graphical languages such as Blockly.

Bosch Rexroth is calling the new platform the smartphone of automation, with Cameron noting that it mirrors the user-friendliness. “It’s the most flexible platform with the most scalable hardware. The software solutions are very flexible. Users can create new apps in a variety of programming architectures,” he said. “They can also modify apps any time without really changing the hardware of the system.”

The openness of the system liberates machine manufacturers from dependency on the availability of PLC specialists and proprietary systems. Configuration and commissioning of automation components is completely web-based, eliminating the need to install software. The system environment is also available virtually, enabling programming without hardware. The development environment also supports GitHub, providing access to millions of registered users prepared to share code and giving designers access to virtually unlimited support.

In total, ctrlX Automation cuts the engineering time and effort by 30-50%, significantly reducing time to market for new machines.

The ctrlX Automation platform supports all common open protocols and interfaces needed in the industrial market, Cameron said. More than 30 direct connection options and communication standards are offered, including the increasingly popular OPC UA along with up-and-coming standards such as time-sensitive networking (TSN) and 5G. “The ctrlX data layer ensures that the real-time and non-real-time data exchange is shared across domains and reduces the engineering effort,” Cameron added.

Bosch Rexroth is looking to future-proof the automation technology in a number of other ways, in addition to future communication standards. It also enables what manufacturers are looking for in the way of artificial intelligence (AI) and machine learning, Cameron said, which is “key to realizing the factory of the future.” The factory of the future is Bosch’s definition, he added, for the “ability to be flexible, be connected, and be able to handle a lot size of one.”

The platform takes advantage of the trends in technology that enable more powerful processing capabilities in ever-smaller form factors. It’s based on a new generation of multicore processors that provide sufficient processing power for almost all automation tasks and can be integrated into embedded PCs and industrial PCs, or directly into drives.

Aspects of ctrlX Automation are available now for some applications, including handling and robotic applications. “The portfolio will be expanded continuously over the next few years,” Cameron said.

The app-based system makes it easy to add new automation and control functions at any time. “It’s very flexible in terms of adding the functionality you need and making it more than just traditional machine control,” said Brian Schmidt, applications engineering supervisor for Bosch Rexroth. Users can browse for apps and install additional functionality in much the same way as you shop in app stores for your phone, he added, showing off several existing apps that target AI-based analytics, motion control programmed with Node-RED, 3D visualization of robotic motion, and more. “With this architecture, we can stack on functionality. If we decide a year from now that we want to support a new programming language, it can be added on as an app. It might not even be an app that Bosch Rexroth has developed.” 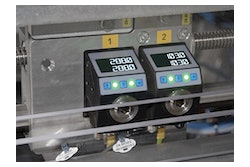 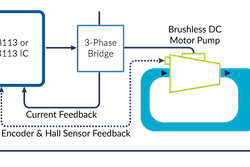 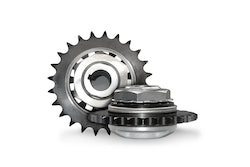