A look at the reasons why machine builders are in favor of Ethernet-based, networked remote and local I/O with a special focus on how motion control networking fits in. 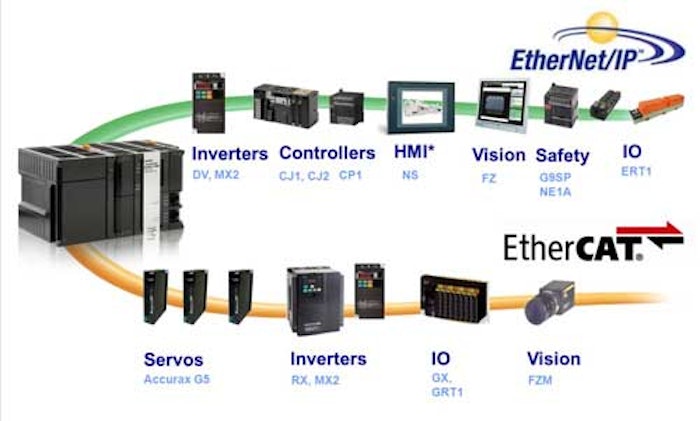 Machine builders, manufacturers, and systems integrators continue to migrate their industrial automation to Ethernet-based, networked I/O from hardwired discrete and analog signal installations, according to a recent independent survey.¹ Over the past decade, they recognized and took advantage of the cost and labor reductions, as well as improved up-time from faster troubleshooting that Ethernet-based systems provide.

Across all groups involved in the building and implementation of next-generation machines, the importance of high-speed networking and the availability of compliant hardware is a given. Even long-time users of fieldbus networks such as DeviceNet, Profibus, AS-i and Modbus are beginning to shift to Ethernet-based networks. The reasons why are compelling: reduced labor costs, standardization of one network media type for the entire machine, fewer wiring mistakes, smaller main machine panels, and higher throughput

According to Jay Hughes, senior application engineer at Omron Industrial Automation, the transition to networked remote I/O began about three or four years ago and is moving rapidly from traditional fieldbus networks to several Ethernet-based networks such as EtherNet/IP, EtherCAT, and PROFINET.

“People have traditionally built with DeviceNet, and a base of users and developers have continued to do so. However, EtherNet/IP has gained momentum and is replacing some DeviceNet for I/O communications in new applications,” notes Hughes.

The advantages of moving from traditional fieldbus networks to an Ethernet-based topology are considerable:

• Reduced cabling costs
Ethernet cable is much less expensive than most other cable choices.

• Standardization of infrastructure
Both EtherNet/IP I/O and PROFINET I/O are designed to coexist with other protocols on an Ethernet infrastructure, so machine builders only need to run one Ethernet network to support remote I/O, HMIs, Safety, Motion and SCADA software.

“From my experience, 80 to 85 percent of machine builders are using some sort of distributed, networked I/O solution,” says Hughes. “A host of networks are available, and networked I/O solutions are reducing costs. Reducing labor costs remains paramount to an OEM, so they are finding it a lot less expensive to buy a networked product upfront than spend time wiring a non-networked solution afterwards.”

Other factors include material and physical costs. The cost of copper has increased by almost 70 percent in the last two years, making it more expensive to buy wire. The high cost of wire is driving people to remote networked I/O solutions, enabling them to consolidate numerous I/O wires into a single network cable. Furthermore, the ability to use smaller control panels is significant. Larger panels cost more, and all customers are expecting machines to have a smaller footprint with increased functionality to reduce panel size. Reducing the size of control cabinets is less expensive and uses less of a customer’s floor space as well. Many manufacturing facilities are trying to increase equipment density—get more machines into a given space.

Product Implications
Ancillary to the movement to remote networked I/O platforms are changes at the product level. For example, there is a shift from motion control products (e.g., servo systems, variable frequency drives) being controlled by digital and analog signals to being controlled on faster motion control networks such as EtherCAT, Sercos or Mechatrolink. This change in motion technology provides the machine builder with a number of advantages:

1. Increases the level of machine/motion performance. The coordinated motion control that can be accomplished by using a motion control network allows the machine builder to create a machine with greater throughput capabilities, as well as reduce product scrap during machine startup. Greater machine throughput can be achieved with coordinated motion control over EtherCAT. For example, this Ethernet-based network is capable of updating 40 motion axes in 276 microseconds with repeatability of synchronization within one microsecond.

2. Provides better diagnostics. When motion control products are on a motion network, any warnings, errors, or other anomalies can be communicated in real time to a local operator, supervisor, maintenance personnel, or other individuals responsible for machine operation and upkeep. This notification can be as simple as a message on a local HMI to an email or text message. Also, if the machine is connected to the Internet, the machine builder can access their machine from anywhere in the world. This allows the machine builder to remotely observe a problem in real time, and even take corrective action from a remote location.

3. Enables faster setup. Network configuration is streamlined through automatic node identification, while multiple remote axes are made much easier to commission, as there is no longer a need to walk around the machine to plug and unplug cables. Saving the configuration after tuning each node is now a much faster process.

Positive Factory Level Ramifications
One market segment where the above movements are particularly pronounced is automotive, where Tier One and Tier Two suppliers are responding to changes in demand. As the economy continues to recover, these suppliers are seeing an increase in production volume. During the economic collapse, major automotive manufacturers slowed down production considerably; it didn’t cease, but their pre-buying from suppliers dropped remarkably. Now, orders are increasing significantly.

Another key indicator is the packaging industry, where machine builders are under constant demand for cost reduction on machinery. Upfront costs between distributed I/O solutions and traditional direct-wired ones are scrutinized since hardware for distributed solutions is perhaps a bit more expensive, but manufacturing costs drop considerably to tip the scale in the direction of distributed I/O.

“Among machine builders, we see a reduction of 10 to 15 percent in their cost to manufacture and ship equipment when using distributed I/O and intelligent control of motion products,” says Hughes.

Numbers such as these will undoubtedly fuel the growing momentum for high performance in industrial automation.

NORD Provides Drive Electronics for a Wide Range of Applications

The SMAC LDL electric actuator, available in 1/2-in. and 1-in. widths, is said to be cost competitive with pneumatic cylinders.
SMAC Moving Coil Actuators
Feb 26th, 2021

OMAC released The Practical Guide for Remote Access to Plant Equipment which is the result of a workgroup of 37 industry leaders convened by OMAC to define best practices for secure Remote Access to plant equipment.
OMAC
Feb 12th, 2021

ABB's RobotStudio offline programming and simulation software has been upgraded with a new virtual robot braking distance function designed to create an exact simulation of the real-world stopping distance of a robot.
ABB Robotics
Feb 11th, 2021

The levitating material handling technology from Beckhoff is being used by Plasmatreat in its equipment to position materials beneath spray nozzles for plasma pre-treatment and coating.
David Greenfield
Feb 4th, 2021