Conflex (www.conflex.com) wrapping machines are used primarily in the food, consumer goods, electronic media, and printing industries. Customers in these sectors demand user-friendly machines with intuitive interfaces. So it’s hardly any wonder that Conflex was an early adopter when servo technology started kicking in a few years back.

The firm has continued to evolve, too. In particular, the ServoFlex film seal wrapper has seen dramatic changes from its previous incarnation. The old ServoFlex design utilized numerous intelligent drives that handled the automation and motion control aspects of the machine. The required programming time for numerous drive controllers was cumbersome. “It was a three-servo system—each axis had its own controller that had to be individually programmed,” says Mark Lorenz, electrical applications engineer at Conflex. The drives weren’t equipped for Ethernet connectivity either, which hampered Conflex’s networking efforts.

Adding or removing I/O from the system further complicated the problem. “If even a single I/O point failed in the intelligent drive system, we’d have to replace entire boards,” explains Lorenz. “It was also very expensive to replace the drives themselves whenever we had a failure. It became apparent that in order to be flexible and better manage our controls, we needed a new solution.”

In late 2005, Larry Koenigs, electrical engineer at Conflex, encountered the region sales manager for Beckhoff Automation (www.beckhoff.com). “At the time, we had made what we thought was our final decision on a new platform from a major automation and controls vendor,” Koenigs said. “It was an acceptable motion controller with PLC functionality, but it didn’t have all the programming and design flexibility that we hoped for. We just accepted that we were going to have to put more time and effort into the controls design than what was ideal. The call from Don just happened to arrive at the last possible moment. He called on a Friday when we planned to order our controllers that following Monday.”

Conflex then learned about the DIN rail-mounted Beckhoff CX1020 embedded PC and TwinCAT automation and motion control software. “The solution put forward by Beckhoff turned out to be exactly what we were looking for and allowed us to create the electrical controls system we wanted,” Koenigs said. “We were impressed enough with Beckhoff PC-based controls that we decided to make a major change of course at the last possible minute.”

In addition to being a good technological match in terms of openness and flexibility, the Beckhoff system was attractive from a cost perspective, too, adds Koenigs. Also appealing is that the TwinCat software complies with IEC 61131-3, a programming standard that is gaining increasingly wider acceptance on a global basis.

“Using the CX1020 with TwinCAT, we handle all PLC functions and motion control on a single device,” says Koenigs. The new Servo Flex machine is a four-axis system: one master axis with three slave axes. This horizontal film seal wrapper delivers continuous motion at up to 100’ of film/min with an advanced reciprocating hot-knife seal system. ServoFlex machines feature cradle-style powered film feed, which is easy to load and allows for fast changeovers.

Conflex found that several of the programming libraries in TwinCAT were particularly helpful. “The Flying Saw code library saved us time and effort by providing pre-written software functions to achieve a great deal of our motion programming,” says Lorenz. On the Servo Flex, a vacuum conveyor holds the wrapper film and leads it to the sealing area, which features a reciprocating motion. “We have to hit a very specific mark on the film, so the Flying Saw program handles the sealing motion of the knife moving back and forth on the machine,” says Lorenz. “A pneumatic cylinder closes a sealing jaw while the cut is made.”

Also helpful, says Lorenz, are function blocks that control the machine’s film heaters. These function blocks reside in a library and are readily available programming tools that can be used without having to write code from scratch.

The superimposed-move function is another feature that users of the machine find useful. “It’s like an automated override command,” says Lorenz. “If conditions require it, you can superimpose a motion on top of the motion a servo motor was going to make. Remember, each servo motor is electronically cammed to move synchronously with some other axis of motion. But if need be, you can superimpose a motion to maintain print registration.” Features like this, says Lorenz, are big time savers.

Any controller Conflex uses must provide very fast control of the film cutting knife to exactly match the speed of the incoming wrapper film. “The Industrial Ethernet fieldbus, EtherCAT, helped a lot in terms of ramping up our control speed on the Servo Flex machines,” says Joe Morrissey, Conflex product manager. “Beyond top performance, Conflex had to choose a fieldbus that will be supported well into the future and won’t go obsolete in a few years.” Conflex customers also enjoy remote diagnostic capabilities for troubleshooting via standard Ethernet connectivity with the EtherCat-equipped machines.

“With the low-cost Beckhoff EtherCAT I/O system, we have the best solution available for our previous I/O board challenge,” Koenigs says. “We only buy the I/O points we need, and we can make replacements as needed, one I/O card at a time. The simple, direct I/O connection to the CX1020 made this decision that much easier.”

The controls upgrade of the ServoFlex line was aimed not only at making the machines perform better, but also at making them more flexible and even easier for end users to operate. “ServoFlex machines feature pre-loaded training videos that can literally train end-users on how to quickly learn how to operate our machines,” Morrissey said. “This is a pretty cool feature. It allows us to further differentiate ourselves as a machine builder.”

HMI is special, too, says Koenigs. “Because we run Windows CE on the CX1020 Embedded PCs, we were able to create a human-machine interface that is virtually unlike any other in the industry,” says Koenigs. “We featured it at our booth at Pack Expo 2006 in . Another added bonus from the use of Embedded PCs is that all the software resides on a Compact Flash (CF) card, so changes can be made very easily in the field if needed.”

With the majority of the controls upgrade complete on the ServoFlex line, Conflex claims it can offer smaller machine footprints, more competitive system costs, greater flexibility, and faster machine delivery. “Before 2006, Conflex machines had four separate control devices, each with different bits and pieces of the code for the whole machine spread throughout,” says Lorenz. “Now, with the CX1020, we have one device on our machines that contains all of our programming. It’s much more streamlined.”

TwinCAT proved to be a highly flexible environment for Conflex machine programming. “Conflex is able to use a standard set of programs for three different models of machines that vary depending on the application,” says Lorenz. “We can simply choose the respective program to match our customer’s application when the system boots up. We’re able to make immediate modular design changes in a few hours that would have taken up to several weeks of cumbersome work in the past.”

Lorenz also likes the way his company’s machines can now be more easily integrated into lines having machines from a variety of packaging machinery manufacturers and extract data from the entire line. “The Ethernet capability is a huge benefit for our customers and helps us deliver the most flexible machines possible,” says Lorenz.

And the cost of this new controls architecture? “The old drive system with integrated intelligence cost about triple what we’re paying for a Beckhoff system that does more work,” says Morrissey. “With the kind of success we experienced on the ServoFlex line, Conflex will be expanding the use of Beckhoff controls into other machine lines to fully apply our expanded PC-based controls expertise.” 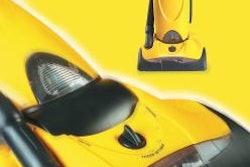 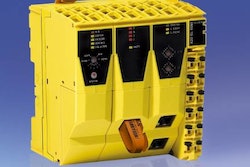