Pat Reynolds
Shown above are one of its power modules (left) and two servo drives; one drive has an FM control module attached.

At F&L Machinery Design, there has been a steady shift from mechanical linkages to electronics in the high-speed tube decorating equipment the firm makes. One of its most recent systems, for example, includes 46 axes of servo-controlled motion. Servo motors, drives, and other key automation components are supplied by Emerson Control Techniques.

The F&L system takes tubes through a series of operations that include infeed and outfeed buffering, corona or heat treating, registration, printing, UV curing, coating, a second station for UV curing, and cap application. The use of servo technology, says F&L engineer Tom Kelly, has decided advantages.

“It gives the customer infinite control instead of the fixed motion you get with mechanical components,” says Kelly.

Control of the sophisticated system is handled at multiple levels. An Allen-Bradley PLC from Rockwell handles logic. Drives governing certain axes of motion where information-sharing is especially crucial are controlled by MC206 multi-axis control modules from Emerson. There are three of these, each controlling four drives. All other drives have their own distributed intelligence—sort of.

“The drives on their own have no intelligence, no ability to do positioning,” explains Paul Winget of Servo Motion Solutions, the Emerson Control Techniques’ distributor that played a key role in the design of the printer. “But the Emerson FM programming module in these drives is integrated with the system’s main PLC in such a way that these single-axis drives become intelligent. Motion control is of a distributed nature handled by these individual drives rather than by a central motion controller.”

The best way to appreciate the advantages F&L gains by moving to servo technology is to focus on a single function of the complex system. The oscillation rolls in each of the eight tube-printing stations is a good place to focus. Two parallel rollers that slide back and forth against each other as each one rotates, the oscillation rolls play an important role in metering ink to the color head that ultimately lays the ink on a tube.

“In the past,” says Kelly, “mechanical linkage arms, cams, and a cross-tie bar with a pivot assembly were used for the oscillating rolls. By moving to servo technology, we have what amounts to push-button control of oscillation instead of mechanical control. We can change all eight oscillation points in thirty seconds as opposed to an hour, which helps a lot in job set-up. It also brings far better control when executing a ‘fade’ from one color to another. Your ability to meter the ink is greatly improved over a system whose oscillating rolls are mechanically controlled.” 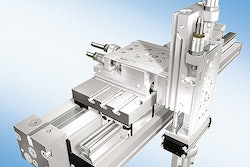 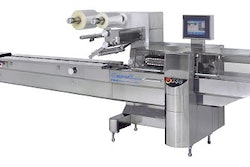