Confidential survey of readers identifies some problems, but assures that fixes have been offered. Performance guarantees are few and far between. 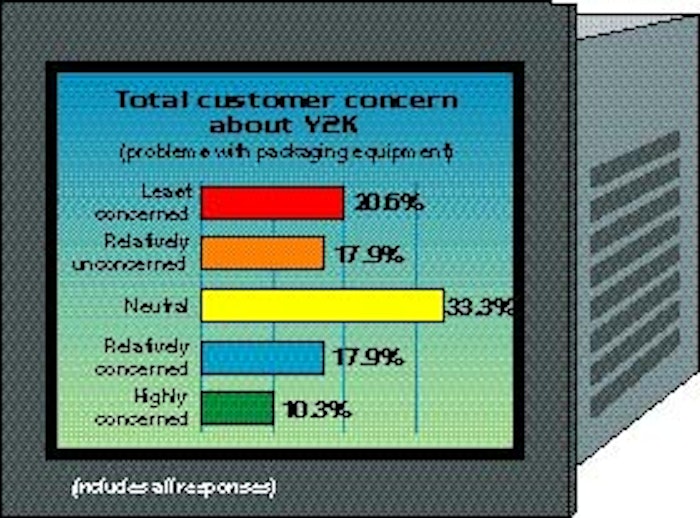 It was just this wide-ranging response that encouraged Packaging World to conduct a confidential reader survey on the topic. PW retained Frambach & Co. (Elm Grove, WI) to conduct in-depth telephone interviews with a selected group of packaging people involved specifically with equipment. However, instead of just contacting end-users of packaging equipment, PW included machinery makers and controls manufacturers in the list of individuals to be contacted.

The information and data collected is not designed to be statistically accurate; in fact Frambach completed a total of just 40 interviews. But because the individuals included were carefully screened, PW believes the results, if not statistically projectable, provide strong indications of industry opinion trends. No matter how an individual or his company evaluates the Y2K debate, it's safe to say that view is represented in these results. This wide range of opinion is similar to the comments made on the record to PW reporters (see p. 58).

Each of the three groups (packagers, machinery makers and controls manufacturers) were asked to measure the level of concern (on a scale of 1 to 5) that packagers were showing about the Y2K issue. Overall, the respondents (Chart 1) explain that packagers have a wide range of feelings on the subject. While 27% report a modest to high level of concern, another 37% of respondents report low or no concern about the topic.

However, if we isolate only the responses by packagers (Chart 2), only 14% of that group show a modest to high level of concern. On the other hand, 71% of the packagers studied say they are unconcerned or relatively unconcerned.

This may not be as inconsistent as it appears. One of the reasons that many packagers appear unconcerned about Y2K is because of assurances they've received by machinery builders or by controls suppliers. However, these packager inquiries to their suppliers may be why the machinery builders and controls vendors feel the level of concern is higher than what the packagers themselves report.

"We've been working on Y2K for about a year," said an engineer with a major candy manufacturer. "Three or four months ago, we got into it very heavily. We've identified some standard solutions, so it's been pretty simple to move forward.

"Interestingly, we found that 1/1/2000 wasn't the big problem. Yes, we found some problems with accessing data and trending issues. But for leap year or leap day, February 29, 2000, our whole system just shut down. It was the equivalent of putting in July 45th; it does not exist and everything locked up. Visual Basic and Microsoft Access were running on our computer at the time. We're still putting in the remediation items to fix it. For some Year 2000 issues, we're still patching some fixes in place. But we feel we have a handle on it."

Of those companies that have tested all appropriate equipment, the controls makers lead the way with 88% of our respondents reporting 100% testing. Even for packagers and packaging machinery builders, seven of 10 report they have tested all machines.

When asked to define the sources of Y2K problems that had been identified, packagers point to PC controllers 33% of the time, while older PLCs were cited as the source of problems about 22% of the time. Unfortunately, some 46% of end users weren't really sure where their problems stem from.

"Controls software is not much of an issue," says a vice president for engineering at a major food processor. "Anything written in-house was written in an environment that was fully aware of Y2K."

The survey also asked about whether packaging machinery builders and controls vendors offered Y2K guarantees to their customers (Charts 4 through 7). There is quite a difference in the responses between the two types of companies.

Of the packaging machinery manufacturer respondents who knew their company policy, half said they offered guarantees, half said no. A full 13% said they didn't know. On the other hand, there was no uncertainty among controls manufacturers. Nearly 90% of the sample stated that no guarantee was offered.

The representative of a major motor manufacturer could serve as a summary of the comments many controls makers made relative to offering guarantees or test programs.

"Every product we have ever made is compliant, and we have a letter signed by our president to that effect that we issue when asked," she reported. "That's why test programs or upgrades just aren't necessary."

The most controversial question in the PW survey was when machinery suppliers and controls makers were asked to identify what organization should bear the responsibility for fixing Y2K programs (Chart 8).

In total, the responses are evenly spread, from packagers (34%) to controls vendors at 32% to machinery builders at 27%. Only systems integrators got off easy, being mentioned by only 7% of the respondents. It needs to be pointed out that many of the responses to this question gave more than one answer and all are reflected in the chart.

One representative of a maker of electronic control parts spoke for many. "I hadn't really thought about that," he said. "I think it's a collective effort. Controls suppliers and the machinery OEMs and the end-users as a group need to make sure it will all work together. The key is going to be all parties working together."

In the same way, we asked packagers to identify the department or individual within their companies who had the responsibility for handling Y2K compliance issues.

The response from an engineer at a major brewer is fairly typical. "We have a regular Information Systems Group that managed the project," he said. "The group worked with both electrical engineering and corporate engineering departments."

The final question posed to packagers asked them to rate their level of satisfaction with vendors in dealing with Y2K. Almost unanimously, the end-users gave their suppliers a "very satisfied" rating of four on a one-to-five scale.

Although many simply registered a numerical response, some end-users really offered positive votes of confidence. A representative of a major frozen foods producer said, "Most have been pretty good. And many have been very pro-active about this issue."

Two of the respondents gave a three or neutral number, and admitted to both good and bad experiences. The representative of a large candy company reported: "Mainly, it was pretty good. A couple of times we asked for letters and verifications, and it really took having to hound them for it. I think they were [having trouble] working out the verbiage, and that's what took so long."

A major cosmetics manufacturer's representative was irked by costs. "Some companies we were very pleased with, others less so. Mainly, that's because they are charging us an outrageous sum of money to test machinery that is not date-dependent.

"But," he continues, "we have to do due diligence, so we are going ahead with it. But it doesn't make us very happy."

Some respondents answered with a five for highest satisfaction. "Everybody has really been very accommodating," noted the representative of a regional snack foods baker.

Next month, in Part 2 of this special report, PW will more fully report the comments from machinery builders and controls suppliers. Perhaps the most comforting news that can be reported about Y2K is that rarely did our research people encounter people who would refuse to discuss the subject. Most took the subject seriously, and we believe offered thoughtful responses.