Companies can now use ‘pasteurized’ term on labels of food products that have been treated with radiation to kill bacteria. 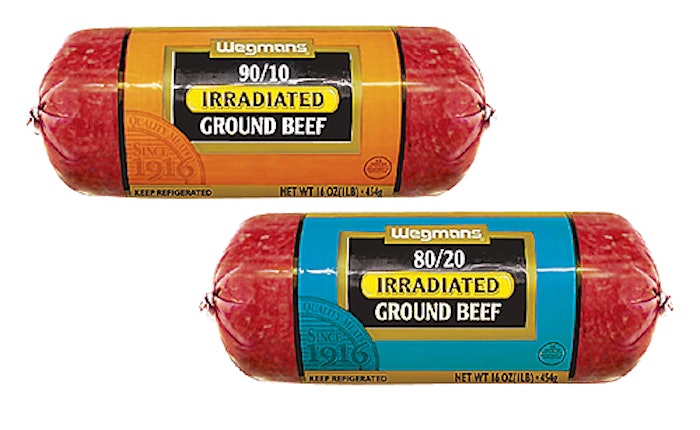 Congress is finally on the same page as the American Heritage Dictionary. Thanks to the Farm Bill passed in May, Capitol Hill now also defines the term “pasteurization” as “the act or process of destroying most microorganisms in certain foods, such as fish or clam meat, by irradiating them with gamma rays or other radiation to prevent spoilage.”

That congressional belief is reflected in a Farm Bill provision that allows food companies to use the term “pasteurized” in ingredient panels on irradiated foods. “Treated with irradiation” had been the only previously approved terminology.

Every food trade association worth its salt has been pressing the Food & Drug Administration to allow use of the term “pasteurization” in place of “irradiation.” But the agency, despite previous marching orders from Congress, had been dragging its feet. So Congress, in an admittedly “dead of the night” political maneuver, decided to force the FDA’s hand.

However, in what may be a paradox of monumental proportions, some food companies currently selling irradiated foods are finding the pasteurization label hard to swallow. Take Wegmans Food Markets, Rochester, NY. Just about the time the Farm Bill was being signed by President Bush, the 62-store chain began selling its own branded fresh ground beef that is irradiated with SureBeam’s (San Diego, CA) electron beam pasteurization technology. Earlier, Wegmans had begun to market irradiated frozen ground beef patties supplied by the Excel subsidiary of Cargill, Inc., Minneapolis, MN.

Katie Crane, spokeswoman for Wegmans, says the company considered using the term “pasteurized” on its fresh beef labels instead of “irradiated.” But Wegmans decided against using “pasteurized” on the label because the company was concerned that consumers might think the chain was being “misleading,” according to Crane. “That might get a lot more people upset than would be by us selling irradiated fresh ground beef,” she adds. Nor is Wegmans planning to change its label language in the wake of the Farm Bill passage.

Neither is Cargill planning to change its labels for irradiated ground beef sold by its Excel subsidiary. “The word ‘irradiation’ on the label hasn’t stopped us from moving ahead,” states Mark Klein, a company spokesman. “We are satisfied with how things are going.”

Nonetheless, Klein believes “pasteurized” is a better term because it accurately describes the process the food goes through and does so in a way consumers can easily understand.

“Seeing that word would help the consumer know that something has been done to the product to enhance its safety,” Klein adds. That is important because irradiated ground beef sells for 10 to 30¢ more per pound than conventional ground beef.

The Farm Bill’s approval of the use of “pasteurization” comes almost five years after Congress passed the FDA Modernization Act of 1997. In that bill, Congress thought it had made it clear that it wanted the FDA to revamp its labeling requirements for irradiated foods, and within 18 months. But nothing happened. In an effort to goad the agency, the National Food Processors Assn. filed a citizens petition at the FDA in 1998 asking the agency to eliminate its requirement that irradiated foods carry a notation in the ingredients panel noting the irradiation. The petition argued that the requirement “causes consumers concern about a non-existent hazard.”

Finally, on February 17, 1999, the FDA issued a notice of proposed rulemaking, raising the possibility of alternative terms to “irradiation.” An avalanche of comments resulted, but in the three years since there had not been a peep out of the FDA. The rulemaking stopped dead in its tracks.

In the wake of the Farm Bill’s passage, Jeff Barach, vice president of special projects for the NFPA, says it was never his group’s intention to eliminate “irradiation” from the label entirely. He explains his members want to be able to use “irradiation” and “pasteurization” on a food label at the same time. “That would be a winning combination,” he says.

The pairing of the two terms may turn out to be as winning a combination as that of Sen. Tom Harkin (D-IA) and Titan Corp., developer of the SureBeam process. Harkin is chairman of the Senate Agriculture Committee. Titan has an electron beam pasteurization plant in Iowa, and the technology was developed in part at Iowa State University. It was Harkin who slipped the pasteurization labeling provision into the Senate version of the Farm Bill when the bill came to the Senate floor.

The provision can be found on page 680 of the 690-page conference committee report on the final bill. The labeling issue was not aired during Farm Bill hearings during this Congress. The House bill did not contain the Harkin provision.

The provision itself falls somewhere between incomprehensible and potent. The ostensibly operative words say: “The intent of this provision is to make explicit that the term ‘pasteurization’ is available to describe a food safety effect, regardless of the technology or process employed to achieve that result.”

Companies can immediately apply to the secretary of the U.S. Department of Health and Human Services (HHS)—which is home to the FDA—to use the term pasteurized on irradiated food regulated by the FDA such as spices, fruits, and vegetables. If the secretary disapproves the application, or does nothing by the end of 180 days, the company cannot go forward. The secretary of agriculture is directed to do the same thing for meats and poultry.

It is hard to imagine, given the apparent intensity of feeling in Congress on this issue, and the obvious determination of people such as Harkin, that those departments would disapprove any applications. Or just sit on them. Not if they don’t want their offices moved adjacent to a nuclear waste site in Nevada.