Smart Packaging: The sounds of print

Datasound has devised a way of saving sounds, speech, music, or other digital data on paper for later retrieval. 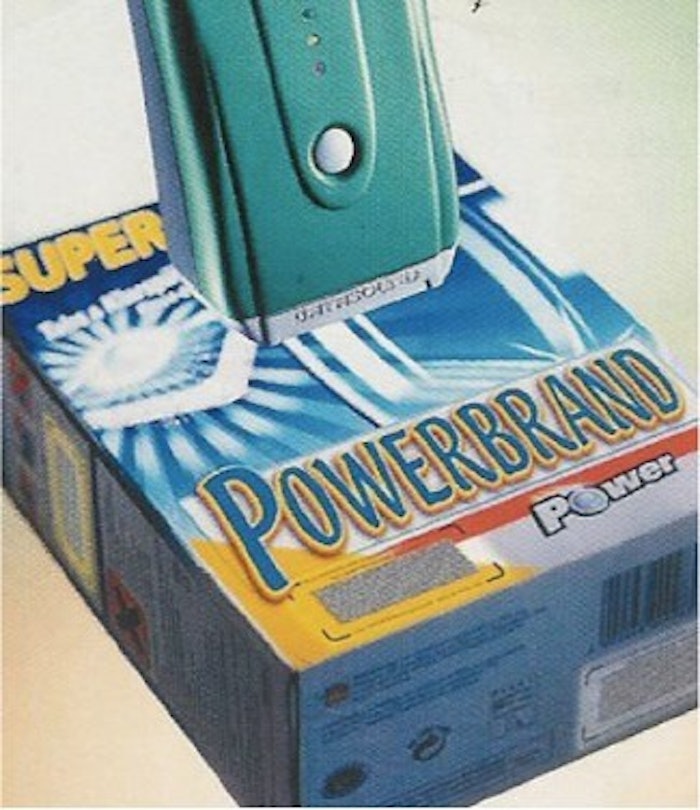 In this instance, the "record" is an 18-by-55-mm printed strip with a two-dimensional dot-pattern code. It can store 12 seconds of music, 20 to 30 seconds of speech, or 24 pages of text. Playback requires a hand-held reader that can be used alone or as a source for a speaker or headphones.

In 2002 and 2003, the product was demonstrated in use with examples from children's educational books and a music textbook, and there is clearly potential for applications in packaging, biographies, games, advertising, aids for the handicapped, and more, according to Harrop. The company had substantial backing from BASF, Henkel (which has successfully tested it in a Berlin do-it-yourself hardware store), with Siemens, and with the Fraunhofer Institut.

Henkel KGaA began an in-store promotion with a Datasound Display Terminal at the new Praktiker home improvement store in Berlin on December 4, 2003. The Datasound Display Terminal (“DDT”) was central to a promotion of Henkel’s Metylan adhesives product line. Game cards were distributed to customers who took them to the DDT inside the store, where, at the touch of a button, the Datasound Strips on their game cards were scanned and read by an embedded Datasound Strip-Reader. The Datasound technology enabled cost-effective, multimedia solutions that pique customers’ curiosity, and can be useful with packaging including tear-off promotions.

This isn’t packaging, but it’s pretty cool anyway and demonstrates the technology’s utility: Datasound employees used the strips on the back of their business cards, each containing a piece of music representative of the person. If the technology becomes popular, salespeople could use the strip to store an Excel spreadsheet with pricing information, Datasound says. Give the potential customer your card and they have all the information to make a purchasing decision. The strips could be printed on the back of an employee ID badge as a means of verifying the person's identity. In late 2003, Datasound was entering the US market. It offered the software used to compress the data and create a TIFF (tagged image file format) image of the strip, which could then be used in any page layout program.

In addition, Copapharm introduced a Talking Folding Carton using the technology that can store, play back and even print for the end user, speech or music. The printed sound strip on the carton even has extra features making it useful for anticounterfeiting.

Together with Henkel KGaA, Datasound technology and the Datasound Display Terminal were demonstrated to leading packaging experts in February 2004 in Edinburgh, Scotland, as innovative solutions for product and brand promotions, brand security and retracing the flow of goods throughout the production cycle. The response was positive.

Datasound was founded in 1998 in Ludwigshafen am Rhein, Germany. You could hear this product in action on the company's Web site www.vocalpaper.com, which offered a sample 16-second recording from Beethoven's Ninth Symphony as well as a whale song.

Datasound entered bankruptcy mid-2004, and most of the activities were suspended while it sought a new investor. It has since found an investor who is in the midst of negotiations with the bankruptcy administrator to purchase the assets. As soon as that process is complete, it will likely be operating as a fully owned subsidiary of the investor. It is a hardware and software solution provider for pharmaceutical, foodstuffs and other companies, focusing on manufacturing processes, packaging and security. Because it already offers RFID and bar code solutions, the Datasound technology could greatly complement its product line. At IDTechEx we feel this technology has a great future. For more, information, you can contact Datasound by e-mail: Christopher.tapley@datasound.de

Datasound's software technology uses standard printers found in the publishing industry to print small strips that contain 9 million to 10 million dots each. Data contained in the strip can be an audio clip that can be played using a built-in speaker on the Reader or data that can be stored in the reader's memory (168 k/bytes) and transferred to a PC via a USB port. With the ability to store up to 18 seconds of music, 30 seconds of natural speech and nearly 30 minutes of synthetic speech (easier to compress), the possibilities were thought to be endless. The technology permits three printing methods: Offset, print proofs, and laser engraving. Other print techniques are currently being tested. The software was quoted at about $345 and could be used on a single machine or a network setting. There is a nominal royalty for each strip printed. The base reader will retail for about $205. Hyperlabel potentially has an alternative system with added functionality. Hyperlabel’s technology is based on a photographic read of invisible infrared 2D barcodes. En-Vision America, Inc. has an RFID-based talking package system.

For more information on this kind of leading-edge technology for packaging, attend Smart Labels Europe at Cambridge in the United Kingdom Sep. 20-21. Or check out the IDTEchEx reports The Future of Chipless Smart Labels or RFID Forecasts, Players, Opportunities; IDTechEx contact information in the United States is below.