Motorola’s technology for economical printed electronics for smart packaging and RFID applications has the attention of printers, converters, packagers, and others.

A 20-member printed electronics team within Schaumburg, IL-based Motorola has developed technology to bring breakthrough, cost-effective potential to packaging and other applications. Interest in the group’s printed electronics has spread to a range of companies from printing press manufacturers to packagers. Although the companies could not be identified, they are familiar names throughout the packaging and printing industries. They include several Japanese packaging suppliers, printing press manufacturers, a European global packaging materials and machinery vendor, and a major United States-based foods manufacturer.

“Printed electronics are a low-cost solution in circuits manufacturing,” says Motorola team leader and director of business development Dan Gamota. He and his team at Motorola are working on technology for printed circuits that can be used in electronic point-of-purchase store displays, electronic packaging, on-package sensors, and wireless communications such as radio-frequency identification.

The technology is the first time that graphic arts inks have been integrated with functional inks, Gamota points out. “Functional” includes conductive inks that result in printed circuits, printed batteries, and the like, Gamota explains. Their research marks another foray for Motorola into nanotechnology since tiny particles added to an ink carrier provide better printing and electrical performance.

Motorola’s printed electronics technology comprises functional inks, a printing press, and Motorola’s know how—what Gamota calls the “recipe” to put it all together—in designing the circuits that permit them to be printed. A flexible substrate such as paper for a sheet-fed press or rollstock plastic film or paper provides the carrier. Printing speeds for these electronic circuits remain the same as for conventional graphic ink printing: 500 sheets/min for sheet-fed operations and 100 to 300 ft/min for web substrates.

The technique requires the printing of four layers of three different materials, meaning a printing press of at least four colors or stations, exactly as is used for conventional full-color CMYK printing. Three different materials—a conductor, a dielectric, and a semiconductor--are needed to create the electronics that comprise transistors and functional circuits.

“More stations are required if conventional printing is also done in a single pass,” says Gamota. Printing presses of six, eight or more stations are not uncommon in the printing industry. Motorola has found that any printing method—offset, screen, flexo, gravure, or ink jet—will work.

Motorola researchers used as their springboard Nobel Prize-winning research on conducting polymers from the 1970s and organic transistors that date to the early 1980s, Gamota says. By teaming with Xerox and Dow, Motorola received a National Institute of Standards and Technology (NIST, www.nist.gov) Advanced Technology Program award of $15.7 million in November 2000. The project runs through October 2005.

“Over the last four years, we’ve proven that not only can electronics be printed, it can be done economically,” he says.

In fact, four members of the team edited a book on printed electronics that they believe is the first to focus on printed electronics. Gamota, along with team members Paul Brazis, Krishna Kalyanasundaram, and Jie Zhang, edited Printed Organic and Molecular Electronics, a 695-page technical volume published in 2004 by Kluwer Academic Publishers.

One of the team’s key goals was to develop its printed electronics based on current printing technology. “And the printing industry has a very good existing infrastructure,” Gamota points out as another plus.

Applications include smart packaging such as printed-battery powered point-of-purchase displays, on-package electrical spoilage indicators, and electronic packages that can talk or light up. For instance, imagine cereal boxes with printed circuits that turn on and off the promotional graphics. “Printed electronics can be used for anything that can catch consumers’ eyes,” adds Gamota. “It can offer a sales lift to packaged goods.” The technology also has application for printed RFID tags.

The excitement in RFID has really focused attention on this technology, according to Gamota. For RFID, the antenna and chip could be created at once during package printing.

Thus, the RFID electronics are printed on a pressure-sensitive-label during label printing, rather than added separately. The production of printed RFID “tags” in a single pass knocks a whole costly assembly step out of the production process.

That makes possible economical RFID tags, on the order of 10 to five cents each, Gamota says. That’s been the Holy Grail for RFID all along.

“Item-level RFID ‘tags’ become economically practical,” Gamota adds, though he admits there are big, albeit surmountable challenges ahead to commercialize RFID printing and converting applications.

An overlacquer, standard with many package printing operations, would provide the printed electronics the protection needed. There’s also the need for both UV curing, which is common, and thermal curing, less common, in the same operation.

Gamota anticipates a “controlled” in-store trial for a printed electronics product to occur this year. Meanwhile, stay tuned as Motorola’s Printed Electronics Team continues to push its technology into packaging and RFID applications. Dan Gamota can be reached at the Motorola phone number listed below. 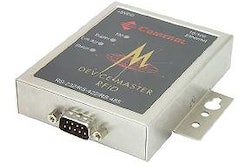 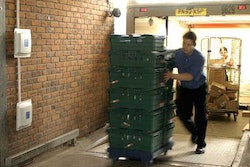 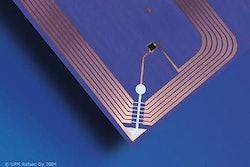 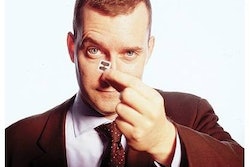