Survey: What's the value of RFID/EPC?

A number of manufacturing executives in the United States and Europe who weighed in on this survey remain unconvinced of the benefits of RFID/EPC. 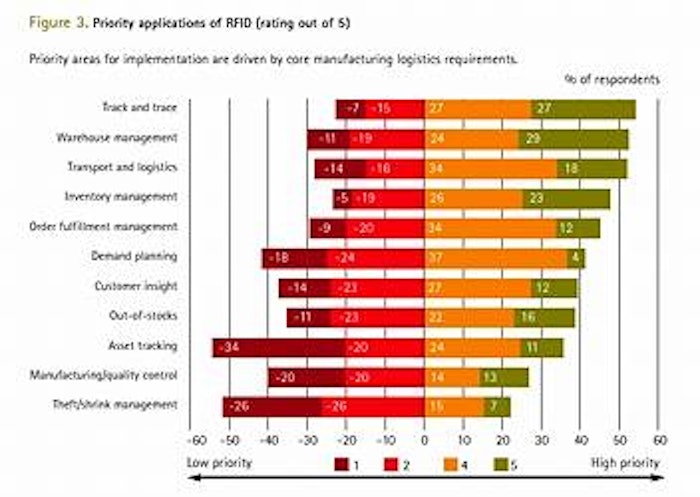 In April 2004, Accenture launched a survey of manufacturing executives across a range of companies--with the bulk coming from consumer goods and pharmaceuticals--to determine how prevalent radio-frequency identification/electronic product code compliance mandates are today. It was also to gauge manufacturers’ views on how and where it will deliver the greatest payoffs.

RFID/EPC promises to transform the value chain--allowing seamless communications from suppliers to the end consumer. When that occurs, Accenture believes manufacturers can realize step changes in business performance by creating new and innovative business models.

Survey findings, however, indicate that though the inevitability of RFID/EPC is fully appreciated by manufacturers, benefits remain unclear.

Focus on the Short Term

Many of the survey participants are focused on the short-term benefits of RFID/EPC. The top-rated benefits are ones that speak directly to current retailer demands. These include the following:

About the Survey: Available as a PDF download, the study involved RFID/EPC decision makers from major manufacturers in the United States and Europe, particularly the United Kingdom, Germany, and France. A total of 80 companies were interviewed by telephone in April 2004.

Looking for automation solutions for packaging and palletizing? This is your destination for all things cobot. Whether it’s webinars, video case studies or product information, you’ll find it all in this one spot.
Aug 31st, 2020
Coding, printing & labeling