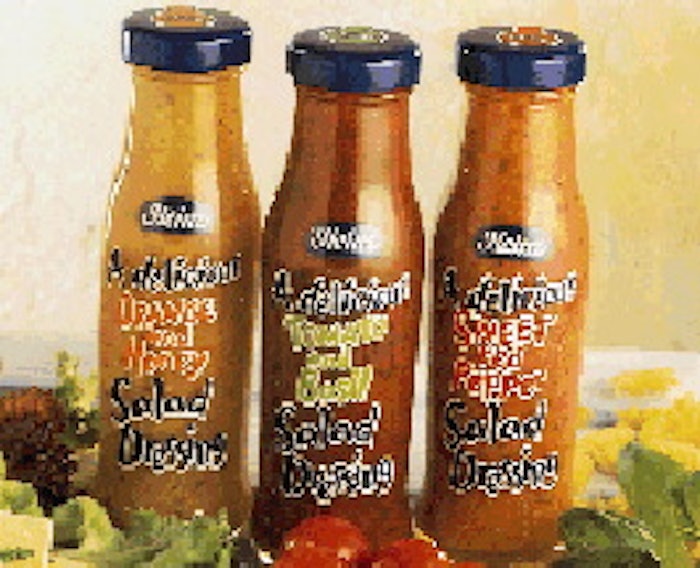 Yet the distinctive Heinz Salad Cream bottle is what Heinz used to launch its new Delicious line. Heinz' Emma Barry explains the strategy. "Since Heinz has such a heritage in the salad dressings market, but through Salad Cream only, we decided this bottle would lend credibility. It has the Heinz Salad Cream 'icon' shape and is instantly recognized as such," even when it contains a dressing that is decidedly unlike salad cream. To enable consumers to try the new dressings affordably, Heinz chose a small 200-g (7 oz) bottle supplied by United Glass (Herts, UK). This allowed a price point of just 89 p (about $1.50 U.S). Package graphics were designed by The Connection (Maldenhead, Berkshire, England). "'Bistro'-style graphics," says Barry, "were felt to be unique but still accessible to the target market." United Glass subsidiary Premier Glass (Cumbernauld, Scotland) executes the applied ceramic labeling. CMB Closures (Dorset, England) provides the 38-mm steel twist-off closures. The line reached British retail stores this past summer, says Barry, and is doing very well. There are plans afoot to expand the line into Spain.