Fat in the fire

Food and Drug Administration considers food labeling and packaging changes to highlight the dangers of obesity. 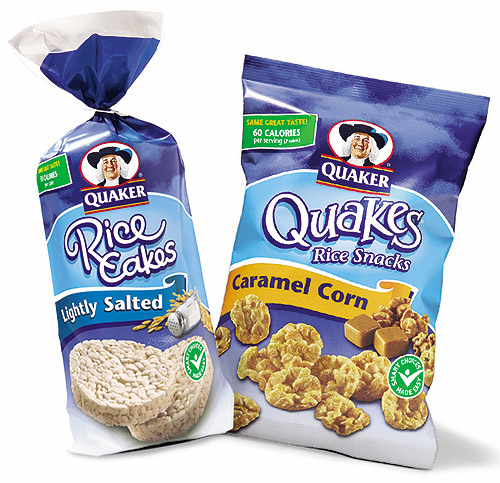 Violators (upper left) on these packages from Frito-Lay show the calorie content for these Quaker products.

The Food and Drug Administration (FDA) is starting to burn considerable bureaucratic calories on an initial regulatory action that would eventually require changes in how calories and serving sizes are listed on food product labels and packages. But the FDA effort, announced in early April, has food companies doing a slow burn of a different sort.

Regina Hildwine, senior director of food labeling and standards at the National Food Processors Assn. (NFPA), complained: “We in the food industry are in the middle of changing labels having to do with the listing of trans fats. We are not eager to change labels every couple of years. The FDA needs to be more deliberative on calories.”

Not only are food companies unenthusiastic about the FDA possibly dictating changes on how calories are listed on a product label or packaging, they also have differences of opinion among them on the importance of making calorie declarations more prominent. “There is some level of disagreement among individual companies,” notes Hildwine.

In fact, the two advance notices of proposed rulemaking the FDA issued in April are so controversial that food packagers are refusing to comment on them. Spokesmen for companies such as ConAgra, Kraft, Frito-Lay, and Unilever USA—all of whom, by the way, are pressing the FDA to allow nutrition statements about carbohydrates on packages—declined to discuss possible changes in calorie listing rules.

The fissures in the food packaging industry over the importance and need for more prominent calorie disclosure and more accurate listings of serving size are reflected in the press release Kraft Foods, Inc., Northfield, IL, issued a couple days after the FDA published its two ANPRs in April. The Kraft press release trumpeted Kraft-funded research that showed people would have more success losing weight if they focused on changing the types of food they ate, not by counting calories and eating smaller portions. It is the South Beach Diet ethic.

Kraft’s underlying message—one that many food companies are propounding via reformulated products and packaging—is that people are apt to lose more weight if they change the type and amount of carbohydrates they eat and replace refined grains with the slower-digesting and more nutrient-rich whole grains and focus on lean sources of protein.

The products were reformulated ostensibly to address some of parents’ concerns about fat, sugar, and artificial ingredients. Packaged in new single-serving packages, each snack variety is made with three grams of whole grain, has no more than three grams of total fat (with low to no saturated fat), and contains 100 calories.

But other companies are accompanying announcements of repackaging projects with statements critical of unspecified “fad diets.” Unlike Kraft, they are instead calling attention to calories on package fronts and changing labels to include nutrition information for both individual servings and the entire package. “We do think calories are important,” says Charles Nicolas, spokesman for Frito-Lay, Plano, TX, a division of PepsiCo, Inc.

On the same day the FDA was issuing its two ANPRs, Frito-Lay announced a repackaging for three separate lines of its Quaker-brand rice snacks. For the first time, the front panels of the packages of Quaker Rice Cakes, Quaker Quakes Rice Snacks, and Quaker Soy Crisps disclose the calories per serving.

The FDA is still a long way from dictating that all food companies follow Quaker’s lead. The ANPRs it issued on April 1 make no specific proposals; instead, they raise a series of questions on calorie disclosure and serving size determination that flow from recommendations issued by the FDA Obesity Work Group (OWG). Its final report stated weight control is primarily a function of the balance of calories eaten and calories expended.

The OWG recommended that FDA: (1) develop options for revising or adding caloric and other nutrition information on food packaging, (2) obtain information on the effectiveness of these options in affecting consumer understanding and behavior relevant to caloric intake, and (3) evaluate this information to make evidence-based decisions on which options to pursue.

The OWG also pointed out that the serving sizes the agency established in the early 1990s are, in many instances, out of date. Serving size is expressed as some percentage—usually 150% or 200%—of “reference amounts customarily consumed per eating occasion” (RACCs) for 129 food product categories representing the general food supply and 11 separate categories for infant and toddler foods. Many confusing provisions exist in the current law about how a manufacturer must compute serving size, and frequently considerable latitude is allowed.

The bottom line (pun intended) is that the serving size noted on many food labels is often smaller than the volume of that product a consumer typically eats in one sitting. Thus, people often consume more calories than they expected to.

For example, the RACC for carbonated beverages is eight fluid ounces. Soft drink packages of 12 fl oz or less must be labeled as a single serving. Containers of 16 fl oz may be labeled as a single serving or as “about two” servings per container. For products packaged and sold individually that contain 200% or more of the RACC, it is the manufacturer’s option to label the product as a single-serving container if the entire contents of the package can reasonably be consumed at a single-eating occasion.

The FDA’s concern is that a 16 oz or 20 oz soft drink is a de facto single serving as of 2005, and its label perhaps should list the calories per 16 oz or 20 oz, not per 12 oz. Some companies have already started to drift in the direction the FDA apparently wants the industry to move.

Jared Dougherty, a spokesman for Frito-Lay, says, “We are following all labeling guidelines to label products as a single serve for packages up to two servings. Pepsi-Cola has announced that it will begin dual labeling of the single-serve and total-package nutrition information for packages up to three servings. At Frito-Lay, we are working on a guideline along the same line as set by Pepsi-Cola.”

Changes like those being made by Pepsi will make any final, new FDA dictates a little bit easier for those companies to swallow. But for the food industry as a whole, the FDA regulatory process alone—never mind any final rules, which won’t come out for years—is going to cause considerable indigestion.