Thomas Tunnock Limited, commonly known as Tunnock’s, is a family-owned baking business based in Uddingston, near Glasgow, Scotland. Founded in 1890 by Thomas Tunnock, the company is now one of the region’s largest employers and is renowned in the U.K. for its caramel wafer biscuits and teacakes.

Sir Boyd Tunnock, the 86-year-old Chairman and CEO of Tunnock’s and the grandson of Thomas Tunnock, sets high standards not only for the manufacturing of the company’s products, but also for the packaging of the products. In 2017, due to a steady growth in demand for its caramel wafers, Tunnock’s decided to invest in an additional production and packaging line to increase its output. Having worked with Syntegon, formerly Bosch Packaging Technology, for decades, Sir Boyd Tunnock turned to the equipment supplier to provide the needed packaging equipment.

Says Tunnock, “As quality and reliability are of highest importance to me, I always buy the best equipment. I am happy with my Syntegon packaging lines, and that’s why I asked them to suggest a solution for our new caramel wafer line.”

One of the requirements for the new line was that it have a smaller footprint than Tunnock’s existing equipment, due to limited space in a new packaging hall. In addition, machinery on the line had to be easy to operate, clean, and maintain for fast changeovers.

Buffer, linear motor ensure constant product flow
Tunnock’s Real Milk Chocolate Caramel Wafer Biscuits come in one size: 94 mm W x 29 mm W x 20 mm high. Packaging of the product on the line takes place after the caramel wafers are enrobed in chocolate and then cooled to an appropriate temperature so they can be automatically handled and packaged.

Once on the packaging line, the wafers are transported to a 90-degree-angled infeed conveyor and are passed on to a row aligner downstream. Here, rows are accurately aligned before moving on to the infeed of the DFR buffer. The rows are then accelerated to the required speed for loading onto gondola shelves within the buffer. Misaligned rows are rejected beforehand by way of a pull-nose dump and a lateral reject conveyor. Suitable product rows are passed on to the shelves of the buffer’s gondola and move through the buffer to the discharge zone. Here, the rows are discharged on a first-in-first-out basis on two levels to the infeeds of the two wrapping legs.

Should either or both of the downstream legs stop running, the buffer will start to accumulate rows of products by moving the two triple carriages down. This increases the percentage of filled gondolas within the DFR buffer. Once the interruption is remedied, the downstream legs speed up to empty the buffer as quickly as possible. The DFR can accumulate products for up to 12 minutes.

In the first step, the wafers are wrapped singly in aluminum by the DPN7 die-fold wrapping machine at speeds to 400 packs/min. After wrapping, the packs are discharged crosswise and evenly spaced onto the infeed of the Sigpack HCM multipack flow-wrapping machine.

One of the reasons Syntegon says Tunnock’s chose the HCM was the machine’s FIT infeed system, which uses Beckhoff XTS linear motors, rather than a traditional infeed with chains, to assemble group packs. This vacuum-free technology provides gentle handling for the wrapped wafers to protect the products. It also enables a fast and continuous flow of product within the machine, where the packs are collated into groups of four, five, six, or eight. After collation, movers emerge in the appropriate gap and push the groups to the HCM wrappers.

Syntegon adds that the XTS linear motor technology also enables format changes at the push of a button, without the need to use tools or to add or remove lugs. In addition, the machine supplier notes that continuous production is also aided by fast and safe film reel changes, which are enabled by automatic film splicing.

After multipacking, the flow-wrapped packs are transported in two streams from the two flow wrappers into one Sigpack TTMC case packer. The TTMC is based on Syntegon’s TTM platform, which Syntegon says was engineered for extreme flexibility for different formats and pack styles and offers a high degree of process safety.

On Tunnock’s caramel wafer line, the TTMC uses  two parallel infeed chains to index the multipacks into batches on edge before they are pushed out into a joint collating unit that forms and compresses rows of multipacks on edge. The collated rows of packs are then lifted by an overhead robot and are top loaded into an erected RSC case. Tunnock’s uses three case sizes, which hold 20-, 30-, and 40-ct multipacks of product. Once a case is full, it is transported out of the TTMC and passes through an integrated taper that closes and tapes the top flaps of the case.

Designed for easy, tool-less changeover, the TTMC has lightweight, pre-formatted changeparts that are easily locked and unlocked to ensure the complete reproducibility of settings. Explains Syntegon Sales Manager Meyrick Hilton Long, “All of the components that have to be exchanged during a changeover are designed in a way that one person can handle them and do the format changeover in a very short time.”

Installed in June 2018, the new, two-leg packaging line has an overall footprint that is four meters, or approximately 13 ft, smaller than Tunnock’s existing lines. Says Tunnock’s Project Manager Stuart Loudon, “The new Syntegon packaging line is very compact. It saves us valuable floor space and achieves excellent efficiency results at maximum flexibility. The machines are easy to operate, easy to clean, and easy to maintain, which helps us to achieve a continuous product flow.”

Along with the new line, Tunnock’s decided to take advantage of Syntegon’s training package for their operators and maintenance staff. Through a combined classroom and practical machine training program, Tunnock’s employees learned how to maintain and adjust the new equipment. In addition to the training course, Syntegon also provides support through its U.K. service hub in Derby, England. “After the installation, the support has always been very good as we worked very closely with the Syntegon experts. This is beneficial for both Syntegon and ourselves,” Loudon says.

After several months of operation, Tunnock’s found that the production levels on the new line—at 650 packs/min—repeatedly exceeded those achieved on its existing lines. “With the new line having the intelligent infeed system, we expect to generate a fast return on investment based on increased efficiency, quicker changeover times, and reduced maintenance costs,” says Bill Gow, Financial Director at Tunnock’s.

And the joint projects between Tunnock’s and Syntegon are not over yet. Sir Boyd Tunnock has decided to invest in two more Syntegon machines to assist in the company’s growth. “We are keen to take our production to the next level,” he explains. “Knowing each other’s business for more than 25 years is a great advantage and translates into an open and trustful business and personal relationship.” 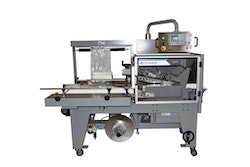