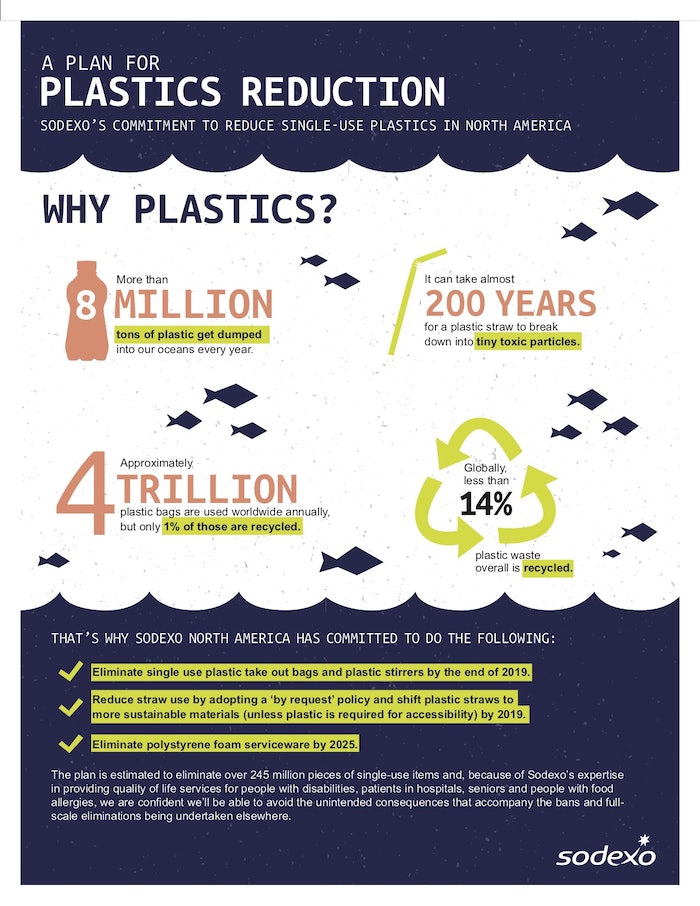 Foodservice company Sodexo has launched its North American Single Use Plastics Reduction Plan, created to eliminate single-use plastic bags and stirrers from its 13,000 universities, workplaces, hospitals, schools, stadiums, and other venues by 2019. The company will also eliminate expanded polystyrene items such as cups, lids, and food containers by 2025, and make straws available only for those who need them by 2019, while moving toward more sustainable materials.

Sodexo states that its plan will eliminate 245 million pieces of single-use plastic items. The company says it is committed to seek innovative practices and products to further reduce single-use plastics and will invest in solutions that involve reuse and not just other throwaway items.

In response to Sodexo’s news, Greenpeace Oceans Campaign Director John Hocevar says, “Sodexo’s comprehensive plan to reduce its reliance on single-use plastic will have major benefits for the environment and human health. Eliminating Styrofoam is a huge step forward. We also applaud Sodexo for committing to invest in solutions that involve reuse and not just other throwaway items.

“Foodservice companies have started to answer their customers’ calls for strong action on single-use plastics. It’s time for Compass Group, Sysco, US Foods, and other key foodservice companies, along with retailers and large fast-moving consumer goods companies, to show the same urgency to reduce their plastic footprints. Recycling alone will never solve the plastic pollution crisis—it’s going to require immediate reductions in the amount of plastic that is produced and sold.”

Cruz Foam, a bio-benign foam and plastic packaging alternative provider, was awarded a $1 million in non-dilutive funding with an NSF SBIR Phase II Grant in support of the development of its patented sustainable packaging material.
Cruz Foam
May 19th, 2021
More in Sustainability