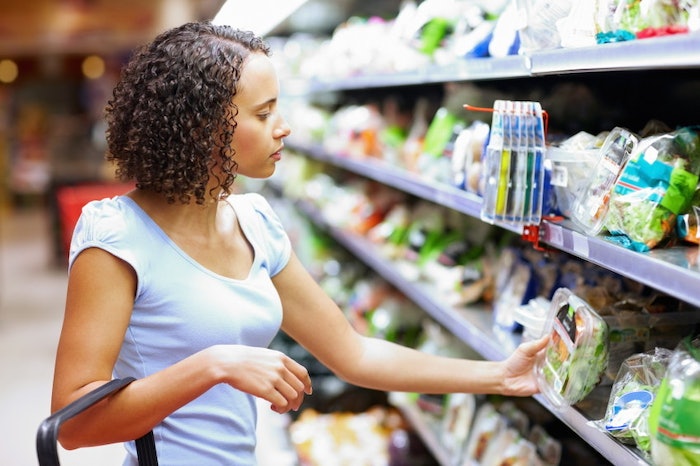 In the most recent research conducted by Perception Research Services, shoppers demonstrated that they are interested in choosing environmentally friendly packaging. Significantly more shoppers stated they would like to choose environmentally friendly packaging compared to 2010 (36% vs. 28%), with fully half still willing to pay more (despite the economy). This is especially true of younger (under 40) shoppers. Over half (59%) of the sample stated that seeing environmental claims on packaging positively impacts their behavior to either buy more of the brands they usually do, or switch to others.

Importantly, fewer shoppers feel that manufacturers’ motives are primarily honorable (57% vs. 61%). Shoppers are becoming more skeptical of manufacturers’ behaviors and motives in this area, as more stated that companies are increasingly self-serving (enhance reputation; realize profit gains) and show less concern for the environment.

Recycling-related claims carry the most impact
Of the various claims seen, those having to do with recycling (recyclable, made from recycled material, etc.) are both noticed most and have the most impact on buying behavior. Conversely, made with less material is less influential.

In 2011, Perception says it noticed a significant increase in shoppers checking to see if a package can be recycled prior to buying it. Since seeing environmental claims positively impacts purchase behavior, it is incumbent upon manufacturers to clearly convey this feature.

Fully two-thirds of shoppers indicate that they recycle on a regular basis. Those who do not recycle claim that the single biggest reason they don’t is that they forget to do so (44%), suggesting that messaging could serve as a useful reminder. This could also help bridge the gap between shoppers’ stated concern for the environment (66% very/somewhat concerned) and their level of activity regarding the environment (46% very/somewhat active).

“We’re seeing a great opportunity for manufacturers to provide truly value-added packaging to their target shoppers by making it more environmentally friendly—primarily in the form of recyclability and recycled content—and clearly communicating these aspects. We have seen that it is vital to get both the message right (what is said) as well as the delivery (how it is executed on pack), because one without the other will create a missed opportunity,” says Jonathan Asher, executive vice president at Perception. In addition, it is becoming apparent that the days of disguising cost reductions (e.g., smaller, thinner packages) as being driven by environmental concerns may be coming to an end, and continuing to do so may test shoppers’ good will.”