At a noon Media Luncheon in the McCormick Place Lakeside Center, the producers of ProFood Tech described Day One of the brand new ProFood Tech as a fine day indeed. 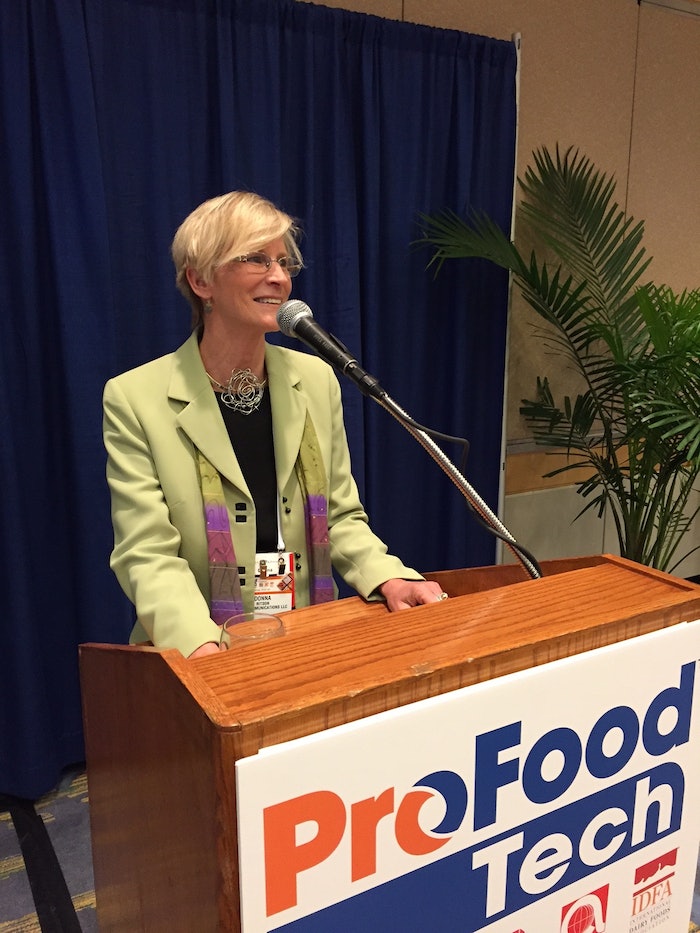 ProFood Tech, a brand new show running April 4-6 at Chicago’s McCormick Place, drew 441 exhibitors and occupied more than 140,000 net square feet, said PMMI’s Jim Pittas, Senior Vice President, at an April 4 Media Luncheon. “We had 4,000 pre-registrants and expect to see 6,000 total attendees by the time the show is over,” he added.

Joining Pittas in addressing the assembled media members were representatives from the other two heavy hitters who are producing the new show with PMMI: Neil Moran, Senior Vice President Finance and Administration and Trade Show at the International Dairy Foods Association, and Gerald Bose, President and Chief Executive Officer of Koelnmesse GmbH.

Also on the program was Donna Ritson, President of DDR Communications LLC, who presented highlights of the 2017 Trends in Food Processing Operation Report, released by PMMI in February 2017. Among the trends she mentioned:

• Snacking is on the rise, but consumers don’t only want convenience in the snack foods they purchase, they also want these foods to be healthful and delivered in sustainable packaging.

• “Give us more shelf life,” say food manufacturers, especially those in meat, seafood, and poultry.

• Half of the food processors interviewed in the nine industries covered in the report say that they have increased budgets for automation solutions.

• A convergence of processing and packaging departments in food manufacturing companies is making itself felt, and this is having an impact not only in how capital investment in packaging machinery is made but also in how the packaging lines themselves are managed and run.

• Food manufacturers are bringing packaging machinery OEMs into projects earlier than ever before. “The OEMs are at the table during the brainstorm sessions,” said Riston.

• Smaller batch runs are increasingly popular, oftentimes in test quantities. This is bringing an increased reliance on contract manufacturing and contract packaging providers.

• Metrics like Total Cost of Ownership and Overall Equipment Effectiveness are both in demand, and food manufacturers want both. Also, focus on operator safety has never been higher.

• The Industrial Internet of Things is coming into its own, and it’s bringing efficiencies in maintenance, operational efficiencies, and personnel requirements.

After PACK EXPO Las Vegas 2021 led the way in bringing the industry together, PACK EXPO East returns to Philadelphia (Mar. 21 to 23) looking to build off of its largest show ever in 2020.
Sean Riley
Dec 14th, 2021

Packaging and processing community ready to reconvene in Las Vegas for first time in over 18 months.
Sep 21st, 2021
More in PMMI news