When Chuck Yuska decided in 2017 that it was time to hand the reins of PMMI over to Jim Pittas and spend more time with his grandkids, he closed the book on 27 years as one of the most visible and influential figures in the packaging industry. 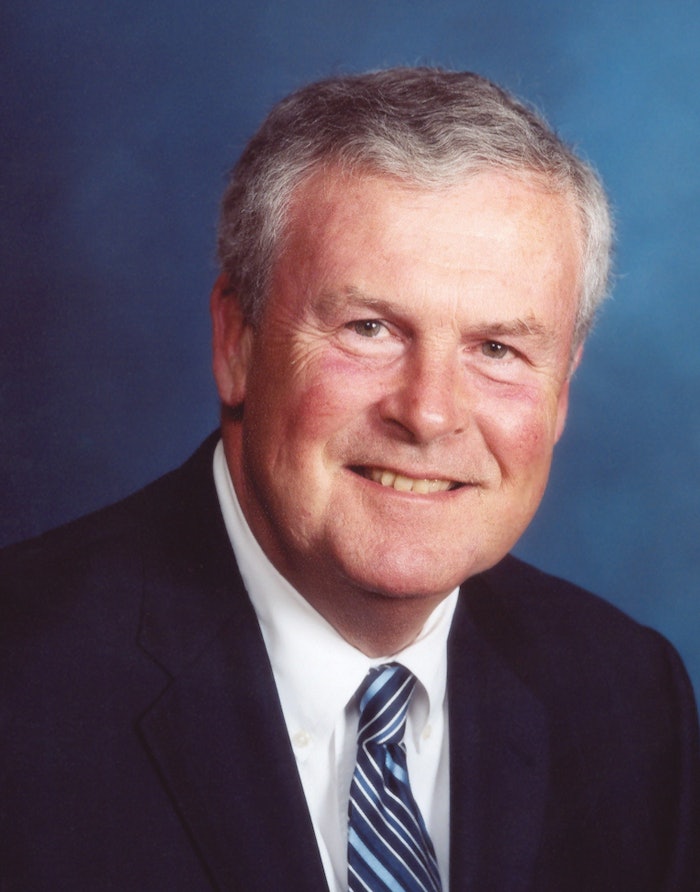 Anyone who has watched Yuska feted with appreciation for the mark he left has also witnessed his large presence genuinely humbled by all of the attention and admiration. His induction into the Packaging & Processing Hall of Fame provides one last opportunity for him to deflect and credit his staff and family for most of his success.

In 1990, the Packaging Machinery Manufacturers Institute tapped Yuska to lead its association of American packaging machinery manufacturers. From its humble office in downtown Washington, Yuska saw potential beyond a trade association and its biannual PACK EXPO International trade show.

Because PACK EXPO International was such a successful endeavor, he believed it could help create and sustain a number of initiatives to promote membership and the industry. Throughout his tenure, the number of shows increased not only to expand the trade show business, but also to raise money for scholarships, education, workforce development, industry relations, and business intelligence.

Not content to remain the preeminent packaging trade organization in the U.S., PMMI, under Yuska’s leadership, recognized the benefits of a true North American association. Within five years, PMMI opened a Latin American office in Mexico City, acquired 50% of EXPO PACK México, opened membership to Canadian companies, and launched a second U.S. trade show: PACK EXPO Las Vegas. What began in 1995 as a regional show serving the West Coast now serves the packaging community as the second largest trade show in North America behind only PACK EXPO International.

From 2003 until his retirement, Yuska truly ramped up PMMI’s influence south of the border, acquiring full ownership of EXPO PACK México, creating an additional show for the Latin American audience with EXPO PACK Guadalajara, and opening membership up to Mexican companies. Like Las Vegas in the U.S., Guadalajara initially began as a regional trade show, quickly growing large enough to serve as the main EXPO PACK exposition in odd numbered years. Yuska and PMMI were not finished with the regional trade show market, however, creating the wildly successful PACK EXPO East in Philadelphia, which wrapped up its third and most comprehensive show to date earlier this spring.

While expanding across North America was a priority, so too was Yuska’s desire to extend PMMI beyond the current packaging landscape. The PMMI Foundation has contributed millions of dollars toward education and scholarships for the future of the industry, and throughout Yuska’s tenure, PMMI opened membership to include processing machinery, components, materials, etc. In 2016, after 80 years, PMMI became a complete association of the packaging and processing industry when it updated its bylaws to welcome all qualified companies that manufacture or assemble in North America as well as suppliers to the packaging and processing industry that do not supply components for the building of machinery. The following year, PMMI added yet another trade show when ProFood Tech debuted in Chicago.

In 27 years, with Yuska at the helm, PMMI grew from less than 300 members to nearly 850 members and its trade show portfolio expanded to six. In 2003, PMMI created its own successful packaging publication Packaging Machinery Technology that served the industry as a thought leader until PMMI made the bold decision to acquire Summit Media Group and Packaging World magazine. The acquisition sent shockwaves through both packaging and the media, but now, PMMI Media Group has emerged as a natural expansion of the PMMI brand. PMMI Media Group further cemented PMMI as a real hub of the packaging and processing industry.

In 2001, PACK EXPO Las Vegas was entering its second day on Sept. 11, when the world changed forever. After much discussion, Yuska urged the PMMI Board of Directors to keep the show open because he recognized the industry would need a place to come together. A community isolated from their families in Las Vegas, with no way of getting home, needed to grieve together and to try and understand what was happening. He put large-screen TVs around the Las Vegas Convention Center so that everyone could follow the news—together. He made sure that the industry had each other to lean on during that terrible time.

The Packaging & Processing Hall of Fame will welcome all five new members as its 45th class at PACK EXPO International 2018 (Oct. 14–17 ; McCormick Place, Chicago), according to Hall of Fame coordinator and show producer PMMI, The Association for Packaging and Processing Technologies. This year’s other inductees are Michael Okoroafor, Timothy Bohrer, Keith Pearson and Susan Selke. Read short snippets about the other inductees by clicking here, or read their full profiles, to be posted individually in coming days, by clicking here.