It can outwardly appear to be a zero-sum game of competing goals. But brand owners, machine builders, and controls suppliers pulled the curtain back on they realities they face and the masters they serve in a play to work better together. 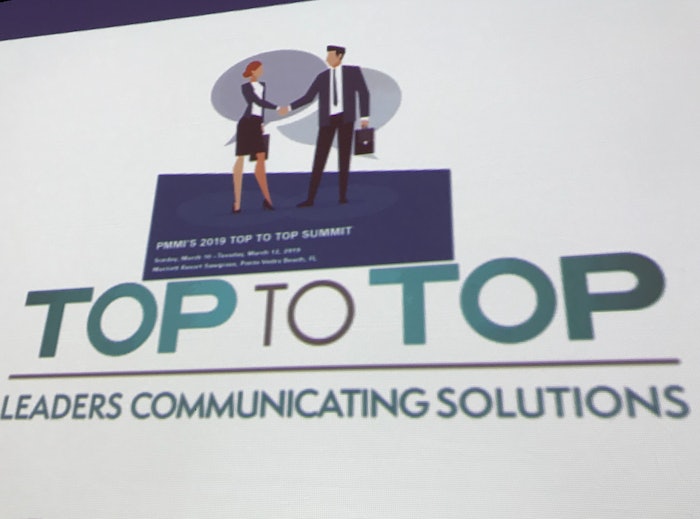 Last week at the Top to Top Summit, where CPGs and OEMs come together to solve pressing manufacturing problems, a panel of buyers and sellers of packaging machinery, including the components and controls that constitute them, tackled the thorny issue of obsolescence.

Drive that car into the ground
One prominent food manufacturer said to a cacophony of chuckles: “OEMs, if you want to find a piece of equipment that's 10 years old in one of our production facilities, you walk into a plant and ask to see the ‘new’ line.”

The food manufacturer said that, at least financially speaking, he would love to run obsolete equipment. Packaging equipment is typically depreciated on a seven-year curve at his facility. That means that for seven years on any P&L [profits and losses] statement, a manufacturer is putting 10-20¢ of cost against every case it produces to pay for the equipment asset.

“You hit year eight, year nine, and year 10, your profitability on that same case of product becomes 10 cents higher,” the food manufacturer said. “You haven't broken market share, you haven't changed ingredients, you're just making more profit simply because the depreciation curve has run out.”

This puts potential OEM suppliers in a tough spot, even on year 12, year 15, or year 20 of that equipment’s life. The trick is trying to justify putting a new piece of capital in play even though it's going to hurt the margin on that business.

“What we run into is, as an overall strategy, the C-suite wants to run as long as we can,” he said. “In our day to day lives we don't do P&L accounting, we do cash flow accounting. But if you buy a car on a loan, those first four, five, six years, when it's on that loan, are painful. But then you hit year six, year seven, and if it's a good car and it's got a fairly low amount of mileage on it, you're feeling pretty good for the next couple of years.”

But the food manufacturer described an opening for OEMs and the CPG plant engineers and operators that are often in their corner. When the older car’s odometer starts ticking up higher and higher, the owner will start to get nervous. Ultimately, the tightrope for brand owners and food manufacturers to walk is to maximize the length of time they’re going to run an asset in their plants. But there are three primary opportunities for OEMs when CPGs will be receptive. The the third is most common, albeit tricker, than the others:

Controls obsolescence a focus
The controls and electrical side of the obsolescence curve is what really comes to focus for one large brand owner speaking on the panel. Comparatively, on the mechanical or machine side, reverse engineering and fabricating parts is easy enough with the resources the company has at its fingertips, so parts unavailability isn’t much of an issue.

He went on to group the controls and electrical componentry into three buckets:

Of those categories PLC controls on his systems are starting to come of age—a significant amount of those components will need to be addressed and replaced soon.

“How do you replace them? Do you replace them in kind? Can you afford to replace them without changing the equipment and process systems that may be the path when it's a single unit operation,” he asks. “If you touch the controls then you have to talk about controls, safety integration, safety upgrades, and more. That's where a lot of our focus is, especially in how to map out our plan going forward.”

Meanwhile, the shift away from PLCs and toward PC and Windows style controls platforms is on the horizon for this brand owner.

“This is especially true of a components that are licensed out to communicate with certain devices, rather than a mechanical part that we can reverse engineer or replace,” the supplier said. “Anytime there is an obsolescence, it becomes economy of scale. The technology is growing old, the products have been converted, revamped into newer technology, and therefore the economy to scale said you're not building 10000 a month, you're building three a month.”

When that’s the case, it becomes very expensive for the licensor of that sub-component to continue to build them. And if the licensor obsoletes that licensed component, any controls product that uses that technology is, often, automatically obsolete as well.

“Our biggest concern is the part that we can't control, which is the third-party license components that we have to purchase in order to complete the full system,” he said. “That's something we try and keep a close eye on from an engineering perspective. We try to understand where the business is going, where the technology is going, what the obsolescence plan is from some of those other third-party manufacturers, what they're seeing, when they think the technology is going to run its course and evolve into a new product.”

OEM floats a retainer strategy
“My company doesn't have an obsolescence strategy,” one OEM said. “We seem to keep every piece of old capital equipment around for the contingency that we're going to need it all once at some point in time.”

But realistically, this isn’t practical for most, nay, any machine builders. Inventory for spares is hardly limitless, and machines last 20-plus years in the field. Many OEMs lose sight of significant portions of their installed base, only to hear from a third owner two decades later. Plus, considering the aforementioned third-party obsolescence issues that machine builders’ controls vendor partners experience, it’s the rare OEM that can guarantee parts forever.

So this OEM suggested that CPGs get some skin in the game by taking on some of the burden for guaranteed aftermarket parts to keep a machine running well beyond the depreciation cycle. The keyword here was ‘retainer.’ If an OEM is asked to be on call for a CPG with spares to extend the life of machines and push obsolescence dates out as long as possible, they could be asked to be partners in the endeavor.

Another value of having the OEM formally retained might be the OEMs ability to help operations folks or plant engineers ‘sell up,’ the need for machine replacement. This can be vital in those difficult situations where the ROI is not obvious, like the food manufacturer already described.

“There’s an amazing lack of urgency when a machine is running fine. Procurement’s first tactic is to delay obsolescence—they think it’s running fine now, and there’s no urgency to change before a disaster happens” an audience member pointed out. “Having the OEM on our side to help really bear out the case for planned obsolescence, and bake it into the machine’s life, will help lend credibility to the plant operator who is faced with downtime, like the owner of a car with a lot of miles on it.”

As for anything less than a full machine replacement via plan for obsolescence? Do it on the sly, suggested one brand owner, also in the audience.

“Replace controls systems as part of maintenance and upgrades, and have your OEMs and even their suppliers get involved in making the case for placing controls soundly in the M&R category since obsolescence is a dirty word to procurement,” he said.