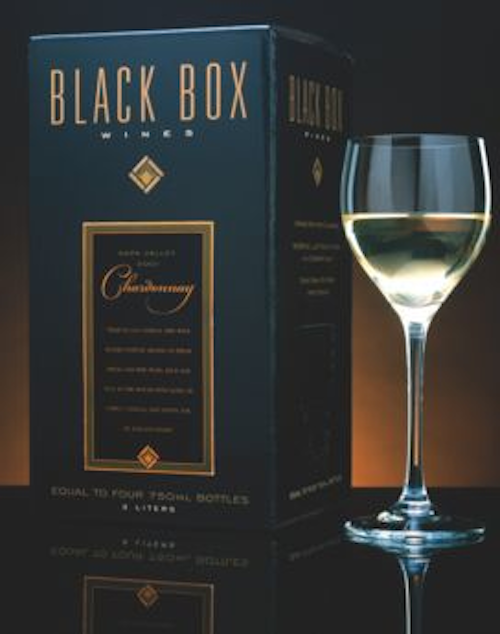 Black Box Wine's 3-L \"tower\" shape is unique among bag-in-box wines. More varietals have been added to the Chardonnay, which

"Our goal is to help bring fine wine into mainstream America by making quality wine affordable and convenient," says Black Box founder and president Ryan Sproule. "High-end boxed wine has been popular in Europe and Australia for years. We are challenging the wine industry and changing the way Americans feel about boxed wine."

The bag and integrated fitment are from Scholle, the box from Color-Box. The 3-L B-I-B holds the equivalent of four 750-mL bottles of wine. The suggested retail price is $25, $6.25 per bottle.

"If bottled, the wine would retail for about twice that price," says Sproule. "Our savings on bottles, shipping, and storage allow for a very nice price break that we pass along to the consumer."

Another B-I-B advantage is in maintaining freshness longer after opening. The barrier, nitrogen-flushed bag inside the box prevents oxidation, which normally spoils a bottled wine a few days after opening.

"Even after the box is opened, there is no new oxygen introduced into the package," Sproule says, pointing out that oxidation is especially noticeable in a premium wine. "The wine will stay fresh up to four weeks after opening as the bag collapses." He says that’s a big selling point, especially with single professional women who enjoy wine, but have been reluctant to open a bottle. Unopened, the product shelf life is nine months, he adds.

Scholle's DuraShield™ 45 bag, a 4.1-mil bag of polyethylene/nylon/5-layer coextrusion with ethylene vinyl alcohol barrier layer is provided with a Scholle FlexTap™ dispensing tap. The four-piece FlexTap, with a red push-button dispenser and 3/8'' orifice, is supplied fitted over a 1 1/4''-dia PE ring welded to the bag.

In an agreement made in August 2003, Sproule licenses the product to Pacific Wine Partners, which does the contract packaging and handles the products' distribution, sales and marketing. It is filled at PWP's Gonzales, CA, plant, on two leased Scholle AF-9 fillers. The semi-automatic machines fill five bags/min/machine.

The box is E-flute corrugated litho-laminated with six color printing. Graphics are from Cameron Design.

‘Riding the Wave – Adapting to the New World of Outsourcing’

Nutraceutical provider has quality in the bag (and bottle)

In the contract packaging environment, automation traditionally has not been an option. But as cobots become more affordable and easier to program, they offer a new opportunities.
Anne Marie Mohan
Apr 2nd, 2019

There is a “perfect storm” of market forces turning food and CPG manufacturers to CP/CM partners for product, process and external innovations. Consumer trends, sustainability, and new technologies are also drivers of this “new frontier.”
Kim Overstreet
Mar 28th, 2019

HPP paired with bottle filling proves to be a powerful combination

Dave Mabon of Ongoing Value thinks the many contract packagers that are capable of reverse logistics services, often simply by virtue of their software, are leaving money on the table by not advertising it as part of their value proposition.
Matt Reynolds
Feb 22nd, 2019

Generations are formed by economic, technological, and historical events that happen during formative years, and they create like-thinking cohorts. Awareness of the differences and similarities between them can inform how narrowly (or widely) you target with packaging design and messaging.
Matt Reynolds
Feb 21st, 2019