With the launch of its 3Q Sangiovese red Italian wine, Italian vineyard Cantina Goccia is the first to commercialize an innovative new paper bottle. 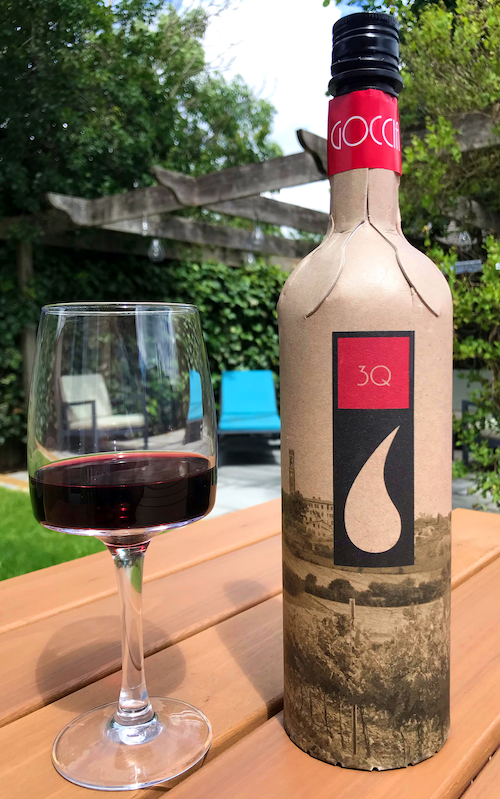 Weighing just 83 g, the paper bottle is up to five times lighter than a comparable glass bottle.

The 750-mL Frugal Bottle is made from 94% recycled paperboard that is assembled around a food-grade liner to hold the wine or spirit. The liner is described as similar to what might be used in a bag-in-box wine. The threaded closure is aluminum and the neck finish appears to be a rigid plastic.

The Frugal Bottle, which is comparable in cost to a labelled glass bottle, is the brainchild of British sustainable packaging firm Frugalpac, which creates and supplies recycled paper-based products with the lowest carbon footprint that are easily recycled again so they don’t need to go to landfill. The Frugal Bottles for this particular wine are made at Frugalpac’s facility in Ipswich, England, and sent to Cantina Goccia for filling. But Frugalpac’s long-term plan is to put bottle-making machines into wineries or into contract filling facilities where multiple wine brands are filled. One Frugalpac machine can produce 620 bottles/hr.

Presumably, the paperboard is fed into the bottle-making machine in the form of flat blanks already printed by a converter. Weighing just 83 g, the paper bottle is up to five times lighter than a comparable glass bottle.  An independent Life Cycle Analysis by Intertek found the bottle has a carbon footprint up to six times smaller than a glass bottle and more than a third less than a bottle made from 100% recycled plastic. Consumers can recycle it by separating the plastic liner from the paper bottle and putting both components in their proper recycling bins. Frugal Bottle also notes that the whole bottle can be put into the paper recycling bin and the liner will be easily separated in the re-pulping process. Using up to 77% less plastic than a plastic bottle, the Frugal Bottle also stands out because it allows for 360-degree branding across the entire bottle.

Go here to read about a flat wine bottle with a complementary case designed for e-commerce.

The Cantina Goccia Frugal Bottle will initially be available for purchase online from the winery and in Scotland from Woodwinters Wines & Whiskies retail stores and online. The Frugal Bottle is also under active consideration by a number of leading UK supermarket chains and hospitality groups keen to promote sustainable packaging. It will be available from other retail outlets across the UK, Denmark, and Holland over the next few weeks.

Ceri Parke, owner of Cantina Goccia, describes this container as “the most sustainable wine bottle in the world.” She continues: “The Frugal Bottle is about achieving a considerably more sustainable form of packaging for an industry crying out for innovation. When some of our top hotel customers saw samples of it, there was no hesitation in their minds that this type of bottle would be well received in their dining rooms. The launch of the Frugal Bottle is a big leap in sustainability without compromising wine quality. It’s much lighter than glass, easier to transport, and friendlier to the planet. Just as important, our wine still tastes as wonderful in a paper bottle as it does in glass. We passionately believe this is a real game changer for the wine industry, allowing us to sell and transport our award-winning wines in a much more sustainable way whilst still providing a beautiful bottle.”

This collaboration between academia and a major brand supports the development of technologies to identify and assess viable alternative materials that will reduce the environmental impact of packaging.
Matt Reynolds
Oct 1st, 2020

Bundaberg Brewed Drinks of Australia recently installed a Craftmate C canning line for its premium soft drinks such as ginger beer, which is exported to more than 60 countries.
Pat Reynolds
Oct 1st, 2020

Coca-Cola Delivers A European First with Recycled Paperboard Can Handle

I’ve always told anyone who would listen that the main reason I’ve so enjoyed being a packaging journalist for all these years is because my job consists of talking with some of the smartest problem solvers on the planet.
Pat Reynolds
Jul 22nd, 2020

Listening to the stakeholders behind this determined effort is a vivid reminder of how many factors must be weighed before a compostable film can be commercialized.
Pat Reynolds
Jul 21st, 2020

Nestlé and Starbucks have unveiled Starbucks® Fresh Brew, a range of pre-portioned coffee in an airtight can that locks in the peak flavor of ground coffee for fresh taste every time.
Pat Reynolds
Jul 20th, 2020

The webinar will be held Tuesday, Jun. 23 at 11 AM CST with speakers sharing examples and insight into how a new evolution of the supply chain is being forged under the pressure of the global COVID-19 pandemic.
Cold Chain Council
May 26th, 2020

Near-Term Technology Expansion in the Food and Beverage Industries

Remote access and robotics are two areas in the Food and Beverage industries that are poised to see some growth moving into 2021, though the industries as a whole are expected to contract.
Kim Overstreet
May 20th, 2020

Chad Buechel tapped to lead KanPak U.S., will be responsible for all aspects of the business
Morgan Smith
May 20th, 2020

CTI: Thermochromic Inks Free of Bisphenol A, F and S

Printable thermochromic technology for temperature monitoring is designed to meet the needs of pharmaceutical printers, as well as those in food and beverage.
Chromatic Technologies Inc.
May 14th, 2020

Europe vs. U.S.: How Consumers Are Spending Grocery Budgets During COVID-19

Stock availability has been a major challenge for retailers across America and the European continent during the pandemic, as many people can’t eat in restaurants and are stocking up a lot more than usual.
Joyce Fassl
May 14th, 2020

The global brewer will save cost-consuming trips and support sustainable service, while reducing time for equipment repairs and overall downtime.
Joyce Fassl
May 3rd, 2020