Atlanta-based Orpheus Brewing switched to WaveGrip carriers for their canned beers because they bring a reduced manufacturing footprint while also reducing costs and bringing ease-of-storage benefits. 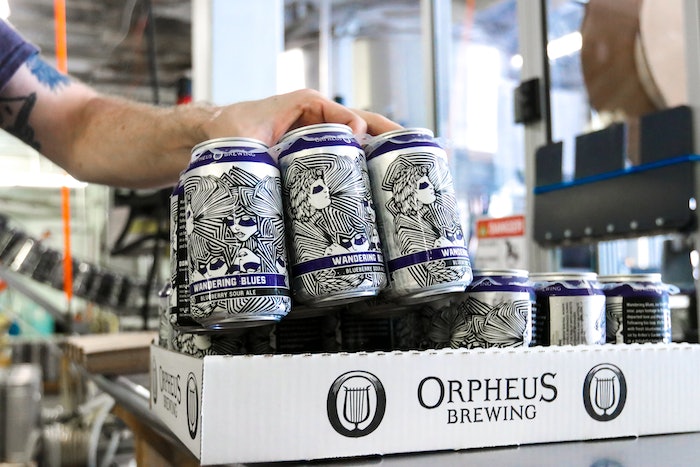 Now the brewery is establishing a carrier return plan to help further reduce their packaging waste. Assisting is WaveGrip, a company of Berry Global.

Opened in 2014 and based in Atlanta, Georgia, Orpheus brewing operates a 20BBL, 16,000 sq ft brew house and tap room focusing on beers with drama and punch. With four core beers and an almost endless range of specials, Orpheus’s flavors range from tart sours to strong barrel-aged stouts.

WaveGrip carriers were the perfect choice for Orpheus. Weighing only 3.5 g for a standard 6-pack carrier, WaveGrip provides an 85% reduction in material usage when compared to HDPE plastic handles, and a 10% savings when compared to traditional ring carriers.Moreover, compared to HDPE carriers, WaveGrip allows for up to 370% more carriers per pallet, thereby reducing overall shipment costs as well as fuel consumption and the greenhouse gas footprint for the brewery.

WaveGrip carriers are recyclable, being made from LDPE. But the challenge remained to ensure that the carriers were collected for recycling. This, together with understanding the differences in recycling capabilities across states, led to the ‘Orpheus Carrier Recycle Program.’Orpheus drinkers can now return their used carriers to any of Orpheus’s taprooms and receive an incentive off future Orpheus beer purchases for their efforts. Once a sufficient number of carriers have been returned, they are collected in bulk by WaveGrip and recycled into a diverse range of products such as decking, road paving, or other types of packaging – or even more WaveGrip carriers. As part of the Berry Group, over 260,000 lbs. of plastic are currently recycled every year, minimizing waste and maximizing resources as part of the circular economy.

“The sustainability of WaveGrip was fundamental to our choice of carriers and has helped to significantly reduce our packaging usage,” comments Remco Bos, CEO of Orpheus Brewing.“The final part for us was ensuring that with its recyclability we could ensure that each WaveGrip carrier was not wasted. Our Carrier Recycle Program now delivers this, and by incentivizing our customers to return their carriers we have a win-win situation for both the environment and them.”