More and more food and beverage manufacturers are incorporating QR codes that give consumers background information on the product right at the supermarket shelf. 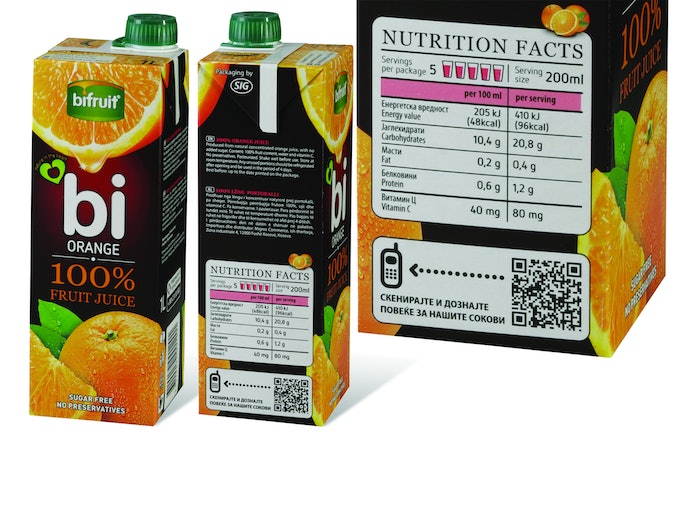 Macedonian food company Mlekara AD Bitola, for instance, is now using QR codes on the packaging of its 100% 'BiFruit' juices, which are packaged on SIG Combibloc systems. This QR code takes consumers via a direct digital link to a special website that provides recipes on how to make different seasonal cocktails.  It also has a link to BiFruit's Facebook page, where current news is presented on a rolling basis. Igor Ivanovski, Category Manager for juices at Mlekara AD Bitola adds: “The idea behind this technology is to make direct contact with consumers. We are interested in people, their needs and what they think. The link with social network is clear. The pages accessed via smartphones are designed to be compatible with mobile devices. This triangular approach (QR Codes – Smartphones – Socialmedia) funnels the power of all three communication tools into one condensed communication platform − allowing consumers access to all information at any one time.”

Spanish company J. García Carrión, another Sig Combibloc customer, is taking a similarly ambitious approach to QR codes. The codes, linking to a promotion with a competition and to the company's social media sites at Facebook, Twitter and the local Spanish portal 'tuenti', are printed on the company's 'Don Simon' juice range and on 'Frutas + Leche' ('Fruit + Milk') mixed drinks. Don José García Carrión, president and owner of J. García Carrión, says: “Surveys show that consumer interest in the mobile internet is growing. This applies above all to young consumers, and in respect of QR codes our main focus is currently on this target group. The codes on the packages open up a lot of new possibilities for addressing consumers within specific target groups.”

The symbiotic merging of the digital and the real worlds, as in a recent example from South Korea, is perhaps still a long way off for other parts of the world. A British retailer has mounted billboards on the walls of an underground train station, showing supermarket shelves tightly packed with actual-sized products – and has opened a virtual supermarket. Each product has a QR code, allowing passengers to shop online using their smartphones while they are waiting for a train. Consumers can also pay by mobile phone, and their groceries will be delivered to their door. Within just a few months, according to information provided by the retailer, sales through the online shop have increased by 130 per cent. Martin Herrenbrück, head of global marketing and business development at SIG Combibloc, says: “The use of smartphones as regular shopping companions is going to catch on at different speeds in different parts of the world. But according to forecasts by experts, if the current trend continues, within the next 20 to 30 months more mobile telephones will be connected to the internet than PCs. Compared to the domestic appliance industry, for instance, the food industry is still more reluctant to introduce QR codes. However, a step into the digital future can really be worth it – especially if you manage to achieve a 'first mover' effect in the market you are aiming for.”

An examination of legislation meant to boost demand for PCR reveals lawmakers are not considering the full implications of these requirements and the other industries that compete for demand.
Dan Felton
May 9th, 2022
More in Home