If you have ever wondered whether the milk in your grocer’s refrigerator might have gone bad or if you left the prepackaged meats on your kitchen counter too long, then a partnership between two University of Rhode Island chemistry professors and a food safety company will soon put you at ease.

Bar codes created by SIRA Technologies (www.siratechnologies.com) for use on refrigerated food products will incorporate an ink that will be rendered nearly invisible. When conditions indicative of contamination exist, the ink will turn red, and the bar code will be rendered incapable of transmitting data when scanned.

“We’ve all heard about people who have been sickened by contaminated food in recent years,” says Brett Lucht, who, along with colleague William Euler, developed the polymer that is added to the bar-code ink to make it change color. “Our partnership with SIRA Technologies is creating a smart packaging system that will prevent thousands of people from getting ill.”

The URI researchers began studying thermochromic pigments—those that change color at certain temperatures—a decade ago when a cookware company sought a polymer that could be added to its products to make them change color when they were too hot to touch.

The heat-sensitive material they developed turned from red to yellow at 180ºF (the temperature at which a person would suffer a burn) and back to red when it cooled. That polymer generated interest from more than 100 companies that sought to incorporate it into dozens of different materials, from specialty fabrics to healthcare products. None of the companies, however, were willing to incur the added costs of refining the polymer for their specific uses.

But when Lucht and Euler modified their discovery into an irreversible polymer—one that does not revert to its original color after changing—SIRA Technologies took notice.

Bob Goldsmith, SIRA Technologies CEO, says that the company had developed a bar code that could sequester pathogens from animal blood and quantify the colony of pathogens with colored organic beads until the color emerged to activate the bar code and report the contamination. However, constant pathogenic mutations made it impossible to keep current with marketplace needs. The company’s subsequent search for an irreversible thermochromic ink led them to partner with URI in what is now trademarked and patented as The Food Sentinel System.

A patent for URI’s thermochromic polymer was received in 2004, and additional patent applications are being pursued.

According to Lucht, other thermochromic indicators are commercially available, but they are expensive, and they lack the archival feature required by regulatory agencies to track and trace products on a global scale. They also rely on human examination to judge whether the product has been rendered unsafe for consumption.

The cost of the SIRA Technologies bar code with the URI polymer will be less than four cents each. 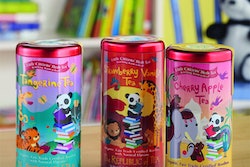 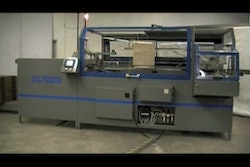 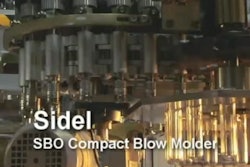 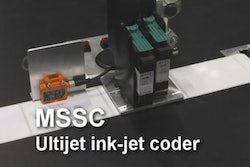 Flexibility is the foundation of new small-character ink-jet printer