A waste byproduct becomes a useful livestock feed for farmers by using a centrifugal sifter to dewater the stillage, the grain/water mixture stripped out after the fermentation process.

As Ryan DeHart and his wife Natasha rode the early wave of the craft boom—first as brewers and then as distillers—they aimed to set themselves apart from the rest of the pack. In their earlier days, rum was their differentiated craft product, but it meant an uphill battle of educating and converting what wasn’t a strong rum market in Texas. But once the whiskey, their true passion, had had time to age properly, they were on a new track.

Now that Bendt Distilling Co., based in Lewisville, Texas, has seven different handcrafted whiskeys in its portfolio, the company is bringing the art of blended whiskey to the U.S. It will require some education of this nascent market again, as more Americans come to understand what is possible in whiskey flavor profiles.

Bendt is also interested in helping its fellow small crafters understand the value of a distilling process that more efficiently turns spent grain byproduct into saleable livestock feed—not only making some profit from waste that had been previously difficult to give away, but also by better recovering the valuable liquid sour mash from the mix.

To make its whiskeys, Bendt grinds its grains—wheat, rye, barley malt, oats, corn and triticale—to the consistency of coarse flour, which is then mixed with water, cooked, mashed and fermented. After fermentation, the strip run (the first round of distillation) separates out the alcohol from the fermented mash. The remaining grain/water mixture (stillage) is primarily water with 5 to 10% grain solids.

Though still quite watery, the stillage contains enough grain and nutrients to be useful to farmers as livestock feed. Initially, Bendt was giving this stillage away simply to save on disposal costs. They would pump the stillage into 20-cubic-yard disposal containers, which the farmers would then have to forklift onto their trucks to haul away, returning the IBC totes after emptied.

“There was quite a bit of manual labor involved in that. And we were just giving it away to whoever would do it,” DeHart says. Sometimes farmers wouldn’t show up when scheduled—or at all, leaving Bendt with a container of stinking, molding stillage outside.

Reading about another distillery’s use of a centrifugal sifter to dewater stillage, DeHart decided to give that a try, contacting Kason, which ultimately recommended its model MO-3BRG Centri-Sifter for the job. Now the stillage accumulates in a 10,000-gallon holding tank, where it is then pumped into the centrifugal sifter about one a week. 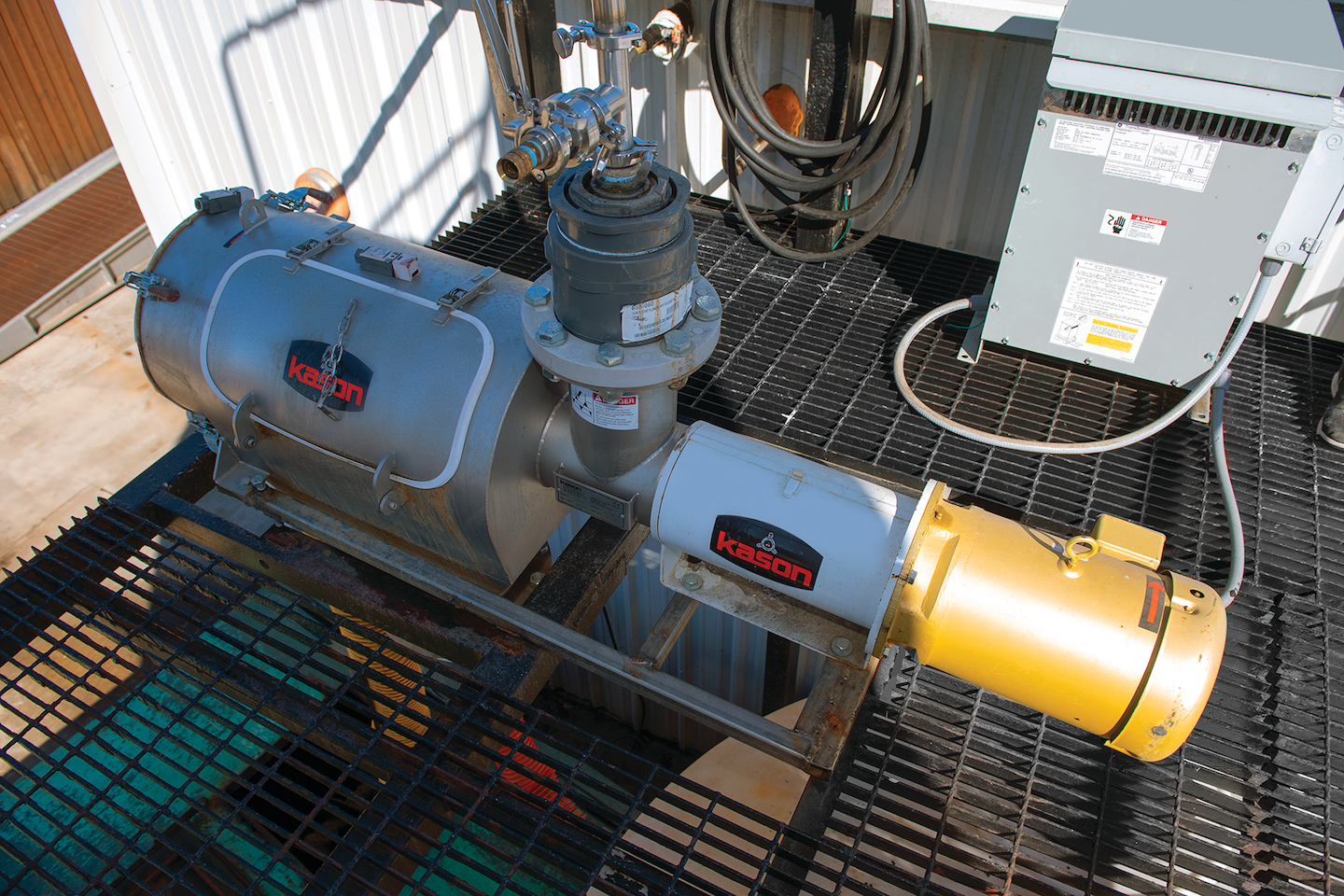 The Centri-Sifter centrifugal sifter at the distillery runs at a higher voltage than normal in order to screen heavy, sludgy stillage.Bendt Distilling Co.

Unlike brewers, which just crack the grains, grinding to a flour consistency allows distillers to extract more sugar from the grain. “So there’s benefit there. But then the challenge that you have on the backside is then how do you separate those solids from the liquid once you’re done with the distillation process,” DeHart explains. “The Kason lets us separate out a majority of the solid material from the liquid, which then allows us to stay with this higher-efficiency milling process.

The dewatered grain still contains about 80% water but “has a texture you can hold in your hand,” DeHart says. The resulting product is one that’s significantly more appealing to farmers so that Bendt has been able to establish a profit-sharing partnership with Wilbur-Ellis to provide the spent grain to its customer base of farmers. 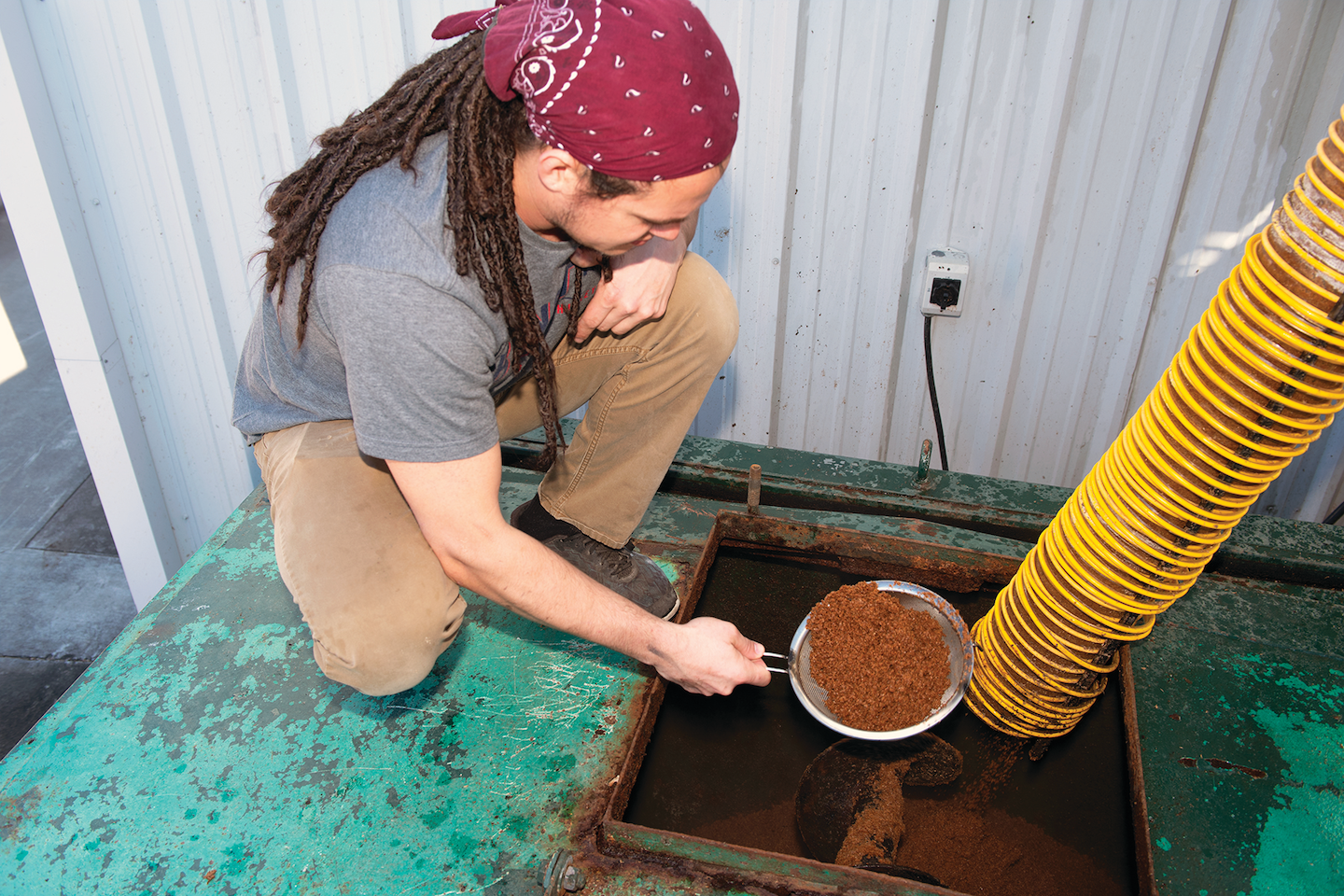 “So now, not only do we get paid for the spent grain, which is a nice benefit, but we're on a regular schedule,” DeHart says. “A truck comes and picks up the container, takes it to the farm. The whole process takes about four to five hours, and then we don't have to worry about somebody not showing up. The amount of labor that it takes on our side to process that is practically nothing at this point.”

When the stillage is pumped from the holding tank into the centrifugal sifter, it passes into the sifter’s horizontally oriented cylindrical screening chamber, where rotating helical paddles accelerate the mixture against the screen by centrifugal force. Liquid passes through the screen, exits through a flanged discharge chute at the base of the sifter and flows into discharge piping.

Oversize grain solids are propelled along the cylindrical housing until they exit the downstream end of the cylinder and gravity feed into a 20-cubic-yard enclosed container. The centrifugal sifter operates at a rate of 30-40 gal/min, so emptying the tank takes four to five hours.

There were some challenges that Bendt had to work through with Kason’s application engineers and with Tennant Specs, a local system integrator. For example, the sludgy consistency of the stillage at the bottom of the holding tank could cause the sifter to stall; and stillage containing corn (a byproduct of bourbon production) holds more water than the other grains and tends to become spongy.

Kason’s solution was to run the 230-460 V three-phase motor more efficiently at a higher voltage by adding a transformer to step up the voltage. For the corn stillage, changing the screen mesh size and installing a higher-pitch paddle assembly pulls the stillage across the screen cylinder effectively while maintaining the same throughput and dewatering performance without any clogging or imbalance, allowing unattended operation.

Around this same time of the introduction of the Kason equipment, Bendt was adding a new still as well as new technologies to increase production output.

“We put in a bunch of automation that was also linked up with Kason so that we could increase our production output by about fourfold,” DeHart says. “So now we’re producing around 25 barrels of whiskey a week. Prior to this investment, we were only producing about four to five barrels a week.”

This made the centrifugal sifter that much more crucial to the mix. “The disposal part of the waste product was still a big challenge,” DeHart adds. “If we were going to increase our production fourfold, that would create that much more of a challenge on the spent grain side to figure out a better solution.”

Ease of cleanout was a big factor in choosing the sifter, as was its compact design and low power requirements. “We’re really happy with the setup,” DeHart says. “It’s a good low-cost solution compared to what else is on the market for separating the grain at a fast speed.”

Though distilleries might be more protective of their secret sauce—grain bills, use profiles, distillation techniques, etc.—they’re fairly likely to help each other out on some of these techniques that Bendt is sharing now, DeHart says. “I think you find on the craft side of things, it’s usually family-owned businesses like ours,” he says. “We’re trying to encourage a strong craft sector that can compete with some of the big multinational players. And for that to be successful, we either all kind of win together or we lose together.”

Finding something like this sifter that will work for secondary processes is important. “It’s a big problem in the industry for how do we deal with this byproduct,” DeHart says. “The more success we can have in finding solutions that can handle these things cost-effectively and share that, the more successful overall everybody can be.”