More and more skin packs are showing up on retail shelves around the world these days, as the advantages of this pack format can be pretty compelling. 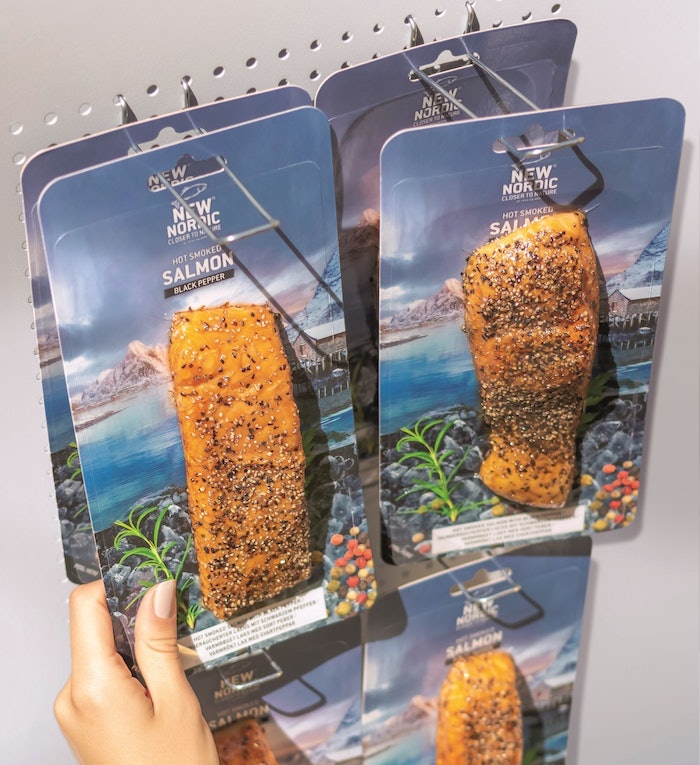 Securely sealed under vacuum, food products have a significantly longer shelf life and can be presented more attractively than when they are in trays or other more conventional pack formats.

Among the food marketers that have adopted skin packs is Danish seafood processor Vega Salmon A/S. An early adopter of Sealpac’s FlatSkinR skin packaging system for hot-smoked salmon products, Vega previously packaged these products in modified-atmosphere thermoformed trays with flexible film lidding. The move to FlatSkin was driven by a wish to reduce the amount of plastic packaging involved in getting product to market.

By Sealpac’s calculations, this package represents a 75% reduction in the amount of plastic used. The Switzerland-based supermarket chain Tegut, which operates 312 stores in Germany, uses this figure in messaging that appears on its Web site. Also on the Tega Web site is this: “The packaging is easy to open, and after removing the top film surrounding the product, the FSC-certified cardboard can also be removed from its plastic coating. Afterwards, the 3 components can be separated and recycled according to type. The innovative high-vacuum packaging enables more efficient cooling and longer product freshness thanks to the smaller volume.”

Vega also likes how the paperboard carrier lends itself to high-impact printing that provides enhanced branding opportunities. An added plus is that the packs can be displayed vertically as well as horizontally in the supermarket.

The producer of the paperboard carrier is VG Nicolaus. The paperboard gets coated with an unidentified polymeric protective layer that provides stability to the paperboard and forms a reliable barrier against grease, moisture, and oxygen. Printing is done on an offset press in four colors. Sealpac points out that low-migration inks and varnishes are used, but details on refrigerated shelf life are not available.

After the smoked salmon product is removed from the package, consumers are instructed by copy on the package to remove the clear polymeric layer from the paperboard carrier so that both paper and plastic can go into the appropriate waste stream. When asked how likely it is that consumers would actually go to such trouble, Sealpac’s Marcel Veenstra, Marketing and Communications Manager, says this.

“In Europe, separate disposal of paper is already done for many years. With the buzz around plastic now echoing as loudly as it is, it is now also common here to have separate disposal of plastics. In fact, every house in my town has separate disposal bins for plastic, organic waste, paper, and remaining household waste. At first, people were skeptical, but making sure the right waste goes into the right bin has now become a part of our lives. Retailers, too, are strongly promoting this.” Tegut’s Web site messaging mentioned above is evidence of this last observation by Veenstra.

The finishedpacks are placed in a vertical orientation in a corrugated case. The retailer either removes them from the case and hangs them by their peg holes or removes the top of the retail-ready case and paces it on the shelf of a refrigerated case.