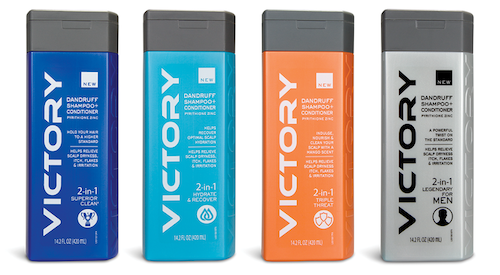 Studies show that the Millennial male is the consumer most in need of dandruff shampoos and conditioners. But Vi-Jon, the St. Louis-based private-brand personal care manufacturer behind products like Germ-X and other dandruff shampoos, found that the current dandruff products’ packaging wasn’t attracting Millennial men.

“If you look at the anti-dandruff shampoo segment, you’ve got one major player, and then a couple of others,” says Taya Tomasello, Senior Brand Manager, Vi-Jon. “There are brands that have been around for a long time, but they were kind of your dad’s or your grandfather’s shampoo, and there isn’t an updated option for this Millennial guy. Through our research, we found that Millennial men are a little more conscious of dandruff, and they are trying to solve that problem.”

“You look at other dandruff shampoos, and they focus on a problem,” Tomasello says. “We knew that the Millennial consumer is focused on experiences. We wanted to focus on winning and moving past negative experiences like having dandruff. That’s where the name Victory came from.”

Mission: Disrupt the shelf
Vi-Jon tasked Berry Plastics’ Blue Clover Studios to create a package with a strong brand message and visual identity that would stand out among its competitors on the shelf. Vi-Jon’s product development team was inspired by haircare brand Kevin Murphy and its “skincare for hair” products, which are packaged in rectangular PET bottles with hard angles and a geometric look.

With this shape in mind, Blue Clover Studios made a 3D model of an extrusion blow-molded high-density polyethylene bottle for Victory. But with the PE material, the sharp angles of the bottle compromised stability and fill level, unlike the Kevin Murphy PET bottles. As both teams went back to the drawing board, they found that rounding out the model’s hard angles maximized fill level accuracy and stability while still achieving Vi-Jon’s vision. The resulting design is a rectangular bottle with emphasized angles and a polypropylene flip-top closure.

Brand identity beyond the label
Since Victory was to be the new brand on the shelf, it was a top priority for it to stand out and differentiate itself from mainstay dandruff shampoos. While other traditional shampoo brands sport a label on the front of the bottle, Blue Clover Studios created a raised logo on the right side of the Victory bottle to differentiate it. The raised logo was also strategically placed on the bottle’s side for easier handling and grip in the shower.

“We thought it would be cool if we could put the Victory logo on the side, so as the consumer walks down the aisle of the store, they can see the Victory logo,” Tomasello says. “Since this is a new product, we want the brand to be first and foremost. We like how it turned out. You get the one-two punch with the logo on the side and on the front.”

The brand logo also appears on the bottle’s surface-printed polyester label in white or black, depending on the color of the bottle. The word “new” appears at the top of the label to further signify the brand’s arrival, and icons of trophies, water droplets, and armor on the label also help to augment the brand’s message.

Major victory
Vi-Jon first introduced Victory in March 2016 with an exclusive test launch of six SKUs in more than 100 Walmart locations in the U.S.

In 2017, Vi-Jon plans to analyze test results and use that information to push the product out to different retailers. Victory sells for $3.69, which is about a dollar value compared to leading dandruff shampoos currently on shelves.

As the use of industrial robots grows globally, so too does the need for education systems that can provide the right skills necessary to work on robots and intelligent automation systems.
Anne Marie Mohan
Oct 16th, 2020

Now on a biennial cadence, the Packaging & Processing Hall of Fame is inducting four new members into its ranks in 2020. The cornerstone of Paul Singh’s career at MSU has been his focus on education.
Aaron Hand
Oct 1st, 2020

Now on a biennial cadence, the Packaging & Processing Hall of Fame is inducting four new members into its ranks in 2020. Pat Reynolds, longtime Editor of Packaging World, reflects on decades of reporting on ever-evolving packaging.
Anne Marie Mohan
Oct 1st, 2020