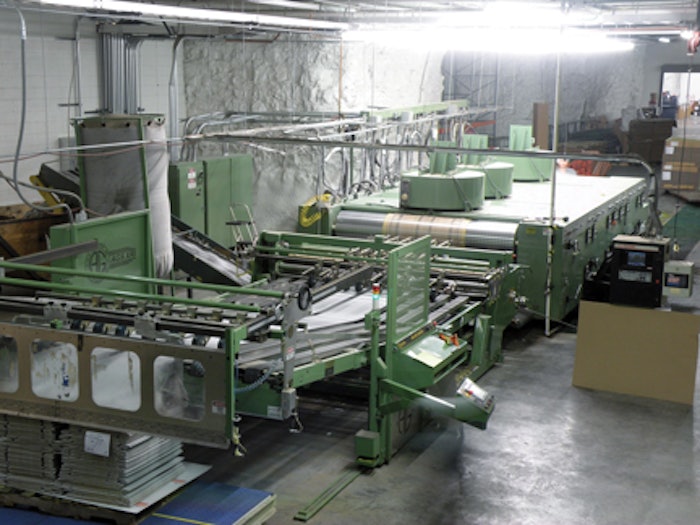 While many have boasted over the past several years that sustainability is a part of their company’s DNA, this year’s Beyond the Package Award winner and Innovator of the Year Award winner, Vanguard, can credibly claim sustainability as part of its physical make up. In October 2009, the company completed the three-year development of a 250,000-sq-ft subterranean manufacturing facility (see picture at left), adjacent to its existing 150,000-sq-ft underground fulfillment and assembly plant, in the Hunt Midwest Subtropolis industrial park in Kansas City, MO.

The new plant is part of a 34 million-sq-ft industrial park that was created from the caves that remained after miles of limestone bluffs were mined. The park is entered from the side of the exposed bluffs, with approximately 150 feet of limestone overhead. Vanguard’s new facility was created in an undeveloped area of Subtropolis and was the first in the park designed for manufacturing operations—a challenge that Vanguard met by hiring its own engineer who specialized in underground manufacturing. Among the “small things” incorporated into the design of the new plant that have led to big sustainability impacts, as well as significant cost savings, are the following:

• The plant’s 148-ft-thick ceiling provides geothermal insulation that keeps the environment at an average temperature between 75°F and 77°F. Mathes estimates that above ground, the manufacturing and fulfillment operations “would easily cost $50,000 to $60,000 a month to heat in the winter.”

• Because the majority of the facility is constructed of naturally occurring limestone, Vanguard estimates that the plant required between 200% and 300% less building materials to construct than an above ground facility.

• The use of polished concrete floors not only eliminated the need for more than 10,000 sq ft of carpet, but it also means that no new carpet will be required in the future to replace aging materials. Ditto for ceiling tiles: Vanguard painted the limestone ceiling black, with limited use of drop ceilings, to save 4,114 sq ft of ceiling tile. Explains Mathes, “We look not only at what our carbon footprint is today, but also at what we can do to prevent it from expanding tomorrow.”

• Preventing other companies’ footprints from expanding is another Vanguard credo. On the suggestion of employees, Vanguard equipped its plant solely with overruns of lighting fixtures from other construction projects.

• Lighting consists of T-5 motion-activated systems that Mathes estimates have largely contributed to the plant’s 13% reduction in electrical consumption. “No one piece of equipment uses more energy in a day than the lights we use as a unit,” he says. He adds that given that the cost of the new lights [just for the office] was approximately $62,000, and Vanguard received around $53,000 in rebates from the power company, their use was “a financial no-brainer.”

Beyond the initial construction of the plant, Vanguard has incorporated processes into its everyday operations to increase efficiency and reduce waste. Mathes notes that the opportunity to reorganize the plant floor with the move, creating “pods” of similar manufacturing processes, has cut the company’s waste in half.

Vanguard has reduced its ink waste by bringing ink mixing in-house. In this way, leftover ink can be worked-off by being combined and reformulated into black ink. This process has reduced the frequency of Vanguard’s ink shipments from three times a week to twice a month. The ink itself is also noteworthy: Vanguard uses a tree rosin-based formulation from BCM Inks USA that is made from a byproduct of the paper milling process.

When it comes to the remaining waste, Vanguard reports that “everything that can be recycled, is recycled.” Waste that cannot be recycled is collected and sent to the power plant of a nearby cement manufacturer where it is used in an Alternative Solid Fuel (ASF) program. Combined, these initiatives prevent 95% of Vanguard’s waste from going into the landfill.

While Greener Package Awards judges used words such as “incredible,” “visionary,” and “outstanding” to describe Vanguard’s sustainability achievements, Mathes is humble. “Anybody can duplicate what we did because we didn’t go out swinging for home runs,” he says. “We went out swinging for singles and let those add up.”