Increasing production capability as demand increases has been a logical formula for packagers for decades, though the trick is knowing when to automate. That tack was taken during an early 2007 upgrade to the downstream operations of Foster’s Wine Estates Americas at its Napa Bottling Co. (NBC) operations in Napa, CA. Part of Australia-based Foster’s Group, the NBC facility bottles Beringer Estates products.

Opening in 2006, the facility houses four packaging lines, including one for 187-mL PET bottles for Beringer and Stone Cellars brands. The plastic format debuted in 2004, making the company one of the first in the to fill wine into plastic bottles, according to NBC technical director Tom Cooper.

“We weren’t sure how popular the plastic bottle was going to be, so there was no investment in any automation for the backend of the line,” says Cooper.

The BasketWrap machine, which packs the 187-mL bottles into 4-count carriers, is the second BW200 installed in the world, and the first in , according to the vendor. The Sabel unit, which can collate and load the carriers into three different formats, packs six of the carriers into 24-bottle count corrugated cases. Sabel says it is the first time that bottles in this type of carrier have been automatically case packed.

Handling the engineering and integration services was Ad Verkuylen of the NohBell Group, LLC (www.nohbell.com), who has integrated all four production lines at the NBC facility. NohBell provided project management and also developed product specifications and requirements.

“NohBell has done a very good job for us on this part of the project,” says Cooper. “Project manager Ad did an excellent job working with everyone internally to get the specifications pinned down and on time. He also worked with MeadWestvaco and Sabel staff throughout the process to make sure that everything went off well.”

Although both the machinery vendors were new to Cooper and Beringer—though Foster in had installed a BasketWrap machine previously—the startup and training curve were as smooth as a Beringer’s zin, according to Cooper. “The pleasant surprise was everything went pretty much as we hoped it would. Because everything was on the backend of the line, we could set the equipment in place and get everything readied ahead of turning it on. It was a pretty easy installation.”

“The equipment is sophisticated, but we’ve had good support from both vendors and NohBell, and both machines have an excellent operator interface,” says Cooper, who also credits the efforts of two key production employees, lead operator Maria Bravo and line mechanic Jason Hawkins.

Cooper estimates that the “tidy little” 150-ft-L U-shaped line occupies about 10% of the 150,000-sq-ft NBC facility. Operated daily at a rate of 220 bottles/min, the line begins with the existing operations of unscrambling, filling/capping, and labeling comprised of equipment of 2004 vintage relocated from the company’s operations in Paso Robles, CA, about four hours’ drive away. Rounding the second leg of the U, the PET bottles, supplied by Field Bottle Manufacturing (www.fieldbottles.com), are conveyed to labeling and then on to the new downstream operations.

During the day of our visit, the company’s most popular product, Beringer’s white zinfandel, was packaged. Cooper says that particular product is run about half the time.

Beringer operates the 100%-servo-driven MeadWestvaco machine at about 55 four-pack carriers/min. When viewed in operation, the machine appears to be moving slowly even at that speed because it’s rated up to 100 carriers/min.

“MeadWestvaco was here with lots of technical support and training for our personnel, and it quickly resolved any issues that arose,” says Cooper.

Bottles are collated into a 2x2 pattern before the carriers are applied over the top of each bottle grouping and the tabs are locked from underneath. All this is done in continuous motion.

It is also capable of running a 2x4 format in the future that the winery is considering, according to a MeadWestvaco source.

The company took the opportunity to redesign the shape and the profile of the carrier. The carrier blanks, from MeadWestvaco, are produced of Coated Natural Kraft® (CNK®) board, a bottom-locked basket with stand-up handle and an attractive new design. Two of the carton’s four panels have an arched die cut that replaced the straight edge, standard 90º die cuts before.

“The package really looks good,” opines Cooper. “The combination of new graphics and the new carrier shape give a bolder, fresher look.” He believes the new carriers use a little less board than before. The machine was specified with the new carrier design in mind.

On both the downstream machines, the interface is a Rockwell Automation (www.rockwellautomation.com) PanelView. It’s a Model 1500P on the MeadWestvaco, which also uses AB servos. This represents MeadWestvaco’s first use of Rockwell/Allen-Bradley controls in the , according to the machinery vendor.

“The PanelView is very good about informing you where the fault is,” says Cooper.

The packed carriers continue along 20’ of conveyor leading to the Sabel Model SE-15/Compact Bottom Loader. Although Sabel is located practically “next door” in just 30 miles away, the case packer came by way of . That’s because it was featured at Pack Expo 2006 where it was demonstrated running Beringer’s packages.

During packing, the 2x3 carrier grouping is raised up through the open bottom of the case. Then the bottom and top flaps are glue sealed in sequence, the bottom when the case shifts over to the discharge conveyor, and the top is sealed just prior to the machine exit. Sealing is done by a Nordson Corp. (www.nordson.com) ProBlue® series gluer.

Says Hawkins, “The packer has been a trouble-free machine that’s easy to operate and service.”

The filled 32#-test ECT cases, provided by Longview Fibre (www.longviewfibre.com), continue on for manual palletizing and then are transported by forklift to a semi-automatic stretch wrapper for unitizing.

These automation improvements also represent significant labor savings. Before, 10 to 12 operators, who have been reassigned to other duties, were required for just the downstream operations. A total of five operators now run the entire line.

Cooper understandably feels good about how things turned out. “The equipment has been running really well, and there isn’t anything we would do differently. It reaffirms the basics that if you take time and do your homework and get the specifications right and then deal with high-quality suppliers, like MeadWestvaco and Sabel, your chances of success are pretty good.”

To see a video of the equipment featured in this article, click here. 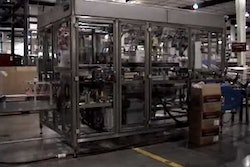