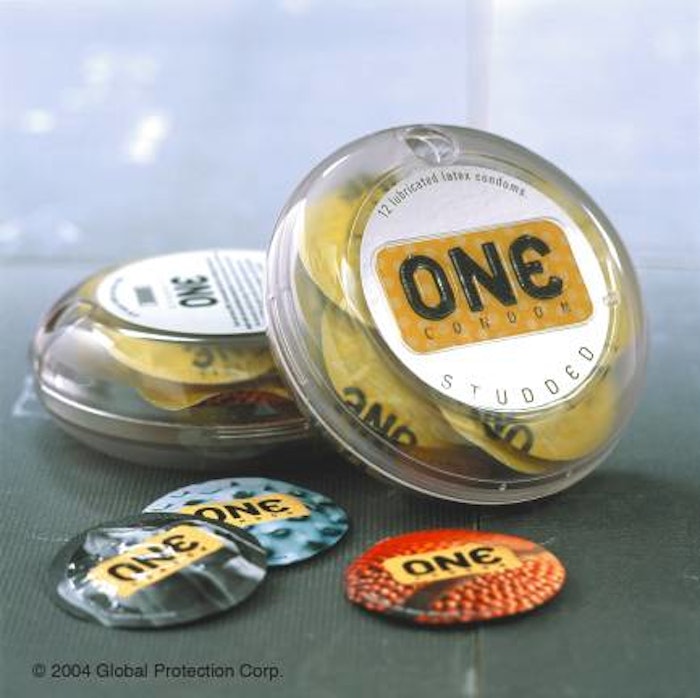 A two-piece custom-molded threaded case of polycarbonate is used to hold 12 of the wrapped condoms.

The five-panel folding carton has long been the dominant package for condoms. However, Global Protection Corp. of Boston has decided to change that for its new One Condoms in a round, partially clear plastic case.

“The U. S. condom market in particular is prone to repetitive, me-too product and packaging design,” says Davin Wedel, founder and president of Global Protection. “But today’s consumers want choices that meet not just their practical needs, but their emotional and intellectual needs for product innovation as well. At Global, we develop choices that speak to our customers on an individual level. The new One Condoms line recognizes that when you buy a condom, you should be choosing something that reflects your own taste, style, and preferences, not just settling for the same old thing.”

The new line, which started reaching stores in June, are individually overwrapped condoms packed 12 to a two-piece, injection-molded, round polycarbonate case.

However, even the overwrap for the new line is different from most competitors. Unlike most condoms, these are overwrapped in registration with printing.

“In the past, a traditional step-and-repeat sealing process produced long ribbons of foil packaging, with no way to predict where a printed image would fall,” Wedel says. “Graphics and text were repeated continuously, and perforations often fell in the middle of an image. Our new brand uses creative, diverse artwork, with each full-color design centered and printed on the wrapper.”

The new line is manufactured in Malaysia, and overwrapping is done in the same plant. Although materials are sourced locally, Global Protection’s Boston people worked closely with the Malaysian plant to select the overwrap substrate. For these premium products, the company chose a 31¼2-mil lamination of cellophane/polyethylene/aluminum foil/DuPont’s Surlyn sealant.

“We elected to spend more money on the wrapper than most other companies,” Wedel states. “We tested many materials to try to eliminate leakers, and that’s why we chose to use a heavier layer of Surlyn. It just seals so well.”

Wedel says that there are differences between condom consumers in the United States and those in Asia. “Consumers in Asia aren’t bothered by a package that might have some lubricant on it. Here in the United States, that kind of package won’t sell. So leakers are the single biggest issue for companies that import from the Far East. Thanks to the new material and the overwrap system, we’re now at a point where we’ve reached zero leakers.”

As important as the lamination and sealing process, Wedel says that training the people in the plant was critical. “We’ve worked hard to train the packaging people in the plant to make sure they used the right materials and the right settings on the equipment to get good seals. We taught them that it would reduce plant scrap as well as eliminate returns.”

The company evaluated lots of materials and suppliers before it selected a Chinese manufacturer to make the two-piece PC case. “Often it’s difficult to find all the technology locally,” Wedel says. “Even when you do, the mold costs are so different that we couldn’t produce a product that we could sell here, given the costs. We strongly preferred to source locally and not to have to worry about leadtimes and shipping, but we just couldn’t afford it.”

The PC parts were selected only after the company had evaluated other materials. It started with a different resin that the company thought had a nice tactile feel to it. When it was tested, consumers told the company they thought it was like a left-over food container, so they were unimpressed with its quality.

The front of the two-piece case has the brand’s logo embossed into it, so that if the case is reused, it reminds the consumer of the name. In addition, Global specified a slight matte finish or texture to the molds for the case. “We wanted consumers to see the colors of the wrappers inside, but not through a totally clear window,” says Wedel. “We wanted it to be more subtle.”

Although the tooling costs make the PC parts more affordable from China, Global Protection says that its supply hasn’t been without some issues. After some nested parts were scratched in transit, the supplier now wraps each piece in paper to protect them. In addition, the corrugated containers holding the parts originally weren’t strong enough, so damage had been an issue. “We’ve had to double up on the specs for our corrugated cases to withstand the rigors of shipping,” Wedel says. “Consumers here will walk away from a scratched or marred package.”

Most of labor is here

In contrast to what’s done by most companies that outsource to Asia, Global Protection employs most of its labor here in the United States. In no small measure, this is because condoms are considered medical devices and thus are subjected to rigorous inspection.

“Especially for a premium product, we really have to make sure our quality is the best in the marketplace,” Wedel points out. “Doing what we do requires a completely different approach to inventory management. When condoms are shipped into the United States, they undergo a quarantine while they’re being tested by the U.S. Food and Drug Administration. The agency does random testing at the point of entry, and it can last up to 60 days before an order is released to us.”

At its Boston plant, workers carefully inspect the prewrapped condoms as they’re being loaded into the PC case, along with an accordion-folded instruction booklet. After the top of the case is hand-labeled on the inside, the two pieces are twisted together to engage threads about a quarter-turn. Once closed, safety seals in the form of pressure-sensitive labels are added to two sides for tamper-evidence—and to keep the two pieces from unscrewing in transit. So the consumer has to remove the safety seals in order to open the pack.

In addition, another label is affixed to the base of the pack. But the real trick in all this assembly is the application of the inside label. Because the outside of the front panel has the brand name embossed into it, the main label is applied to the inside of the cover. “It has to be placed perfectly so the label lines up with the embossing,” Wedel says.

Supplied by Lion Label, this label is a clear polypropylene that’s reverse-printed flexo in three or four spot colors and then laminated to a metallized polyester with a matte finish. The converter’s account manager says there’s nothing unusual about the adhesive.

The key, he says, is not only positioning the label but wiping it down carefully so that the adhesive becomes invisible. Thus, the front label is viewed by the shopper through the PC cover and through the adhesive holding the label in place. The art initially had to be converted from CMYK to spot colors, so they’d be bright enough to be seen clearly through the case and adhesive, says Lion’s account manager.

Down the road, says Wedel, the molder of the case will probably add clips to the inside of the cover to hold an insert in position so that Global Protection can replace the difficult labeling process.

The plastic case holding 12 condoms retails for about $12.99 and is currently available online. Retailers already planning to sell the new line includes Publix stores, CVS, and Walgreens. Although this package has a hole for peg-hanging—the most common merchandising technique—Global will supply Publix three packs in a clear plastic tray for stand-up merchandising on a shelf.

“We wanted this package to create some excitement with a new shape,” Wedel concludes. “We felt it was the best way to differentiate this new brand.”