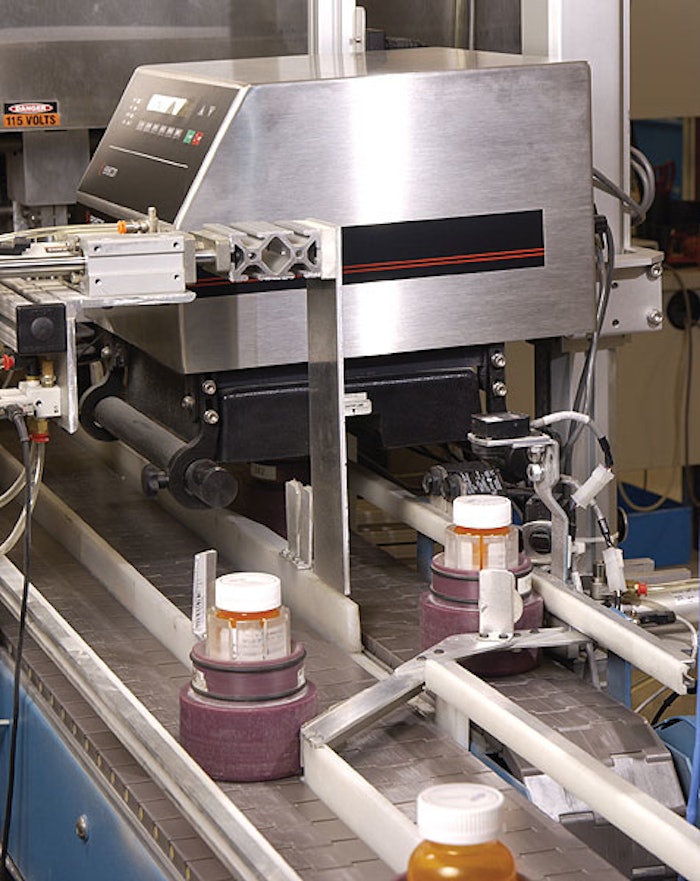 Summary: As a point of differentiation, Prescription Solutions induction seals bottles so that a cap liner adheres to the mouth of the bottle to create a tamper-evident package. The sealing energy emitted during induction sealing was similar to those of inline radio-frequency identification (RFID) antennas used to track bottles, interfering with the system’s communications, and slowing the line. A new Enercon induction sealer’s coil design helps focus the unit’s signals to the application area, eliminating the problem, and yielding additional benefits.

The packager: Prescription Solutions is a leading provider of pharmacy and medical management services to employer groups, managed care organizations, union trusts, and third-party administrators nationwide. Costa Mesa, CA-based Prescription Solutions manages prescription drug benefits and works with organizations closely on how they can best control costs, improve safety, and offer the most effective drugs for the patient,” says Dave Booher, pharmacy manager. “At the mail service facility, we are primarily responsible for filling prescription orders.”

While the facility handles upwards of 4ꯠ different medicines, most prescriptions are “maintenance medications,” for chronic ailments such as high cholesterol, high blood pressure, and diabetes. About 80% of the prescriptions are shipped via U.S. mail, though other carriers are used.

The packaging line: One packaging line at the 85ꯠ sq’ Carlsbad, CA, is used for tablets and capsules, usually in quantities of 90 to 540 per bottle. For specifics on the line flow and the packaging equipment involved, see sidebar, p. 69.

The challenges: At any moment, Prescription Solutions tracks between 400 to 500 individual drug prescriptions on the line, each filled into a pill bottle that’s conveyed in a high-density polyethylene puck. Each puck includes an RFID chip or tag with an antenna. As the pucks are conveyed on the line, they pass numerous RFID antenna-readers that constantly emit RF signals. The tag responds with the chip number that corresponds to the prescription. That number is downloaded into a computer, which, in turn, triggers pneumatic devices on the conveyor that assist the movement of the puck downstream.

Trouble was, the signal frequency of the RFID equipment was in the same range as the frequency emitted by the original induction sealer used on the line. “Our previous sealer’s signals prevented the RFID chip from effectively communicating with the readers along the conveyor,” relates Booher. “The main issue was within about a 10-foot radius around the [sealer] that was disrupting the RF communications. The lack of communication meant the puck couldn’t be diverted where it was supposed to go. It disrupted the routing.” That slowed down the line because it delayed the puck from moving downstream.

The frequency difficulties were especially nettlesome, Booher says, because “to my knowledge, we were the first mail-service pharmacy to begin to safety-seal prescription medications before mailing them out.

“We wanted tamper evidence to increase consumer confidence and because there’s occasionally rough handling in the mail. With an induction seal, even if the cap should be broken for some reason, the bottle remains sealed. You have to destroy the bottle or the liner to get into the contents.”

The solutions: “We tried several remedies to shield the sealer in some way,” says Booher. “The [other] sealer vendor worked with us and provided some ideas, suggestions, and add-on components. We started out with a 10-foot radius of interference and we were able to eventually reduce it to 31¼2 feet, but it was still interfering with one or two readers that were within that radius, so it was unacceptable. That was about a year ago. We now use that sealer for another application on a [different] line.”

Prescription Solutions worked with its distributor, Tri State Distribution to remedy the difficulty. Tri State had originally suggested induction-sealing the bottles and recommended the Enercon equipment.

“Bill Zito at Enercon recommended a [different] machine that focused its energy waves in a different fashion. We weren’t sure about it, but we gave it a try. As it turned out, it didn’t create the issues the other unit did.”

According to Enercon, the new unit’s coil design is designed to focus its energy only to the seal area so it doesn’t cause interference with the frequencies emitted by the RFID readers.

The benefits: Not only did the Enercon unit eliminate the frequency pollution, it also boosted customer service. “Before, we’d get occasional complaints from patients saying the postman must have stepped on the prescription bottle or bag because the cap broke and the pills all spilled in the bag,” says Booher. Since the company added the Enercon unit (it now employs five different Enercon sealers for different lines at the plant), “we haven’t had those complaints.”

That benefit, Booher notes, “creates economic savings, improves safety, and increases patient satisfaction. It also reduces general loss in that we don’t have to replace product that’s been damaged or spilled.” All those benefits sound good to Prescription Solutions—at any frequency!

See sidebar to this article: Understanding the packaging line