The unique Envirogluv One Wash™ organic-based polymer inks are removed during normal washing per the same Canadian returnable beer bottle standard that removes paper labels. Bottles are refilled as many as 15 to 20 times. It is the first One Wash application in North America. and contrasts to Voss of Norway’s use of permanent Envirogluv inks (see packworld.com/go/c041).

The bottles are printed on front and back by Alliance Labeling (Oakville, Ontario, Canada) on a new line that includes six-color screen printing machinery retrofit with UV lamps to cure the inks along with special equipment for Envirogluv.

“We’re very excited about this new innovation,” says Nigel Miller, Labatt’s director of public relations. “Not only has it given us a unique way to put a fresh face on one of Canada’s greatest beer traditions, Labatt 50, but it enables us to do so in a way that furthers our commitment to reducing solid waste in our packaging.”

The brewer also used the switch from labeled bottles to redesign the graphics. Labatt declines to disclose costs or future plans for the paper-less bottles, except that “we are assessing the impact this launch is having with consumers,” says Miller. Glass is used for 70% of Labatt’s packaged beer; all of its domestically produced beer bottles are returnable. Other than not requiring labelers, the printed bottles run in production the same as their predecessors. —RL 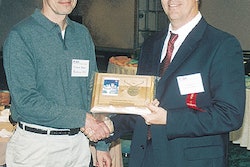 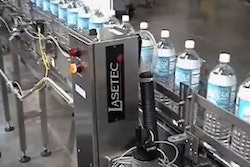 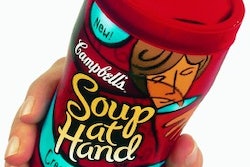 Campbell Soup gets a hand