Can IoPP strengthen its chapters?

Some say local chapters are the lifeblood of the Institute of Packaging Professionals, but they’ve been ignored. Will this change?

Like many organizations of individuals, the Institute of Packaging Professionals often relies on local chapters to carry its message. But over the last few years, volunteer chapter leaders have regularly complained about little support from the national office. So Packaging World asked IoPP’s new leadership about its plans for its local chapters.

“Let’s turn that question around,” responds Edwin Landon, IoPP executive director. “Some chapters are strong and very self-sufficient. Others are in the middle; they do okay, but are unhappy with headquarters’ support. And we have some in areas that are weak and may not survive.

Chuck Perrin, CPP, who is retired but currently serves as chair of the operations committee of IoPP, has also heard the criticism. But he doesn’t particularly agree on the responsibility. “Frankly, the key to chapter success really lies with the local office holders, much more so than the national staff. It really depends on programs and content. If a chapter has good programs, good content, good venue—if they present something of value—then people will come out and events are successful.”

He also tells a story about himself to prove his point. When Perrin worked at Dow Agrosciences in Indianapolis and served as an IoPP officer, he was scheduled to speak about the organization and its benefits at an Indiana chapter. “Although it was well promoted, the turnout was very low,” he reports.

“Later, I gave a presentation to the same chapter on agricultural chemical packaging and a new line we had put into a French plant. That night the audience was triple the size of the earlier evening. On top of that,” he says, “none of the attendees really had connections to agricultural chemical packaging.” Perrin is convinced that it was the more interesting program content that drew more members to the second presentation.

Another former IoPP officer isn’t convinced that even good content will draw attendees to local chapter gatherings. “One chapter president I know said she couldn’t get anyone from headquarters to even visit the chapter for something like three years! Plus, the headquarters didn’t offer any help in programming or membership development. This is why some members refer to the former national office as a ‘tight little club.’”

That criticism has impressed itself on the new administration. “Pat Farrey and I are trying to visit each chapter, one by one,” says Landon. “And so is the executive committee. We want the national organization to be represented at the chapter level. Our role now is just to ask, ‘How can we be helpful?’”

Both Landon and Farrey say they’re working hard to rebuild the organization’s Speakers Bureau so that chapters will have access to new speakers and topics.

“We have other tools. We’ll make available the Fundamentals in Packaging Technology course on a local chapter basis,” Landon says. “If a chapter can assemble 12 individuals who want to take the course in one location, we’ll bring it out to them. And it’ll be our job to market it well so that we get enough attendees to make it profitable.”

Not only does the national office want to make speakers available, it plans to offer content from its technical committees to chapters as well. “Our role now is to push information out to them so [the chapters] can do their jobs better,” Landon says. “Their responsibility is to have active officers willing to put programs together.”

Farrey admits that chapters have not received much help or even contact in the last few years. Several former chapter officers complained that their chapters never received promised rebates from headquarters for their members. When put to the board, the board voted to resume paying rebates “when the budget can support it,” Landon says.

Despite this, some chapters have done a good job on their own. “Some have supplier trade shows, ongoing education courses, even non-packaging courses like crisis management for companies,” Farrey says. “We plan to stimulate chapters with the best of these proven ideas.”

Communicating via the Web

Along with personal visits, the new administration plans to use its Web site to pass along information on successful programs, reports from technical committees, and additions to the Speakers Bureau—all to provide new ideas for chapters.

“Some of the chapter-support issues of the past had to do with budget issues,” points out Chuck Perrin. “So we’re looking at efficient ways to improve that. That’s why we’re moving our national board meetings around the country, especially where some chapters are closely tied to schools that offer packaging programs.”

IoPP’s board meeting was in April at Michigan State University in East Lansing. “This way, the packaging school, the local chapter, the student chapter, and the national organization all get together in one location,” Perrin points out.

The student chapters will also get more attention, says Landon. Michigan State’s student chapter, for example, has about 100 members. Plus, Landon explains, the first year out of school the former students can become professional members at no charge. “The idea is to get them involved, but give them a year’s grace period. They just have to sign up. But IoPP has not done a good job of communicating this to the students or their professors, because a lot of them fail to sign on.”

To demonstrate IoPP’s commitment to new ideas, Landon reports that the organization has created an Educational Committee, chaired by Howard Leary of Luciano Consulting (Somerville, NJ). In the past, this was a staff function.

Plus IoPP has a new food-and-beverage task force, headed by Jim Peters, a former industry editor. It will look at those businesses, according to Landon, to determine if there are packaging issues that IoPP should address.

“In the end, we may have one or more technical committees because we have many members from those businesses, but we really have no focused activities in those areas,” Perrin points out. “We’re hoping to add value to those kinds of members.”

Perrin explains that the Drug and Pharmaceutical Committee and the Chemical Packaging Committee are so strong and effective that the associations of manufacturers typically refer any packaging issues directly to them. “We’d like to create the same kind of situation with food and beverage packaging issues,” he says.

Landon adds that these technical committees can often be the source of interesting programs for chapter meetings. Although Landon has heard his share of complaints from the chapters, he thinks the satisfaction level among members is greater.

“For every member who complains, we think there are probably one or two with great success stories,” he says. “I think it’s the ‘squeaky wheel’ syndrome: the complainers are louder than those who are satisfied. I’m convinced there’s nothing wrong with IoPP that can’t be overcome by what’s right with it.”

See sidebar to this article: Member certification: Strengthening and promoting 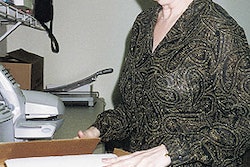