A vision for customer satisfaction 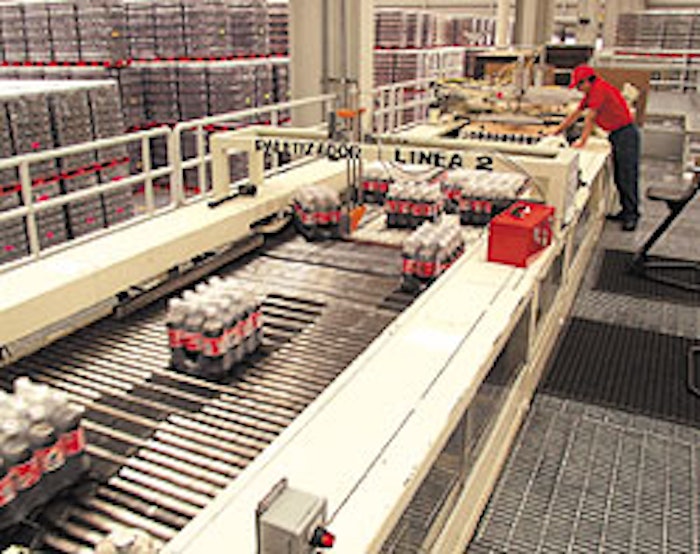 On the infeed to the palletizer (left), the machine vision camera points downward toward the bundled packs (opposite right). The

Located in Toluca near Mexico City Mexico Coca-Cola Femsa Toluca serves a consumer base of more than 40 million people and is the second largest Coke bottler in Latin America. In any language that translates to high-volume high-output production done using large-scale automated equipment. In May 2001 the bottler added two machine vision sensors to its automation repertoire. The installation addresses consumer complaints caused by short-counts on bundled multipacks.

The Series 600 SmartImage Sensors™ from DVT (Norcross GA) inspect shrink-wrapped bundles of bottles on two packaging lines just ahead of palletizing. Bottles may be 12-packs of 1-L bottles or 24-packs of 500-mL bottles. The system is designed to check for missing bottles.

Located at the entrance to the palletizer the camera is pointed downward and makes its inspection by noting the number of bottle caps that it sees. Rates are said to be up to 35 bundles/min.

Built in late 1998 the modern Toluca facility is designed for energy savings when it comes to plant lighting. As a result there’s an abundance of skylights throughout the operations that allow natural sunlight to filter down into the plant.

What’s good for energy conservation isn’t always good for machine vision systems where light consistency is a necessity for standard accurate measurements. Passing clouds can throw off the readings. Coke Femsa’s solution houses the cameras and lights inside stainless steel boxes mounted over the infeed conveyors to the palletizers. Lighting is provided by two fluorescent lamps mounted at a 45° angle to the moving bundles. A side benefit to the housings is that they prevent anyone from fiddling with the cameras.

A proximity sensor detects a bundled pack and signals the vision sensor to capture an image and then analyze it. The Smart Sensor camera offers 640 x 480-pixel resolution as well as an embedded microprocessor that uses FrameWork™ software to analyze the image. The camera measures 1.6’’ x 2.2’’ x 4’’.

If a short-count package is detected the vision system signals the palletizer’s programmable logic controller. The PLC then stops the palletizer so that an operator can clear the defective bundle from the line. Coke Femsa automation manager Ernesto Simroth plans to upgrade the system with an automatic rejection feature in the future.

Simroth reports that the biggest advantage for them is that they “have not had customer complaints on missing bottles since the installation.” That covers a 24/7 operation over the course of about six months that the sensors have been in operation.

One of the challenges Coke Femsa faced with the sensor was to accommodate bottle caps of different colors. The operation found that by adding a filter over the light source it could maintain a constant level of reflection from the caps that’s read by the camera. Cap colors range from white printed with copy and logo to green dark blue grey yellow and red.

Simroth says that they are currently installing three additional DVT vision systems on other lines.

In 2018, Packaging World spoke to Tom Mooradian, Sr. Manager, Environmental Sustainability at PepsiCo, about the brand's recycling initiatives. Three years later, we catch up with him to check on progress, changes, and see what's on the horizon.
Matt Reynolds
Jul 23rd, 2021
More in Home