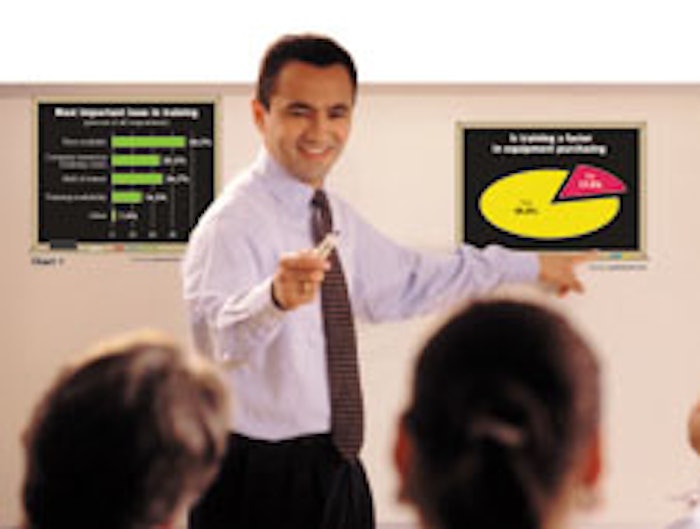 This represents the third in a series of special sections that have been targeting the development of people in packaging.

In ’96, PW published “Packaging 2000,” a series of articles that reported on the skills that many packaging experts described as crucial for packaging people as manufacturers planned for the future. Two years ago, the magazine targeted the beginnings of the tight labor market and offered the collective wisdom of many industry experts on how to attract and retain good workers in “The Staffing Struggle.” Out of that multi-part report came the concept for this year’s coverage of training.

By the way, PW’s coverage of training probably won’t end any time soon. That’s because it’s an industry issue whose importance will only continue to grow as our companies use ever more sophisticated equipment and as our leaner management structures require supervisory people who have more versatility in their skills.

That’s one reason we found the burgeoning training program at Nabisco’s Planters plant in Arkansas so interesting (see p. 106). Not only will it focus on machinery skills, but it also recognizes the importance of basic knowledge of math and reading. Finally, the Planters training also demonstrates how vital “people” skills will be to the valued workers of the future. Although not specifically articulated by the company, the program is geared to be self-perpetuating. As the program’s graduates are promoted to increasing responsibilities, their success “endorses” the value of the programs to those workers who follow them into the lower-level positions.

A big part of the “Training” section also covers the results of a survey conducted via this magazine’s Web site, www.packworld.com. Not surprisingly, two of the most eagerly sought training aids were training programs conducted via videotape or, even better, through interactive Web sites. The key reason behind these—and some far more costly method—was so that plant personnel could have training programs available at almost any time and place. Waiting for a new roll of material from the warehouse? Access a training video that can give a couple of short tips in 15 minutes.

Certainly videotaped training is doable now, but it’s probably not practiced to a significant extent. Web-based training isn’t far off, at least technically. Making that Web training truly interactive would probably take considerably longer, but it’s certainly not out of the realm of possibilities. Whether this is accomplished by individual companies or by associations organized within specific business communities, or even by third-party providers isn’t as important as making a good beginning.

Incidentally, one of the unsung heroes of our survey reports is Gary Payne. He’s the free-lance designer who often translates the ideas of the editors into the colorful, compelling and sometimes whimsical charts that are published in these reports. And Gary is just one of many free-lance artists and production people who help us each month move from ideas to a finished magazine. Frankly, the use of free-lancers like Gary Payne by us, or outsourcing certain tasks by packagers, is simply another tool in the arsenal of manufacturing management.

And training is another. Increased packaging training usually results in a solid contribution to a manufacturer’s productivity rate. The main driver of this long U.S. economic boom has been the continuing improvements in worker productivity, one that has rightly astonished even the most seasoned observers.

Packaging’s a part of that improved productivity, whether through training or outsourcing or other methods like the new Web site prompt boxes that you’ll see in a few stories this month. This box directs you to www.packworld. com and offers suggestions on keywords that will provide more information about the subject or topic of that story. It’s another way to help readers gain more information and become more productive. Next month’s Pack Expo show promises even more new ways for companies to enhance their packaging productivity through new equipment.

Built on selling into retail private label, Sofidel recently launched a consumer brand of its own, Nicky, to serve as a proof of concept and market testing brand for a unique paper-pack solution for bath tissue and paper towel packs.
Matt Reynolds
Nov 18th, 2021
More in Home