Sales of Ocean Spray's 1-L juice drinks are up 30% in the U.K. due to a graphics redesign that creates a look of 'elegant simplicity' on the shelf.

In the United Kingdom, cranberry juice drinks aren't as mainstream as they are in the U.S. But Ocean Spray Cranberries is trying to change that. "We've sold these products for a few years in the United Kingdom, and they're really starting to catch on," contends James LaBelle, marketing development manager for Europe at Ocean Spray, Lakeville-Middleboro, MA. He credits Marketing By Design (Beverly, MA) with a graphics change that "has helped increase our sales of these juice drinks by about thirty percent" since the redesigned carton first appeared on shelves last February. LaBelle says, "Retail shelves [for these beverages] are cluttered with a lot of different designs. We felt our previous carton graphics used too many elements. Marketing By Design delivered on what we asked them to do-create a more simple look that emphasizes the product's fruit equity and refreshment value. We've gained an elegant simplicity that really stands out on the shelf." Red and white colors dominate the new design, which shows a glass of juice alongside an appetizing array of fruit. An updated logo, with greater dimension, is also part of the change incorporated by the design firm. Ocean Spray sells the 1-L and 200-mL sizes almost exclusively at retail in England, Scotland and Ireland. Cartons are manufactured and converted by Tetra Pak (Chicago, IL) in Sweden. Printed via gravure in five colors, the adhesive-laminated carton structure includes the printed paper exterior/paper/foil coated with polyvinylidene chloride. Total thickness is about 3 mils, says Ocean Spray's Bill Rainey, technical manager, international service. Cartons are subsequently filled by international juice maker Gerber Foods Holdings (London, England). LaBelle explains that Ocean Spray and GFH have a manufacturing and distribution partnership in the U.K. GFH fills the cartons on what LaBelle refers to as "standard Tetra machinery." Rainey says that the shelf-stable Tetra brick "is what we call a 'Slim-line' carton, as opposed to its stockier cousin that's more common to U.S. consumers. Ocean Spray's U.K. carton stands 61/2" H x 33/4" W x 21/2" D (166 mm x 94 mm x 63 mm). The carton is used for five flavors of juice that retail for just under U.S. $2. "The design is premium, upscale and sophisticated," says LaBelle. "We're still experiencing good sales volume, and retailers are excited about the new look," he continues. "The new graphics have done a nice job for the product's shelf presence and have helped us gain additional facings, so we've increased our shelf space." 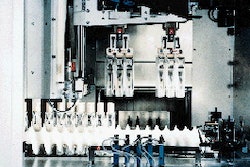 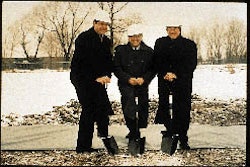 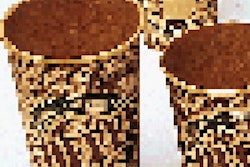 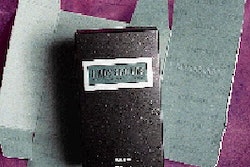