The outsourcing of packaging functions has been yielding benefits, Packaging World readers report. Cost savings and satisfaction are the upside, while only half of respondents report increases in plant efficiency.

Most manufacturers are enjoying major benefits from outsourcing at least some packaging functions, and more functions will be moved outside in the future. So say respondents to Packaging World's 1997 Outsourcing Survey.

Last month, Part One of our report identified the functions most likely to be outsourced, and also indicated which types of vendors were commonly used to provide those services (see PW, Dec. '97, p. 28). Part Two reports on the benefits companies receive from outsourcing, along with trends on which functions are being planned for outsourcing now and in the future.

More than 120 readers completed a detailed mail survey that was sent to a small sample list of PW readers. The survey was conducted with the assistance of Market Research Support Services (Itasca, IL), an independent research consultancy. Because of the broad spectrum of PW readers, the statistics in this report may not reflect the entire circulation. Still, combining the trends numbers and the personal comments from respondents, there's little doubt that outsourcing is continuing to play a strategic role in how manufacturers of all types handle a variety of packaging functions.

As shown last month, more than seven in 10 survey respondents work at companies that do some packaging outsourcing. Of this 70.2% of respondents, the survey asked about the top benefits that outsourcing provides to the company. The questionnaire listed six choices, all of which are shown (Chart 1).

Predictably, the benefit most often cited is reduced labor costs (27.8%), followed closely by cuts in overhead costs (25.8%). The director of materials for a West Coast maker of electrical parts explained the benefits his company receives from outsourcing. "Our shift to an outside contractor occurred several years ago for government packaging requirements," he reports. "This reduced our capital equipment costs, our maintenance costs, inventory costs and labor costs, too. And it meant we didn't have to hire special packaging 'talent.'"

That view is echoed by an engineering project coordinator for a major meat processor. "Experimental and small-run orders are now produced by a co-packer," he says. "Shifting the inventory responsibility reduces our overhead. Meanwhile, equipment integration done outside helps us reduce our labor costs."

Another respondent points to both cost savings and the benefits of partnering with vendors. "We use our suppliers to identify cost-saving opportunities and to explore ways to improve the quality of incoming raw materials. This has not only improved our efficiency, but also our relationships with our suppliers," according to the operations manager of a food processor in the Pacific Northwest.

The other four benefits of outsourcing totalled a bit less than half of the total "votes" of survey participants. PW readers report that outsourcing rarely permits a manufacturer to eliminate a department. In fact, as will be revealed later, outsourcing changes are often shifts from one vendor to another, rather than in-house functions being moved outside to suppliers.

At the same time, fewer than 10% of the respondents see outsourcing as principally improving the quality of a package. In Part One of this survey report, comments by several respondents indicated the same functions could be done better in-house. However, PW editors were surprised that 10.6% of respondents regarded outsourcing as a method of cutting a company's materials costs.

Despite the fact that nearly a third of respondents' companies don't outsource packaging functions, those that do report a high level of satisfaction (Chart 2). This may be due to the fact that a strong percentage of respondents say their companies have established partnerships with the suppliers that outsource for them (Chart 3). In fact, the positive responses to partnerships and outsourcing satisfaction were almost identical.

The technical resource manager at a national juice processor is a strong proponent of partnerships. "Vendor partnerships bring expertise to our projects at a level we may not have in-house," he states.

As a follow-up to both questions, respondents were asked to evaluate their company's outsourcing partners' performance on a scale of "very dissatisfied" to "very satisfied" (Chart 4). In this survey, the respondents were overwhelmingly positive, with more than two-thirds saying they were somewhat or very satisfied with their partners' performance. In fact, fewer than 2% of respondents say they were somewhat disappointed with the job of their company's partners.

That's the good news. But there were some negative indicators as well. First, when asked if outsourcing partners were taking on jobs previously done in-house, seven in 10 respondents said no. Perhaps most confusing is that outsourcing does not appear to show a marked increase in efficiency at the plant level (Chart 5). Nearly as many respondents (49.5%) reported no increase in efficiency as those who did (50.5%).

While this seems to be incongruous, it should be understood that many of the functions most frequently outsourced (ie., graphics, container development) typically have little effect on packaging line efficiency.

In fact, of the Top Ten functions that our readers say are most often contracted for, only four are likely to have any effect on packaging operations: product packaging, packaging line design, machinery selection and packaging line integration.

One respondent who reported improved efficiency said it this way: "[Through outsourcing] our employees can focus on problem-solving and increasing internal efficiencies on those tasks that we do well," according to the director of manufacturing for a West Coast pharmaceutical company.

Along with the Top Ten list of outsourced functions identified last month, the survey asked respondents about which of the 15 functions specified in the questionnaire were newly outsourced last year. It also asked them to identify which ones were planned to be outsourced in the future.

This suggests that companies committed to outsourcing are broadening the functions they are contracting for with vendors. It's also interesting that two of the top three functions that were subcontracted last year related to equipment, as opposed to materials.

The top five functions that were new to outsourcing last year do correspond with those cited as being the functions that participants say will be outsourced in the future (Chart 7). Packaging line design and bar-coding requirements appear on both lists, and equipment-related functions scored high.

Finally, the survey asked respondents how their companies found the vendors that were now performing the outsourcing (Chart 8). Past experience with that supplier was easily the most important factor at 42%. Recommendations from associates or other suppliers made up another 28% of the responses, while word-of-mouth and trade shows each were the choices of more than 10% of respondents. 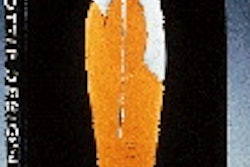 'Message on the bottle' 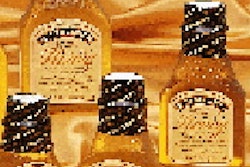 Stoller's applies a honey of a neck band 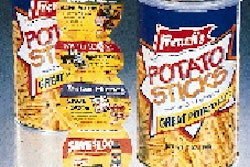